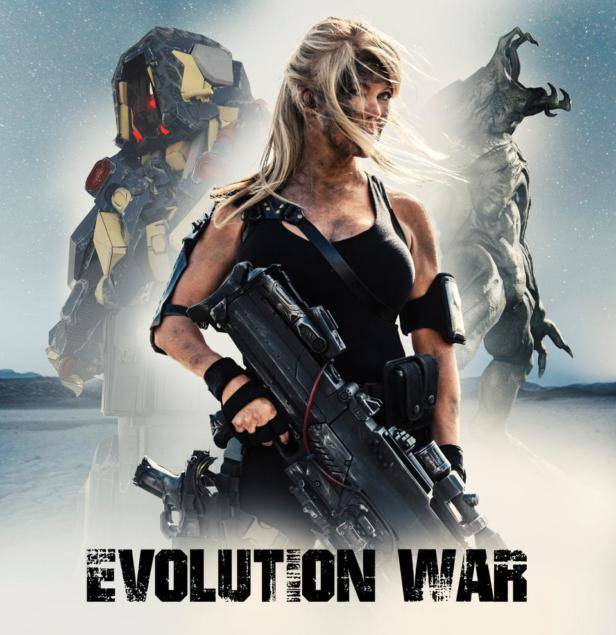 You say you want an evolution? Neil Johnson, director of many a sci-fi feature, has announced his next project, Evolution War, is nearing completion and will be released sometime this summer. This will be his fourteenth picture.

Actress Tracey Birdsall, last seen in “Rogue Warrior: Robot Fighter” and a rom-com called “Who’s Jenna…?”, headlines the picture as Angel-D, a veteran of the “Great Machine War” who returns to Earth to find humanity decimated by a terrible plague. If that wasn’t bad enough, an army of monsters is rising and threatens to conquer the planet. Good thing she brought back so many robot parts from space! With one army facing another, can Angel-D protect the Earth?

Birdsall is fresh from the award-winning Sony release “Rogue Warrior: Robot Fighter” and newly-released rom-com “Who’s Jenna…?”. In EVOLUTION WAR,  she  plays Angel-D, a hero of the great machine war who returns to Earth to discover a terrible plague has wiped out humanity.

The film reunites Birdsall & Johnson, who have collaborated together on several films, including the upcoming “The Time War”.

Currently shooting, EVOLUTION WAR is described as a mix of “Terminator” and “Pacific Rim”, a science fiction film which sees the hero forced to build an army of robots to battle an army of mysterious creatures that are taking over the surface of the Earth.

Here’s What The Cast Of The Predator Looks Like

The Bastards’ Fig Tree Coming This May