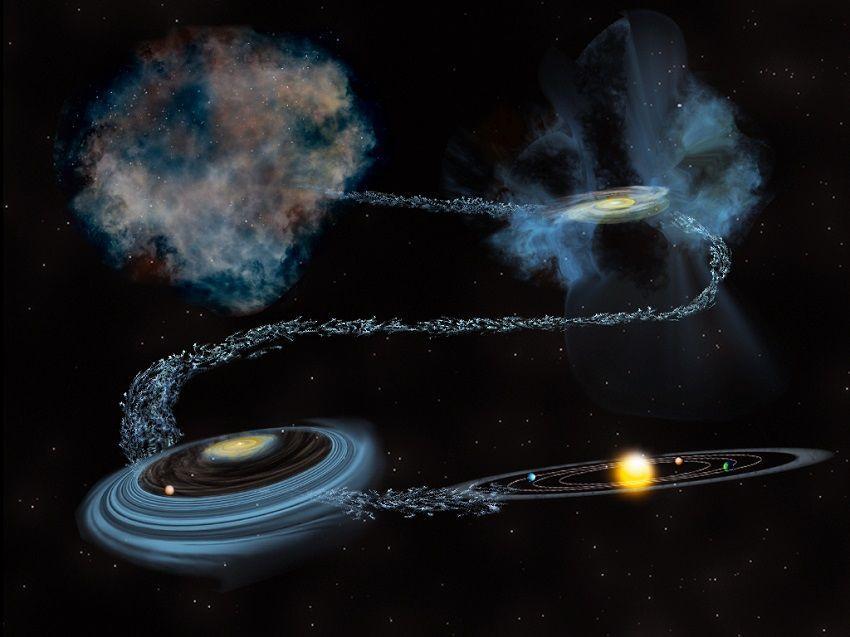 Scientists have determined a significant portion of the water in our solar system, including the water on Earth, predates our solar system and probably came from interstellar space. And that’s good news for the search for life on other planets.

Our solar system formed from a proto-planetary disc of swirling gas and other matter that encircled our sun. This mass probably had interstellar ice in it from the start, a team including the Carnegie Institution’s Conel Alexander and L. Ilsedore Cleeves from the University of Michigan concluded. The question was whether this ice has survived until the present day to become the water you put in your Slip ‘N Slide or if it was destroyed and new water was formed along with our solar system.

The key is the ratio of hydrogen and its heavier isotope deuterium in the water found on Earth, meteorite and comet samples.  Interstellar ice is more likely to have more deuterium because it forms at super cold temperatures. If all the interstellar water was destroyed, a full restart, could the solar processes produce water with the same level of deuterium in it? Models the scientists ran say no.

“Why this is important? If water in the early Solar System was primarily inherited as ice from interstellar space, then it is likely that similar ices, along with the prebiotic organic matter that they contain, are abundant in most or all protoplanetary disks around forming stars,” Alexander said. “But if the early Solar System’s water was largely the result of local chemical processing during the Sun’s birth, then it is possible that the abundance of water varies considerably in forming planetary systems, which would obviously have implications for the potential for the emergence of life elsewhere.”

So add it as another piece in the increasing body of evidence that life is likely to be a more common thing in our universe than we once thought.

“Our findings show that a significant fraction of our Solar System’s water, the most-fundamental ingredient to fostering life, is older than the Sun, which indicates that abundant, organic-rich interstellar ices should probably be found in all young planetary systems,” Alexander said.