Oblivion was the shining gem at the start of this generation. Not only did it showcase incredibly visuals for its time, but it also has engrossing gameplay as well. Skyrim looks to build off of what made Oblivion so successful as well as what made Morrowind so compelling. Hit the break to view our initial impressions of Skyrim.

Much has been made about the obvious changes to the combat system, however it’s Skyrim’s other changes that really impressed me. The menu has been completely overhauled. Essentially the menu has been broken down into four sections, items, skills, magic, and the map. There’s nothing really interesting to this approach, however when you individually explore each menu that’s when it begins to get interesting. Typically in RPG’s the whole menu carries the same general style; this isn’t the case in Skyrim. Each of the four menus carries its own distinct personality. 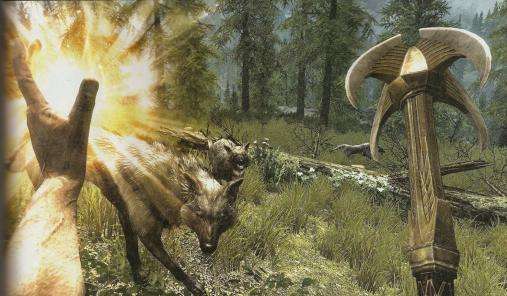 The items menus showcases basic stats associated with each weapon or piece of armor and also allow the player to fully rotate the 3D model and admire the detail. It’s all about trimming the fat, but also giving the hardcore fanbase all the bells and whistles they expect. Everything is incredibly simple, clean, and accessible. Some will cry fowl, claiming they’re stripping some of the depth; however this is a massive improvement to the overall user-interface and should be welcomed by every type of gamer.

Bethesda has openly said that Skyrim is running off of a new engine, however I wasn’t exactly floored by the visual improvement, and I’m more then a bit skeptical on how it will run on the PS3; something Bethesda has miserably failed at. Despite some of my reservations, I really did enjoy some of the new gameplay features. The 3rd-person camera looks better, and while some of the finisher moves looked a little wonky in some instances; the idea is good. The new magic system is also a breath of fresh air, and looks like a ton of fun. Players are now able to deal wield spells and combine them to create an even more powerful version of that spell. Going forward it will be interesting to see how many spell options will be available to players when the retail copy hits.

Provided the rest of development goes smoothly we can expect Skyrim to release November 2011.