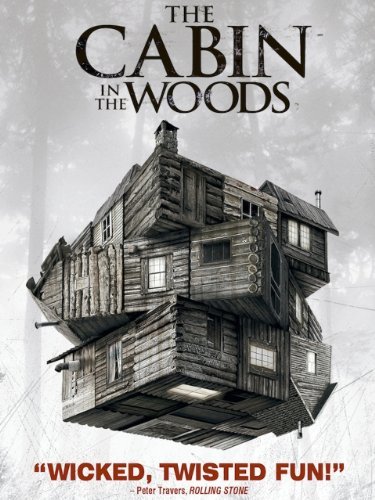 Review of Cabin In The Woods

I’m a huge fan of Joss Whedon, BTVS, Firefly, Astonishing Xmen, these are a few of my favorite things. It’s surprising it’s taken me so long to sit down and watch “Cabin In The Woods”.

The beginning of the movie is uninspired, a group of twenty-somethings going on a trip to an isolated cabin. The characters are pulled from any horror movie archetype

Curt is the macho jock.

Holden is the brains of the group.

At first such obvious choices of characters made me leery, afraid that it would slip into the usual teen scream waters. There is also an non de script office monitoring every one of the friends movements, we are only given hints as to their motives. That alone helped to differentiate it from other horror movies, as you spend at least half the movie trying to figure out possible motives.

The cabin is quickly revealed to hold a number of items, including a journal that mentions human sacrifices. The action quickly sets in as the group is assaulted by zombies, much to the glee of the office monitoring them. Marty also intermittently hears the actions that are being suggested to the group by the observers. He tries to convince the group to act counter to these instructions, but is not heeded.

The tension mounts as the group of friends is slowly whittled down, the last standing really surprised me. The characters show a remarkable drive to survive and escape the woods. It’s definitely not “traditional” horror or poltergeist or cannibal red necks hunting down college kids. The plot actually reveals itself to have heavy elements of H.P Lovecraft, the movie kept me guessing throughout.

Madonna is collaborating with Diablo Cody to write her biopic.

Dermot Mulroney Will Star In Trick

DayZ Comes To XBox One