Bad Apples clues you in to its devious nature right up front, with an opening scene so violently shocking you’ll be left wondering how far writer/director Bryan Coyne is willing to take his story of small town terror. This Halloween night kill-fest is low budget horror in the purest sense, but there’s a sense of reality throughout that is hard to ignore. Let’s carve our way through this frightening February release from Uncork’d Entertainment. 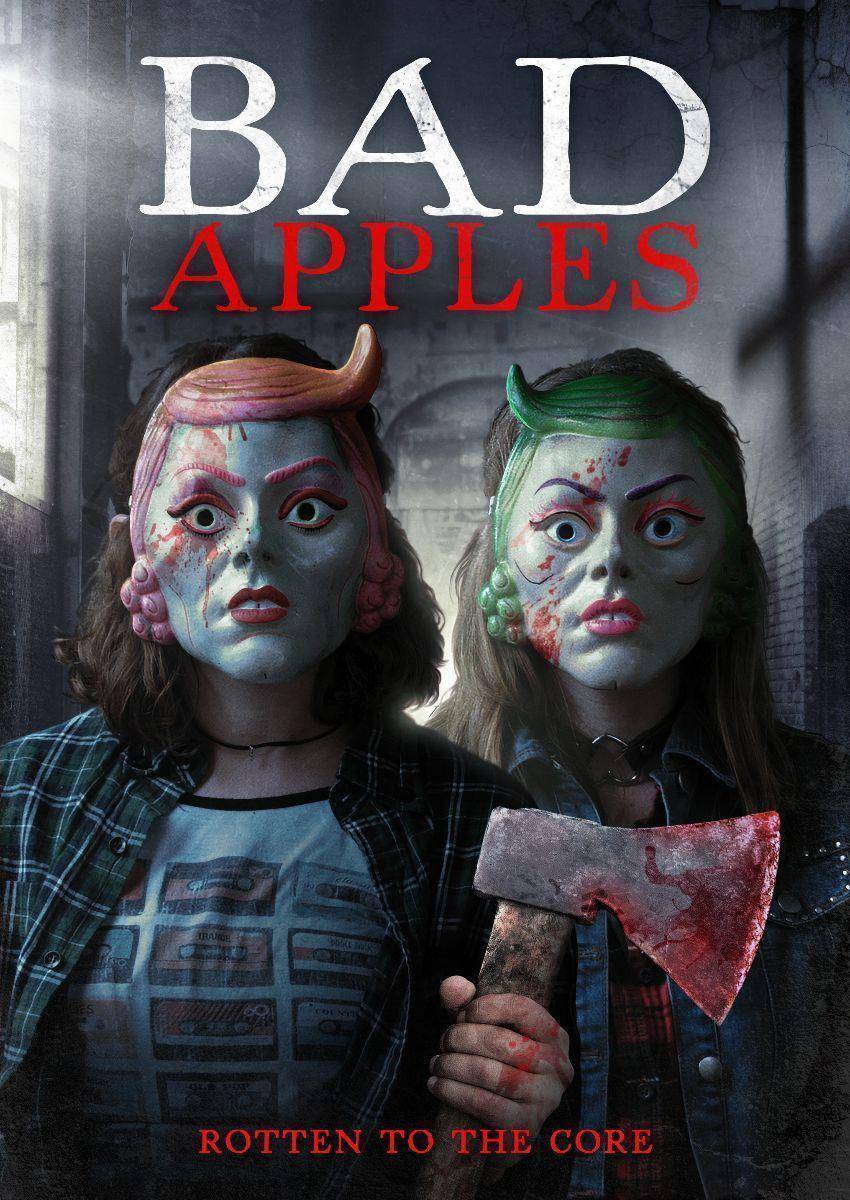 From the opening titles Coyne invokes a palpable feeling of unease as two silent teenage girls in creepy devil doll masks ride through a run-down trailer park with uncertain intentions. We are obviously meant to infer from the pre-credits scene where a pregnant woman is knifed to death on Halloween, leaving twin babies wriggling on the kitchen floor, that these are those survivors. Their mental state is what’s in question.

Interestingly enough, “The Twins” as I call them (never named in the film) are not the focus of the film. Instead we are introduced to Brea Grant’s character of Ella, a new teacher in town with a dour attitude towards Halloween. Coyne does a great job setting up his cinematic world, putting the viewer on edge by inviting us into relatable scenarios that are as tedious as they are uncomfortable.

For example, when our protagonist interviews with the principal for a teaching job, she is quizzed on her religious beliefs. Not only is this unprofessional, but ominous as the kindly grandpa quickly switches from sweet to sinister with her declaration of being agnostic. It will make many viewers flash back to moment of wanting to escape job interviews gone wrong.

A similar creepiness is present as a nosey neighbor dressed like Morticia Addams knocks at the door to introduce herself, but only after first peeking through the mail slot. With uncomfortable gossip about the neighborhood sex offender and many awkward pauses in the conversation, everyone has had run-in with this kind of socially inept individual, which really pulls you into the main story.

There is a plenty of banter about the unpacking process between Ella and Graham Skipper who plays her husband, which is surprisingly natural for such a low budget production. The dynamic of a husband who thinks he’s funnier than he is being playfully shut down by his more reserved wife is a scenario all too familiar to this reviewer, which made the writing and performances that much more impressive.

My main criticism of the film however is that there are 2 storylines with completely different tones playing out on screen during the first half of the film, which can be jarring. After 20 minutes of focus on the quippy couple meeting weirdo neighbors, the narrative suddenly cuts to scenes of brutal killings by The Twins. Random townsfolk are chopped with scythes or shot point blank in the head with little understanding as to if they deserved it.

One assumes these stories will ultimately intersect, but it would be hard to know that the characters are even in the same universe, if not for the fact that the school principal is the first victim. Being brutally beaten with a metal beer stein and then impaled with a flag pole in his office. But it begs the question, why were these teen maniacs not immediately brought in for questioning after the secretary finds the bloodied body? Since they were the last people to be seen alive with the man.

Instead of dealing with the authorities, the deadly little darlings sneak out of their trailer for homicidal trick or treating mischief. It should be mentioned that the faces of the girls are not revealed for most of the film, nor do they speak. The director opts for shots below the neck when maskless to keep the viewer uncertain as to what darkness hides behind their eyes. This is effective at creating Michael Myers style ambiguity as to their motivations, but is that satisfying?

The Twins make great movie maniacs, yet narratively the action up to this point is somewhat unsatisfying for horror junkies who like their killers to have a twisted moral justification for leaving a trail of blood through a small town. Still, the pixie like glee with which the girls dispatch with their victims is undeniably entertaining.

It’s finally at the halfway point of the film when the two stories finally intersect and Emma becomes the hunted while home alone, that the tension is palpable. The Twins delight in teasing their prey and then the film takes some weird turns. Weird, but very novel for this type of slasher scenario as the action slows down in the creepiest way possible.

The final fate of the couple is unforgettable and just when you think it’s over, another wrinkle is added to the plot. Well actually, it’s just an oddly placed coda where 2 women explain the opening murder scene in more detail as a ghost story for their pregnant friend on Halloween night. This was an unnecessary extension of the film’s run time, but it doesn’t ruin the fun to be had leading up to it.

Bad Apples is not a masterpiece, with some odd editing choices here and there, but it’s still a solid bit of gory fun. In a male-dominated landscape of few female slasher icons, the film introduces 2 great new horror figures into the lexicon. The Twins feel like they should be the next Harley Quinn for college girls looking to add a little twist of evil to their annual masquerade party outings.

If this were a bigger budget release, it feels like we would see these two haunting many a Halloween party this year. In lieu of that, the movie should at least be paying in the background. The acting is a cut above most low-budget horror with enough clever twists to keep you coming back for more.

Bad Apples is available now from October Coast on VOD and it’s definitely worth a watch!