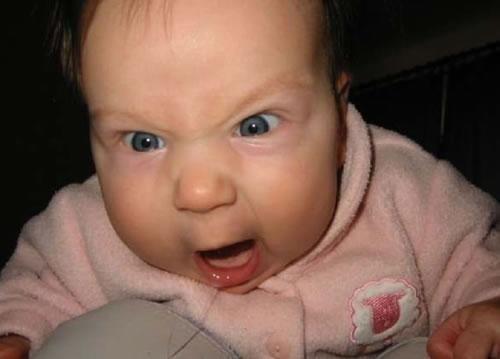 Here’s an experiment to try before continuing with this article. Go outside and do something to make someone mad. Like really mad. Seriously, do it. Go on, it’s for science. I’ll wait.

Are you finally back? Sorry about whatever trouble you got in, you probably shouldn’t do things just because internet articles tell you to.

But what about that face, huh? Unless the person you chose to piss off  is really good at controlling their emotions, they made a face I’m sure you recognized. Flared nostrils, lowered brow, lips thin unless they were open to scream at you. It’s a scary face. I can imagine you’re making it right now if you actually went outside and did the experiment.

Scientists say this “anger face” is universal across cultures and is built in from birth. Even children who were born blind and have never seen the “anger face” make it.  Researchers at UC Santa Barbara and at Griffith University in Australia have new findings about how the anger face evolved and why.

“The anger face not only signals the onset of a conflict,” said lead author Aaron Sell, a lecturer at the School of Criminology at Griffith University in Australia. “Any distinctive facial display could do that. We hypothesized that the anger face evolved its specific form because it delivers something more for the expresser: Each element is designed to help intimidate others by making the angry individual appear more capable of delivering harm if not appeased.”

The researchers created computer composites and showed that each elements of the anger face, including a lowered brow, cheekbones raised in a snarl, thin and pushed out lips, all made test subjects report that a face appeared physically stronger.

“Our previous research showed that humans are exceptionally good at assessing fighting ability just by looking at someone’s face,” said Sell. “Since people who are judged to be stronger tend to get their way more often, other things being equal, the researchers concluded that the explanation for evolution of the form of the human anger face is surprisingly simple — it is a threat display.”

Just like puffing out your chest or standing up straighter, looking mad is a way to intimidate a possible foe and show them that crossing you will cost them, said John Tooby, UCSB professor of anthropology and a co-author of the study.

“This makes sense of why evolution selected this particular facial display to co-occur with the onset of anger. Anger is triggered by the refusal to accept the situation, and the face immediately organizes itself to advertise to the other party the costs of not making the situation more acceptable. What is most pleasing about these results is that no feature of the anger face appears to be arbitrary; they all deliver the same message,” Tooby said.