The last time we reported on the sci-fi horror RPG Hellpoint, we said it had been given an April 2020 release date on all devices. The Switch version hit a delay, though, and we haven’t heard anything about its release until now. To make up for the wait, Merge Games and publisher tinyBuild are giving us a physical version! 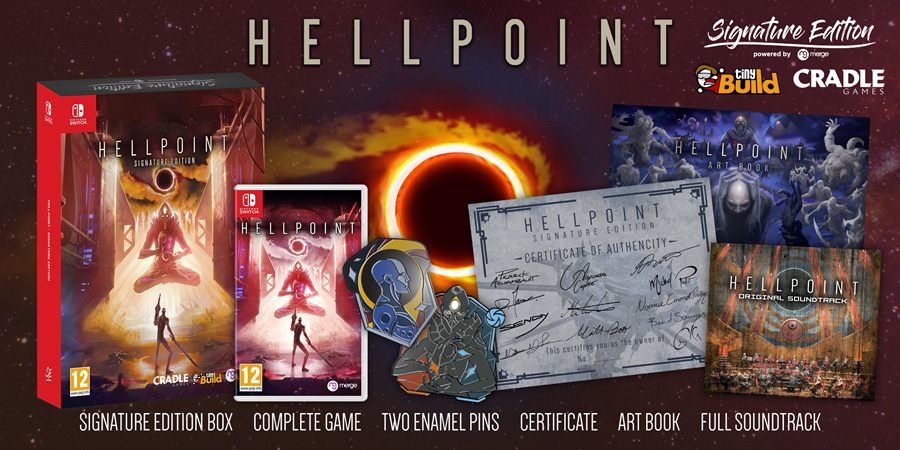 Preorders for a Collector’s Edition physical of Hellpoint on Switch and PS4 are open now. For $50 you’ll get a soundtrack CD, a 44-page artbook, and two limited-edition enamel pins. If you just want a copy of the game itself, that’s also available for $35. They’re UK releases, but they’ll work in all versions of the Switch and PS4. Copies will begin shipping out February 26, one day after  the digital Switch release.

Hellpoint is part Dark Souls, part Event Horizon. You’re a crew member of the ill-fated Irid Novo space station, and you wake up one day to find the entire station has been affected by a massive quantum cataclysm called the Merge. Maybe orbiting around that black hole wasn’t such a good idea, but now the consequences are foisted upon you. As you battle the monsters that now populate the hallways, you’ll be unraveling a mystery that exposes the truth about the universe on a cosmic scale.

* Souls-like gameplay in a unique setting: Explore the derelict space station of Irid Novo and face bizarre enemies with a tight and unforgiving combat system.
* Occult space story: Blending science and fantasy, the intensely atmospheric dark sci-fi setting will keep you searching for answers.
* Dynamic World: The Quantic System acts as a dungeon master; slightly transforming the game world every time you die and triggering events as the station revolves around the black hole.
* Jump-in co-op and PvP multiplayer: Ask a friend to press Start to join a couch co-op session or call for assistance online. Hellpoint offers a full, uninterrupted co-op story with shared loot drops.

Hellpoint is available now on Playstation 4, XBox One, PC, Mac and Linux, and should finally be out for Switch February 25.