What Can The CW’s Midseason Ratings Report Tell Us About Its Future?

It’s almost January which means we’re close to the point where The CW announces the first of its fall renewals, and typically this has meant they renew everything. But might that happen this year? We can glean hints from the ratings report published by TVLine today. Here’s how everything is performing. 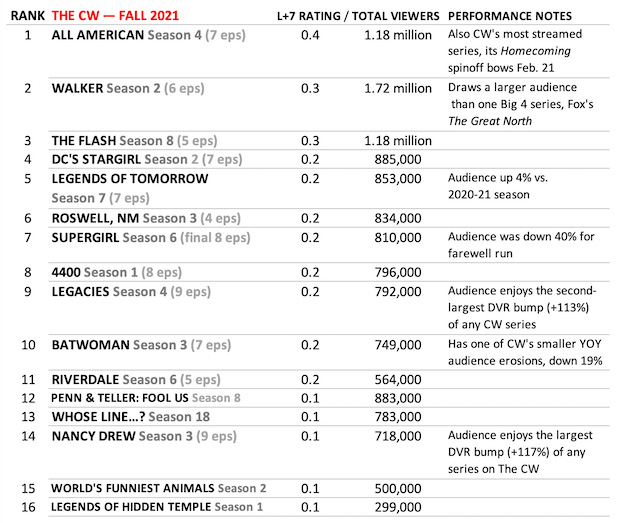 First off….guess which scripted show got the lowest ratings of the fall? Yup, the current best show on the network, because they stuck it in their worst timeslot. If there’s a silver lining for Nancy Drew, it’s the notation that it has the largest DVR bump of any CW series by a mile. That means its fanbase has not abandoned it…it just CAN’T WATCH THE THING LIVE WHEN IT’S STUCK ON FRIDAYS AT NINE!

You didn’t believe me when I told you All-American is The CW’s current best performing series…well, here’s the proof. No one you know may be watching it, but someone out there is. Walker is also surprisingly #2 and keeping its head above the million mark. Does Jared Padalecki have that many diehard fans, or is there a weird, unexplained post-Millennial nostalgia for cheesy CBS roundhouse-kick shows?

It should be no surprise that the audience for Batwoman is slipping, but The Flash has been even worse in quality lately and its needle hasn’t moved one bit. It’s unsinkable. It’s in the same position it was in five years ago, as The CW’s most popular superhero show. You can’t tell me THAT many people find Chester P. Runk a suitable substitute for Cisco.

Finally, The CW’s Legends Of The Hidden Temple revival performed horribly even by CW standards, which is why I believe it will break the streak and become the first fall-debut series in years The CW does not bring back for a second term. Everything else has a shot, based on past behavior at the network. We’re really hoping Drew can pull through.