There’s a point in this episode where Clementine asks Javi about why she’s “bleeding”. As in not from a wound sustained in battle, but naturally bleeding. This kind of awkward conversation is what you can expect from Walking Dead  A New Frontier Episode 4. No, seriously, there’s a lot of conversations like this.

The real problem with this episode is that though it tries to focus on the relationships had between many characters, it’s either badly timed, completely illogical, something gets omitted, or just plain weird, or wrong, or stupid. Take your pick.

To be fair, there are some good parts, such as when the episode starts and we get to see the brotherhood of Javier and David on display before things went to the zombies. It’s a good feeling (depending on what you say of course) to know that even though David is a hothead, he does trust you with his family while he goes back to the army. And it’s that same trust that he is looking for again when you’re locked up by Joan.

What follows after that initial lockup is a LOT of conversations, detours, gun running missions, and encounters that makes you wonder just where everything is going. Remember, this is the penultimate episode of the season, so you’d think that things would gradually pickup, and yet, for a long time in the episode, it stays stagnant.

For example, a big theme of the episode is whether Gabe can be trusted, and this theme gets played up a lot. At points he’s darn helpful, but then at other points he’s a bratty teenager, one who should know better when saying certain things. He causes a division in the group that was so stupid they don’t bring it up again. I mean, seriously kid, what the heck?

Thankfully, the Javi and Kate stuff was much better. Admittedly, she had a lesser role here, but when she did come out to talk or take action, it worked well. Including (again, if you made the right choices) her admitting her feelings for Javi, and him saying he felt it too. That was many episodes coming, and then, well, I’ll let you see. 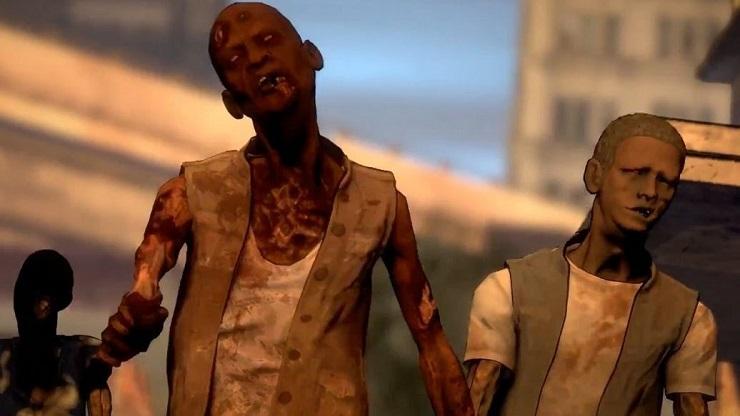 Sadly, the other characters barely fared as well. Trip and Eleanor had easily the worst VO of the episode. And what’s worse, is that their characters seemed to be focused on something that should NEVER have been brought up at this point in time. Then, Tripp is almost killed, Eleanor isn’t shown except for one moment, then never seen again, even though she should’ve been in basically every shot.

Even Clementine wasn’t that interesting here. Her flashback was odd and pointless, and seemed contradictory in regards to continuity. And though her “bleeding” conversation was hilarious, I hated that they kept bringing it up. How awkward did they want us to feel? Though I did laugh when she used her “feminine wilds” to persuade Gabe to listen to Javi. The rest though? Not so much.

All that being said, the final 15-20 minutes was some of the most powerful and tense stuff in the entire season. David is sentenced to death, and there are so many twists and turns here that you won’t know what’s coming or how to react at times until the screen goes black to end the episode.

The problem though, is that the ending scene doesn’t make up for some of the dumb things that led up to it. Add to that, some of the choices made by the “villain” of the story seemed very odd. She tried to kill two people, then make Javi decide who should die, all in front of a crowd of people she was trying to convince to see that she wasn’t the villain! How does that make sense?

In the end, Walking Dead  A New Frontier Episode 4 had a great ending, but the buildup was shoddy, the characters were either poorly used or ignored, and a ton awkward scenes and dialogue really weighed it down. Let’s hope the finale really makes up for this.

PUBG And The Walking Dead Unite In Mobile Giveaway

There’s a special Walking Dead-themed event happening in PUBG, but you have to be playing the mobile version to take part. The main attraction is the ten iPhone 11 Pro Maxes the game is giving away throughout October, but you stand a better chance of winning the other prize —

It’s been an open secret for several months that AMC wants to expand the presence of The Walking Dead on their channel even further than what already exists, by launching a third series set in Robert Kirkman’s post-apocalyptic world. Today was the day they made an official announcement. This yet-untitled

A giant shockwave hit the gaming newsfeed Friday afternoon with reports that Telltale Games was filing for bankruptcy and would cease operations immediately. Their entire payroll was let go that very day save for 25 people, who were being kept on to finish up an unspecified project. It was everyone’s

OVERKILL’S The Walking Dead is aiming to be a very special entry into the Walking Dead franchise, a franchise that has a successful comic, TV series and spinoff, and video games. But this video game will be very different, as it’ll focus on cooperative gameplay starring four characters who are