Babysitters and horror are like peanut butter and jelly, a combination that has proven time and again to be the recipe for blood drenched fun. The Night Sitter carries on the tradition of films like John Carpenter’s Halloween and When A Stranger Calls while adding it’s own colorful twist to the genre.

I prefer my horror films to have a bit of artistry to them. That’s not to say that classics of the found footage genre like The Blair Witch Project or Paranormal Activity aren’t effective in delivering scares, but there’s something much more satisfying in knowing the gruesome storytelling was carefully crafted for maximum discomfort. 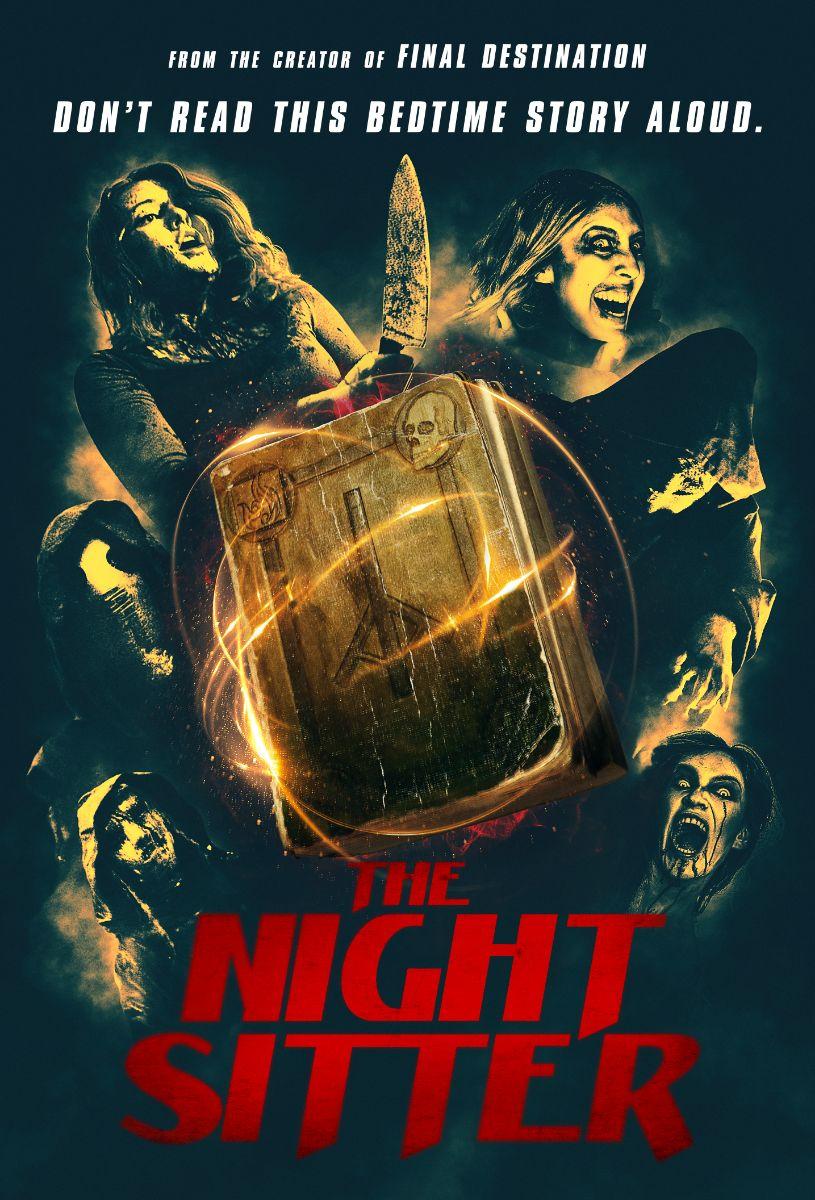 In the case of The Night Sitter, filmmakers Abiel Bruhn and John Rocco gave special attention to creating an atmosphere of terror with colorful lighting in each scene, which gives their film a fresh and exciting visual signature. Bold green and red lighting accentuates the Christmas time setting of the story, while adding a Tales From The Crypt style comic book aesthetic that invites the viewer to have fun with the brisk and clever film.

Plot: A con artist poses as a babysitter to steal from a wealthy occult enthusiast. One of the kids she’s sitting unwittingly summons a trio of witches known as The Three Mothers.

While most babysitter slashers position the teenage caretaker as an innocent and virginal figure, The Night Sitter spices up the formula by making our sitter, Amber played by Elyse Dufour a thief who uses the babysitting gig as a cover to case a home for robbery.

In this babysitting scenario the home belongs to a would-be celebrity paranormal investigator named Ted, played with an off-kilter comedic sensibility by Joe Walz. You know something is strange about Ted from the get-go, but is he just an awkward aspiring TV star or hiding a darker secret in his home office, which is “off limits”.

Tasked with babysitting Ted’s troubled son, Kevin who has been having visions of demons who taunt him from the bedroom closet since his mother died and Ted’s girlfriend’s snot nosed brat, Ronnie it’s not hard to say that Amber has her work cut out for her. Both young boys are fantastic in their roles with Jack Champion playing Kevin as a likeable, but morose pre-teen and if you don’t want to punch Bailey Campbell’s Ronnie within the first 5 minutes, you are a far better person than I.

Elyse Dufour shows range as she easily takes to her role as the leader of the heist, but also does a great job embodying a conflicted human being who is sympathetic to Kevin’s trauma. Of course, that’s not enough to call off any of her criminal plans for the evening. Despite constant interruptions from the nosey neighbor, played with Kevin Smith like charm by Ben Barlow and her goody two-shoes boyfriend Martin, Amber presses on, not knowing the frights this particular house has in store.

As it turns out, the boy is not imagining the paranormal goings on in his home and as soon as Amber’s crew arrives the creepy crawlies come out to play, turning this simple robbery into a race for survival against dark forces hat want to take Kevin by Midnight. At its core The Night Sitter is a haunted house film, but with scares feel more functional than frightening. That is to say that the film focuses more on creating interesting and engaging characters than mere jump scares.

The supporting cast of crooks such as Rod, played by the energetic Jermaine Rivers and his amorous girlfriend, Lindsey played by Amber Neukum add a lot to the fun of the film. This is especially true when Bruhn and Rocco pay homage to The Evil Dead with Lindsey being transformed into a malevolent, shreaking ghoul-friend which has Neukum chewing the scenery like a madwoman.

The nightmarish goings on come courtesy of The Three Mothers, a trio of cloaked figures in masks who taunt and torture all who have dared to enter the Hooper home. Expect throat slitting, scalping, impaling and plenty of other blood soaked madness as they try to force Amber to give up Kevin to fulfill their dark and nefarious ends.

While there’s plenty of gore, The Night Sitter doesn’t rely on cheap scares. The film has atmosphere to spare, using the previously mentioned lighting schemes to make you feel the tension of each scene, but also creates an almost Rave like party environment on screen. Not to slight the film in the least, but The Night Sitter would make a great background film to help set the mood for a casual adult Halloween party. Somehow without taking it’s horrific elements to extremes, the film still creates a sense of devilish fun.

The Night Sitter’s greatest strength is the brisk pace of the story that is carried through by the performances of the energetic young cast. I never noticed a lull in the action, yet it never feels like a walk through a neighborhood haunted garage either. There is a story here that manages to work in character development along the way. As a reviewer I often have to take a break from film’s that just don’t understand storytelling, but The Night Sitter was a one sitting viewing experience where I didn’t dare look away.

Bottom line, the film fires on all cylinders from the soundtrack to the graceful camera work and editing which combine to produce a night of respectable chills and thrills. If you’re looking for a creepy and colorful horror adventure, The Night Sitter will deliver.

The Night Sitter is now on DVD and VOD from Uncork’d Entertainment.