The Kids Are Back In Dungeons & Dragons: Saturday Morning Adventures

There’s a new movie set in the world of Dungeons & Dragons coming soon, and it’s not the first one. But way before any other type of media existed, way back in the early 80s, when the game itself was young, there was just ONE Hollywood interpretation of D&D. For many, it was their introduction to the notion that the game existed. We’re talking, of course, about the Saturday Morning cartoon.

In 1983, six children boarded a rollercoaster ride themed after Dungeons & Dragons, but something went wrong and they were somehow teleported into the Forgotten Realms itself. Now Hank, Diana, Sheila, Bobby, Eric and Presto (that probably isn’t his name but who knows what it really is) have been assigned the roles of ranger, acrobat, thief, barbarian, cavalier and magician respectively. They each have magical weapons that can aid them with their skills — Sheila, for example, can turn invisible with her cloak.

Their long-term goal is to find a way home, but their more immediate concern is to dodge attacks from the forces of Venger, the evil force who is after their weapons to make himself more powerful. Unlike a lot of softened-up, heavily censored cartoons of this era, Dungeons & Dragons managed to maintain a sense of tension and real danger. Even if no one ever truly got hurt, you got the sense that if Venger ever caught them, they WOULD be.

Now thanks to IDW, they’re back! Dungeons & Dragons: Saturday Morning Adventures resurrects the characters and premise of the 80s cartoon for four enthralling issues, led by writers David M. Booher (Canto), Sam Maggs (Rick and Morty Ever After), and artist George Kambadais (John Carter of Mars).

“As a lifelong D&D fan, it is an absolute dream to get to work reviving a childhood classic,” says Maggs. “It’s been such a blast working with IDW and the fine folks at Wizards of the Coast to home in on what made the Dungeons & Dragons Saturday morning cartoon such a cult favorite. Setting these characters up for a whole new run of stories has truly been a career highlight, and I hope fans will love seeing Uni (well…all our cool kids, but especially Uni) back in action as much as I do!”

IDW’s press release makes no mention of when the first issue of Dungeons & Dragons: Saturday Morning Adventures will show up (weird). Just keep hanging around your comics shop until it appears, we guess. 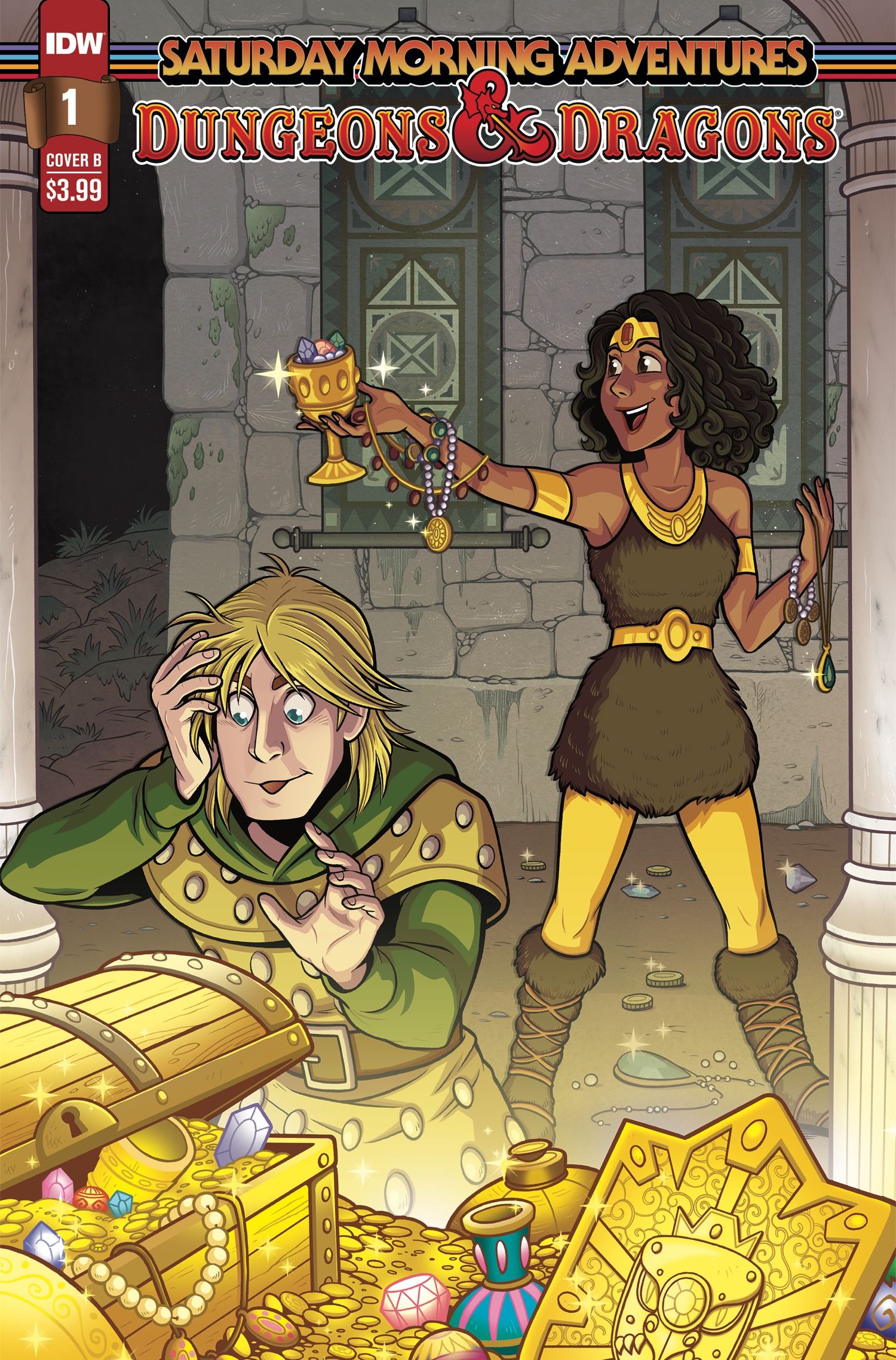 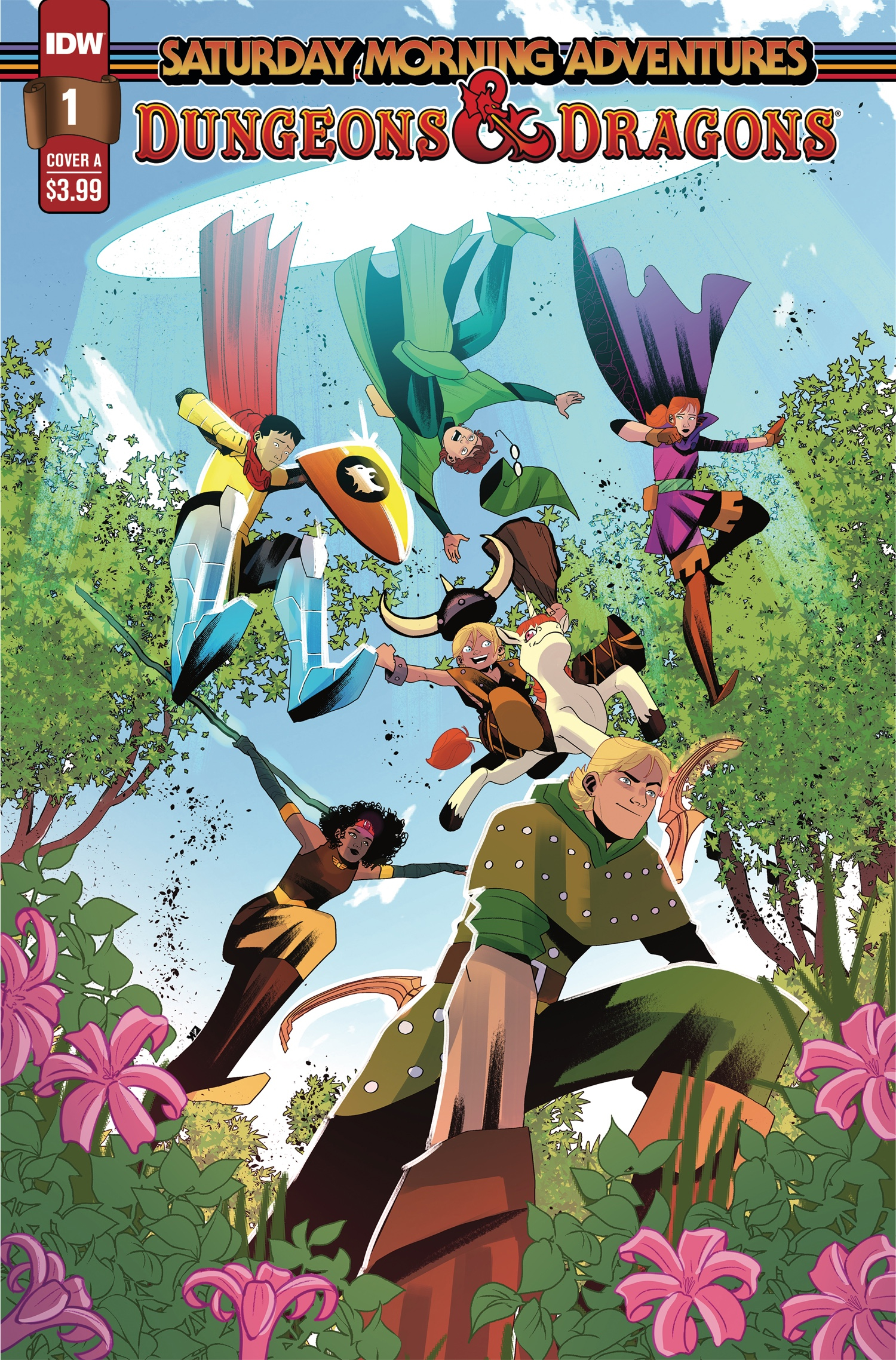 You Win: Wizards Of The Coast Will Leave The D&D OGL Alone

I have a blurry memory of this cartoon as a kid. All I remember is that a group of teens goes in a carnival ride called Dungeons and Dragons and they got transported into a different world. The boy who became the Knight is also super annoying. It lasted for three seasons I think.

Even if it's only going to take place in the comics, I really, really need there to be some kind of conclusion to this story, and I really, really hope that IDW will make that happen. The last panel of the cartoon that aired on Saturday morning was missing its conclusion. Instead, the pivotal scene is retold in the form of an audiodrama, with several of the original cast members acting it out once again. Something you can see is better than something you can hear though.

The Jem and the Holograms story has been retold by IDW Publishing, and it is a vast improvement over that awful Hollywood version. I have faith that IDW will be able to treat Saturday Morning D&D with the esteem that it warrants. It is very similar to an Isekai, with the exception that a group of people are transported rather than a single person. Because Toei Animation was the company that created the animation, one can say that it had an impact on subsequent Anime. I mean that there is an overwhelming quantity of isekai in Japan.

It didn't strike me as an especially entertaining program, but I wasn't able to watch it when I was younger, and the only parts I've seen are snippets on Dailymotion and YouTube. In light of this and the D&D-branded films that have been produced, I think it would be best for them to stick to tabletop and video games. Personally, I think that neither the movie nor the cartoon's scripts were written by D&D players. Instead of emphasizing the characters and who they are as people, they place an excessive amount of emphasis on the classes and what they can do.

This is IDW though, this comics company had been able to turn turd into gold with all their adaptations.

I've only seen titbits online, but wasn't it a major plot point that the kids were "Isekai'd" to the D&D world and never returned because the show was cancelled? . If they actually make an effort to resolve the story once and for all, that is very commendable of them. As a result, the publication of this comic will make it possible for these children, who have spent an unending amount of time in the D&D universe, to leave and go back to their own world.

It's a good thing they changed Diana's leggings to the Acrobat design because the ones she was wearing before were way too revealing and hoochie for a girl of her age. When I think back to the 1980s and 1990s, I can't believe how sexualized underage cartoon characters were portrayed. Do not accuse me of being a prude; the fact that Wonder Woman is an adult 100 years old means that I have no problem with her wearing her unitard and corset. Diana the Acrobat on the other hand has not yet reached high school. She is still a middle schooler.

The script for the final episode, which was titled "Requiem," has been circulating on the internet since the 1990s. It was in its original form when I read it, as I recall. I really hope that, now that they have the publishing rights to these comic book adaptations, IDW will make good use of this opportunity. Some one made a fan made live action movie of this canceled finale too but I don't know where to find it.

@Speitzarmunster A fan animated that finale script and uploaded it in Youtube years ago. So you can finally have the closure you wanted.

@toddj82 I never asked for it but thank you! You made my day! A gap in my childhood got filled.

I remember those conservative parents accusing this show to be too violent for tv. 😅 I mean it is too tame compare to anime and a lot of shows kids watch these days. Oh, how I miss the late 1970s and 1980s, when toys and cartoons encouraged kids to use their imaginations. If it weren't for the cartoon, I wouldn't have known anything about Dungeons & Dragons (D&D). I really liked watching this when I was a kid! I have never played table tops, but I really liked this cartoon and was sad when it ended. I hope this comics will get to live by the essence and spirit of the cartoon. I am more into Anime but I did love this cartoon.