The Jurassic Dead is a wild new film from writer-director, Milko Davis and Thomas Hartwick that contains some very familiar DNA in a fast-paced prehistoric package. There’s plenty of fun to be had in this sci-fi horror adventure featuring practical dino effects that leave a bloody mess of fun in their wake. 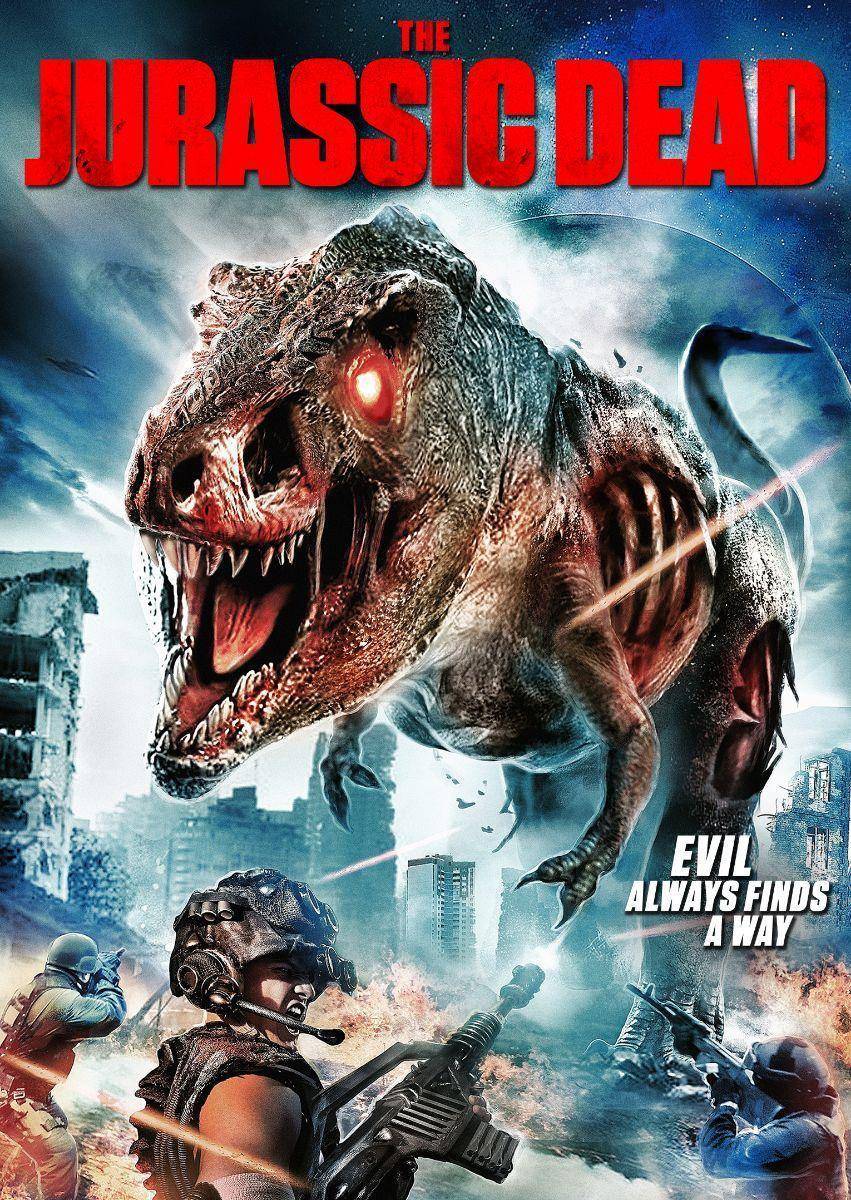 Some indie action films are overly ambitious when it comes to the scope of their stories, trying to mix pathos into characters using actors are not capable of conveying such emotion convincingly. The Jurassic Dead on the other hand knows what we want and how to deliver it. Snarky dialogue and cretaceous carnage are the two main ingredients of this tale of titanic terror.

Here’s the plot: A unit of mercenaries must team up with a group of tech-geek students after America is struck with an EMP attack. Deep in the desert, they find the source of the terror, a mad scientist who has also just created a living dead T-Rex dinosaur, one who turns everyone it attacks into a zombie. Now they must scramble to stay alive and save the planet from the ultimate undead predator. 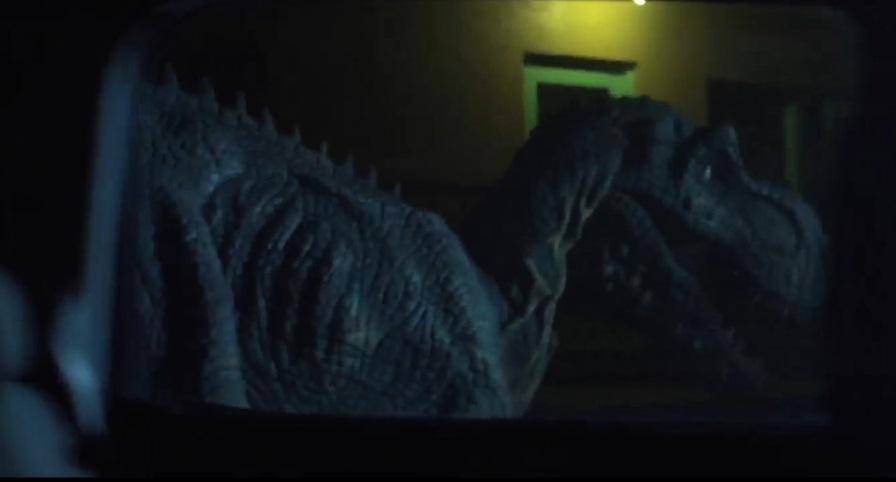 One of my all-time favorite episodes of Mystery Science Theater 3000 is Future War, which features dinosaur trackers (practical puppets shot using forced perspective techniques) controlled by cyborgs coming to Earth to wreak havoc. The Jurassic Dead feels like a spiritual counterpart that 90’s direct to video romp. Did I mention the filmmakers employ an actual, physical dinosaur puppet for their Z-Rex creature? I’ll admit that I did and I’ll do it again.

Shot in low light, the decaying dino doesn’t look half bad, especially in the opening scene as the mad Doctor Wojick Borje (Matt Block) brings the creature back to life with what appears to be a leftover supply of Dr. West’s glowing green serum from Re-Animator. Where the doctor came upon the corpse of an actual T-Rex to resurrect is a question left unanswered, but it’s safe to say that InGen had a liquidation sale after the incident at Jurassic Park.

The characterizations in the film are broad, we literally get no backstory for anybody with the exception of our fiendish mad scientist, but that is to the benefit of the film. You see, Davis and Hartwick could have given us a straight horror story of college kids being terrorized by a zombie dinosaur, but by mixing a James Cameron style Aliens crew of military tough guys into the proceedings, it’s a two for one deal. With this many characters trying to escape Dr. Borje’s compound with limbs still in tact, there’s very little time for chit chat.

As the main story begins, we find four co-eds travelling through the desert on a road trip that match your standard movie archetypes. We’ve go the ditzy blond, Roxanne (Nicole Goeke) and her jock boyfriend, Gunnar (Ben Johnson) at the wheel being taunted by the pot smoking tech-head Cam (Adam Singer) who is dating Roxanne’s computer programming slacker sister, Sadie (Mia Klosterman). The straight laced quarterback doesn’t like (or understand) the insults of the wiseacres, but soon a new problem arises as an EMP blast knocks out the car’s engine.

Of this crew left to wander the desert for shelter, Klosterman really stands out as far as screen presence. Granted, she also has the best dialogue, dropping pop culture and video game references throughout the film’s running time. 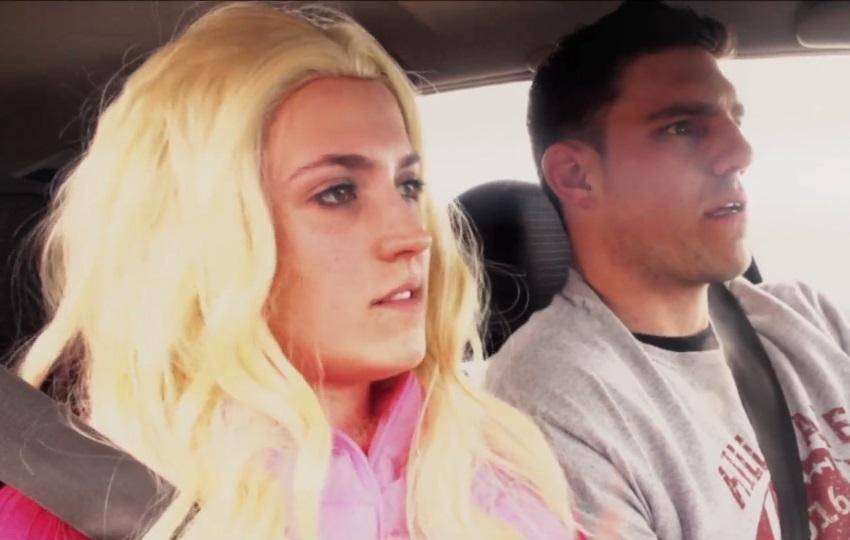 Also in this opening I couldn’t help but stare at the horrendous wig on Goeke as Roxanne. The hair piece is so fake, I thought it was going to be a major plot point where she reveals herself to be a brunette and Gunnar breaks up with her. Very odd.

No sooner do the kids stumble and grumble their way into a mysterious bunker in the desert, than a group of black-ops soldiers enter the picture in style. A laborious slow-mo shot is played for comedy as they strut into their mission, eventually taking aim at the camera to confirm their bad-assery. 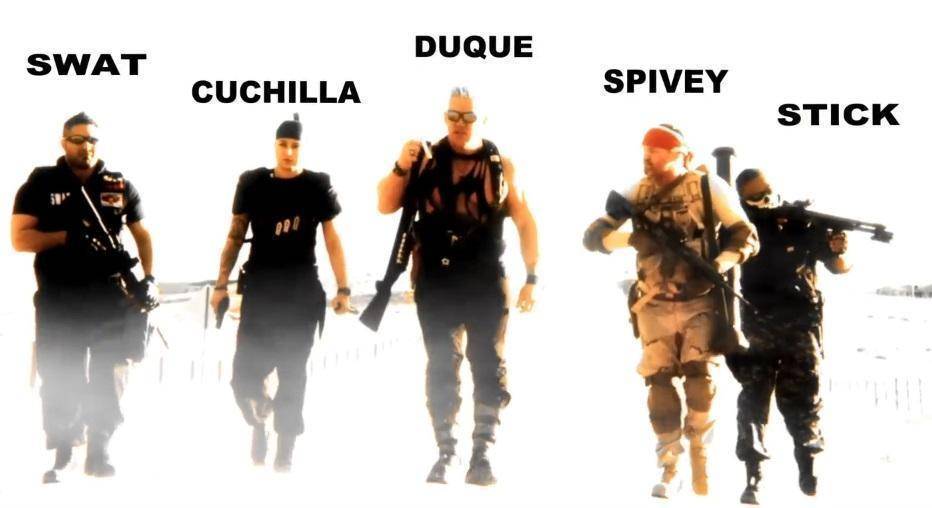 Once the groups cross paths inside Dr. Borje’s twisted funhouse, he appears in a holographic projection now looking like a cross between Jigsaw from the SAW films and Joseph Gordon-Levitt’s Cobra Commander in G.I. Joe The Rise of Cobra. Announcing his plan to plunge the world into chaos the heroes get on with attempting to disable his machinery before the Z-Rex catches them. 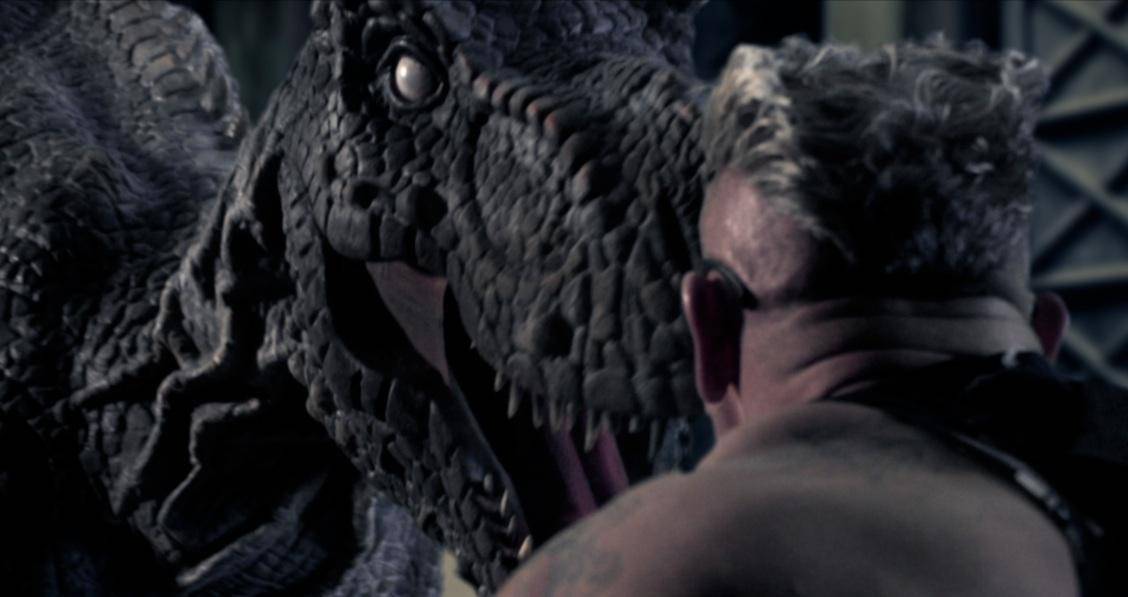 But first things first, the muscley sargent drops his weapons and puts up his (ahem) Duques, challenging the the decrepit dinosaur to a fist fight. I recently reviewed a similarly titled film, The Jurassic Games, wherein a man uses Kung Fu techniques against raptors, but watching a T-Rex get punched in the face and spit out sharp teeth was a laugh riot.

What follows is a Resident Evil style race against the clock, as the Z-Rex was most definitely not down for the count. Characters split up and are split open as the timer runs down the minutes until doomsday. The Jurassic Dead introduces a unique twist in that those that do find themselves in the jaws of this vicious predator return from the dead to amp up the tension with zombie attacks of their own.

The most impressive of these is Duque’s transformation. Haman is already intimidating to look at, but with some Buffy The Vampire slayer style facial appliances and green tinted glowing eyes, he’s like a monstrous mash-up of The Incredible Hulk and the Green Goblin as he terrorizes his former teammates. 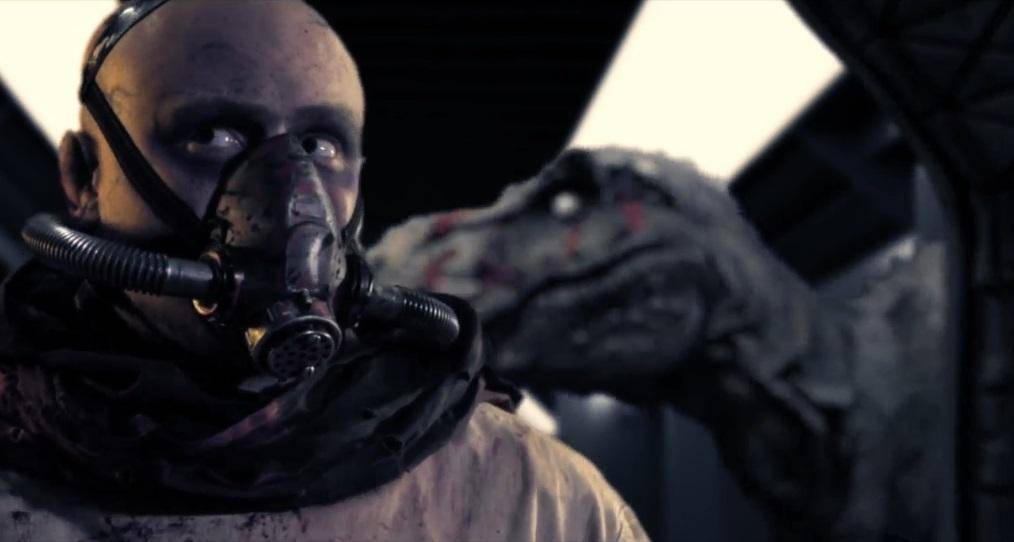 The pace of the film is to be applauded, as the deaths are not lingered on. Rather characters are taken out at random by both human and zombie means. Though some clunky transitions between action set pieces and CGI background inserts are apparent, the fact that the audience is primed to look out only for the next bit of madness makes these choices forgivable.

The Jurassic Dead would feel right at home on the SyFy channel, though maybe not quite as tongue in cheek as Lavalantula or Sharknado. Though it does deserve one more shout out for some heartwarming practical effects (including a demon zombie cat). By throwing Jurassic Park, The Walking Dead and Resident Evil in a bloody blender it keeps a frantic pace and never overstays its welcome.

You can find The Jurassic Dead now on VOD from Wild Eye Releasing or the exclusive DVD/Blu-Ray combo at Walmart stores nationwide.