If you think about it, RPGs are one of the most important, yet most used, franchises in video gaming. I don’t mean that as an insult, but the fact of the matter is that it’s honestly a bit easy to make an RPG if you follow a few simple rules and guidelines.  So finding an RPG that actually stands out from the crowd is not only important, it’s rare. Thankfully, The Greater Good is a game that takes the old-school, the new school, and brings them together in an intriguing mash-up full of fun and fourth wall breaking.

I’m going to do my best to keep some spoilers out of this review because I feel this is a game you should enjoy without knowing everything, especially if you’re reading this review in the hopes of getting an idea of whether you should purchase this game or not.

The game starts out with a soldier named Flint, he’s part of the army and is chasing down resistance fighters who would stand against his Lord, King Kro. This may sound basic, but there’s a catch, he has abilities. Not just any abilities those, he’s an Elemental, one who is attuned with magic of a certain attribute. In the world of The Greater Good, that’s important.

For you see, the world was once full of magic, but two beings argued over what to do with it, and so a war began, one that would waste much of the world. In the end, good prevailed, but at a cost, a very terrible cost, several in fact. And because of this, magic was thought of as evil, and the world went on without knowing of the magic in it, or the beings of pure magic that still resided in it.

This matters with Flint because after finding a “comet”, a demon is unleashed, and said demon notices Flint’s abilities, prompting King Kro to “kill” him in order to start a great journey to rid all magic away from the world once and for all.

Admittedly, this isn’t the most original story, especially when you find out that Flint is indeed a “child of destiny” character. That being said, it isn’t all basic and simple. In fact, one of the things I loved about The Greater Good is that there’s a lot of worldbuilding that’s done in a very simple yet impressive nature. From how Flint is a child of destiny, to how certain characters connect with one another, to the true state of the world and those in it, and more. Most games get away with some simple worldbuilding, but this is much better, and it helps paint the world in a much better light.

Speaking of paint, The Greater Good takes advantage of a basic, yet stylized version of graphics in order to make itself stand out more. It’s a mix between cutouts and 2D animation that honestly really works. I’ve said for years that you don’t need to have “super HD deluxe” graphics in order to make a game beautiful, or detailed, and that’s the case here. Every character stands out in their own way. You can see their skin color, clothes, tell their rank at times, it’s all basic, yet detailed. And when you see some of the monsters in the game, you’ll notice that the “basic” looks don’t make them any less intimidating.

It just goes to show how little it takes to be different from the others. There are cutscenes even with the simplified graphics, and when you get introduced to something new, you look for all the special details that help it stand out, like the City of Lumos that you visit. This “Frozen City” is special because of its layout, but when you compare it to Becket (not so affectionally called “The Bucket”, you’ll see just how different it is in terms of looks, tone, and layout. 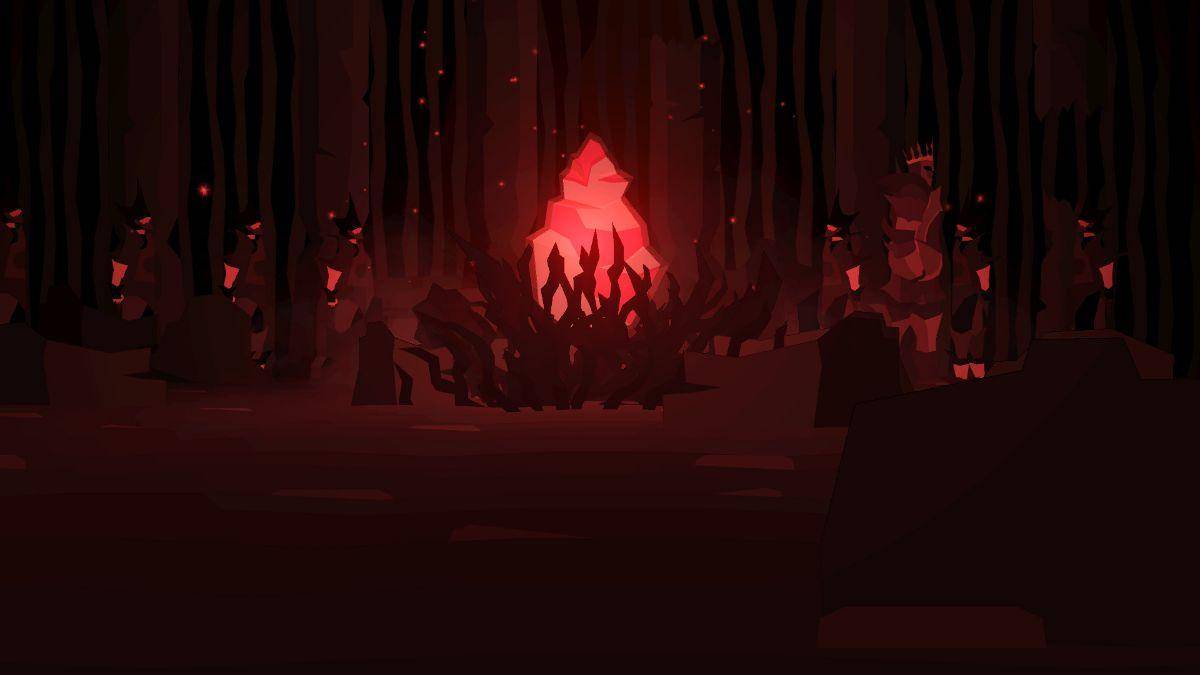 Speaking of layout, the game is all too happy to have you wander around certain places at your leisure. The game is “open world” in certain aspects, but not in others. There are sidequests you can do, including some you may not realize you’re doing at first, but will seem obvious to take part in when you talk to people. There’s also the freedom to choose when you leave certain areas, so that if you need to train more, you can without issue.

Which, naturally, brings me to the battle system for the game. The way to make you picture the game is something like Final Fantasy 7. It’s turn-based, but yet is still focused in real-time. Every character has a “speed” in which they can react to or start their turn or attacks. But you have to wait for that time to happen before you can react. This can make choosing your attacks or abilities quickly vital in certain cases.

Like most RPGs, The Greater Good gives each character their own skills and elemental abilities. Flint wields Light, but can also wield Ice via a gift from a character. You can even outfit him or his party members with others via equipment. In regards to Skills, you need to fill up a “Skill Meter” in order to unleash certain abilities. It’s a decent balance, however, there are issues at times.

Mainly, in some fights, it seems like you’re taking many attacks before you can unleash one, or that their speed is way too high. Furthermore, because of all the abilities that the characters have, it can be tough to try and pick the “right” move without accidentally selecting something wrong, or having to go back because you went to the wrong menu. Because it’s real-time, that means you’re giving your foes a chance to strike again before you can attack once.

The dialogue and conversations are typical RPG affair, but the team made sure to put in as many 4th wall breaks as they could. Such as a password to enter a base being “ThisGameIsGood”, or a character talking about “life before microtransactions”. It’s funny, but it can be a bit eye-rolling at times. 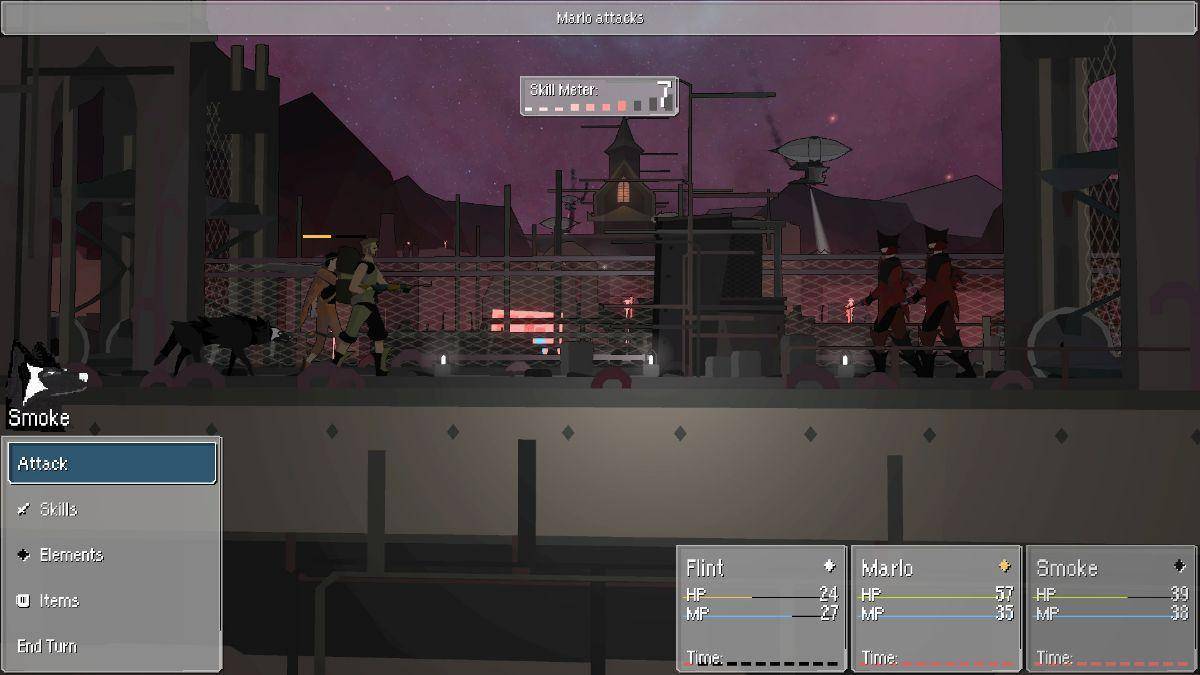 The other main issue with The Greater Good is pacing. The game is about 10 hours long give or take how quick you do some chapters, but while some are “standard” RPG fare in terms of what to do, others don’t feel like they accomplished much. In one chapter, you literally travel across a desert, to a “port”, then to a city. You then talk with a ruler, go to sleep, head to a mountain, and the chapter is over. No boss fights, no major battles outside of the usual stuff.

That’s not to say that The Greater Good is bad, it isn’t. But like many RPGs, it suffers from things that can take it from being a great RPG to a good one.

Case in point, the audio. On one hand, The Greater Good has a very cool soundtrack and use of sound effects to make it stand out from the crowd. But at the same time, the songs repeat really quickly, and can get annoying when you listen to them for too long.

In the end though, The Greater Good is a very unique RPG in its own right, and if you’re hoping for a title to take you back to the days of the old RPGs, then this is one you should get.