The Dead List, a horror anthology release from High Octane pictures out this May, is a rickety roller coaster ride of low-budget terror, that straps the viewer in for high-concept Hollywood nightmare fuel. The twisted minds of writer/director Holden Andrews and his collaborators pay homage to classic horror of the 80’s and 90’s, while upping the fear factor with their own brand of scares. 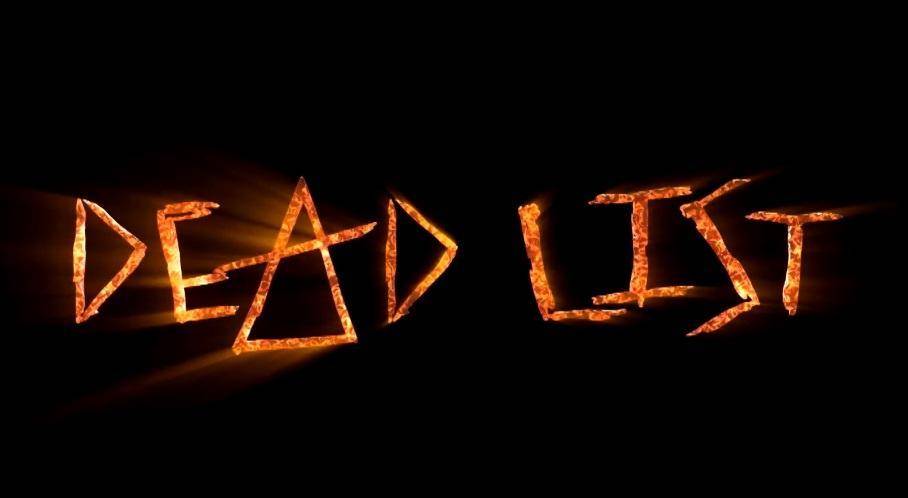 For fans of the Tales From The Darkside or the 1982 George Romero/Steven King collaboration, Creepshow, The Dead List will bring you back to those gleefully gross vignettes while leaving out the stylized comic book motif. A book does play a central role in the plot however, as the names of the film’s ill-fated victims are scrawled onto the pages of The Dead List. 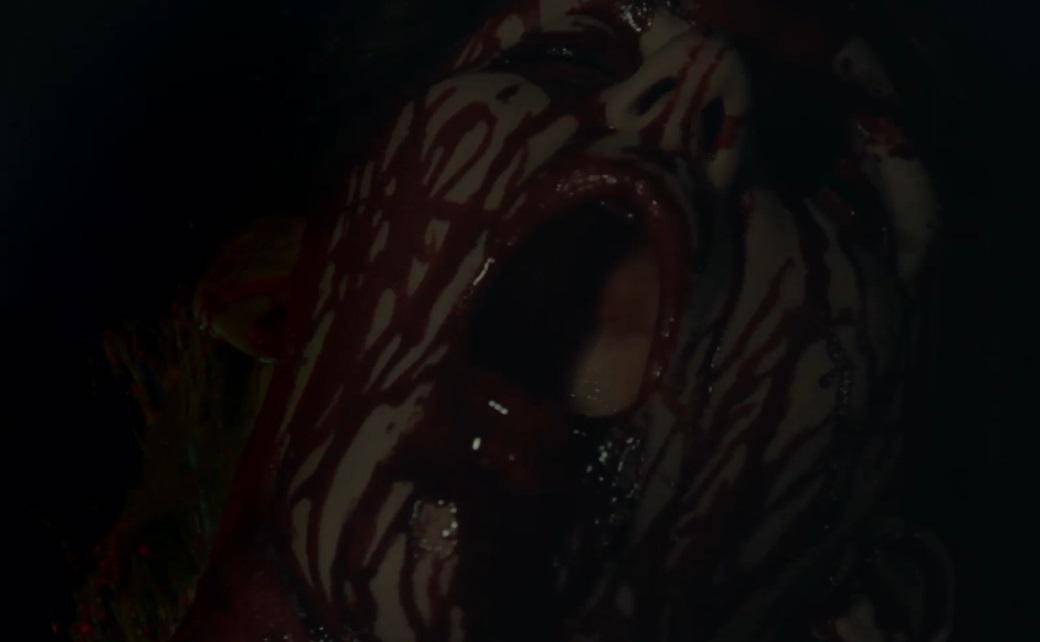 A violent, but unrelated death of a nameless woman by an unseen roaring entity at a community park opens the film and does not bode well for the investment that The Dead List hopes to garner from the audience. If I’m being honest, it looks like a couple of high school kids messing around for a film class project. Luckily the film gets much better with each progressive segment and if I can give away my final review up top, it’s worth the wait for those blood soaked nuggets to come. 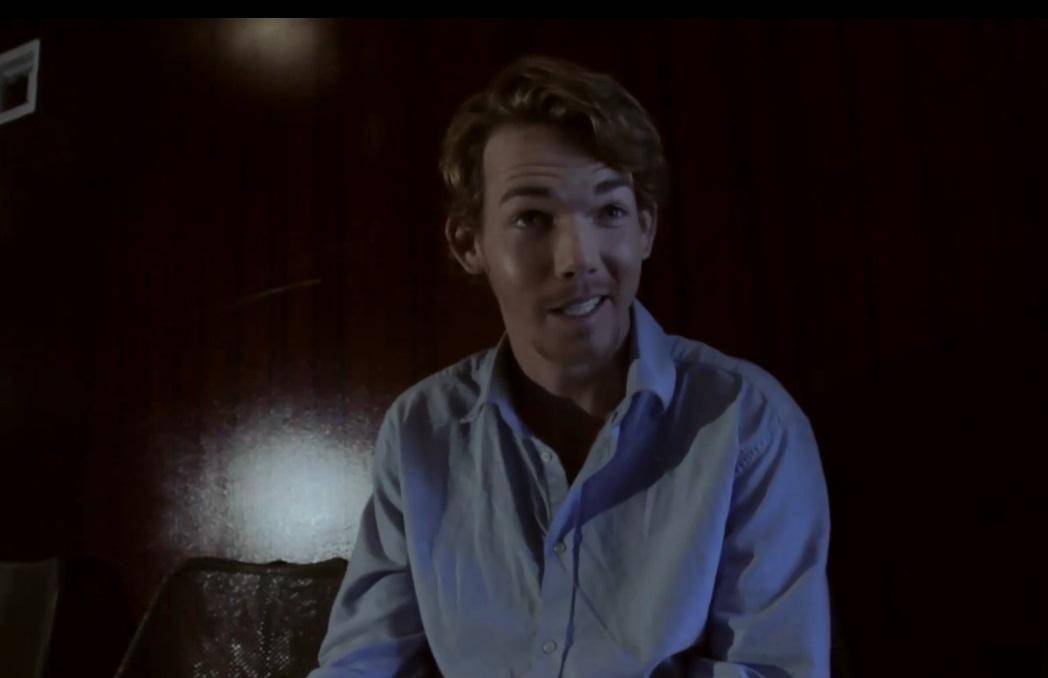 The framework of the story involves a group of young male actors in Los Angeles who meet up at casting calls to commiserate about the roadblocks to their dreams of making it big. The most vocal is Cal, played capably by Deane Sullivan and it is his interaction with The Dead List that serves as our throughline. But let’s be honest, we’re here for the ironic kills and thrills, right? Every time a mysterious glowing triangle mark appears on a character, we know that death is stalking them just around the corner. 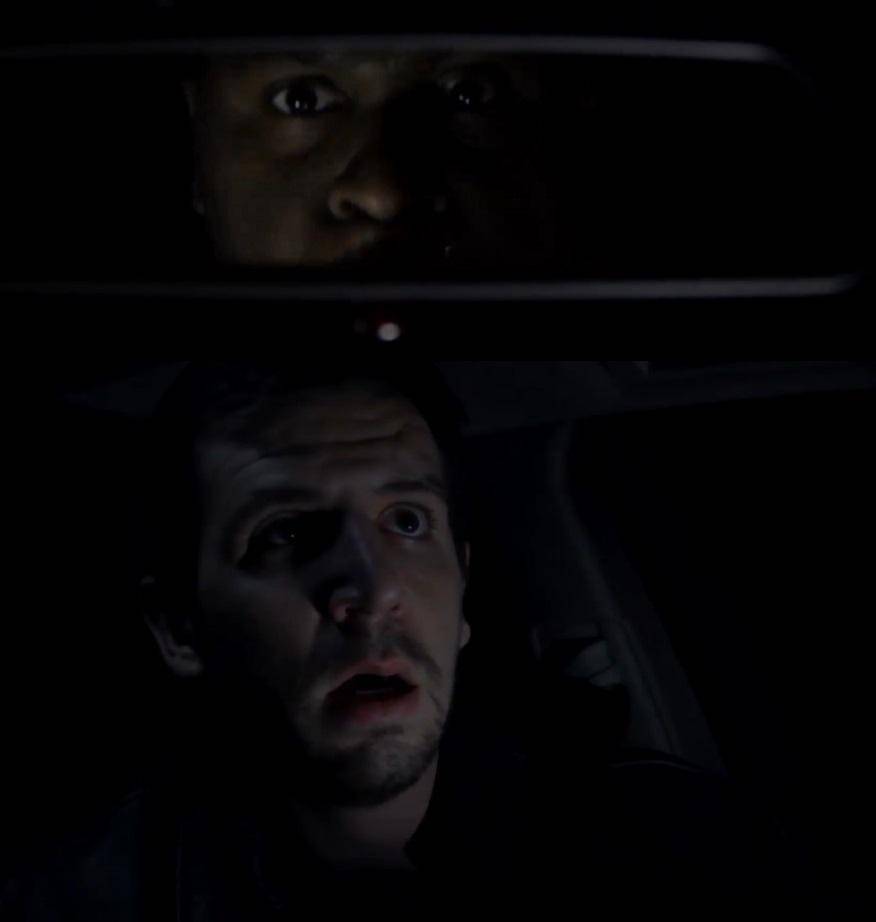 Matt Fowler as Zander is the first to get pencilled in on The Dead List and his segment is a racially charged mindbender that borrows from the themes of Jordan Peele’s Oscar winning Get Out. After hearing a news radio report of an African-American male being pursued by police vehicles, the Z-Man remarks flippitantly that he’s glad he’s not black. So when Zander catches sight of himself in the rearview mirror and an African-American face is staring back at him terror sets in. Especially when trigger happy, white police officers pull him over and have no time for conversation. While lacking the nuanced dialogue of a Jordan Peele script, the piece will still make you think. 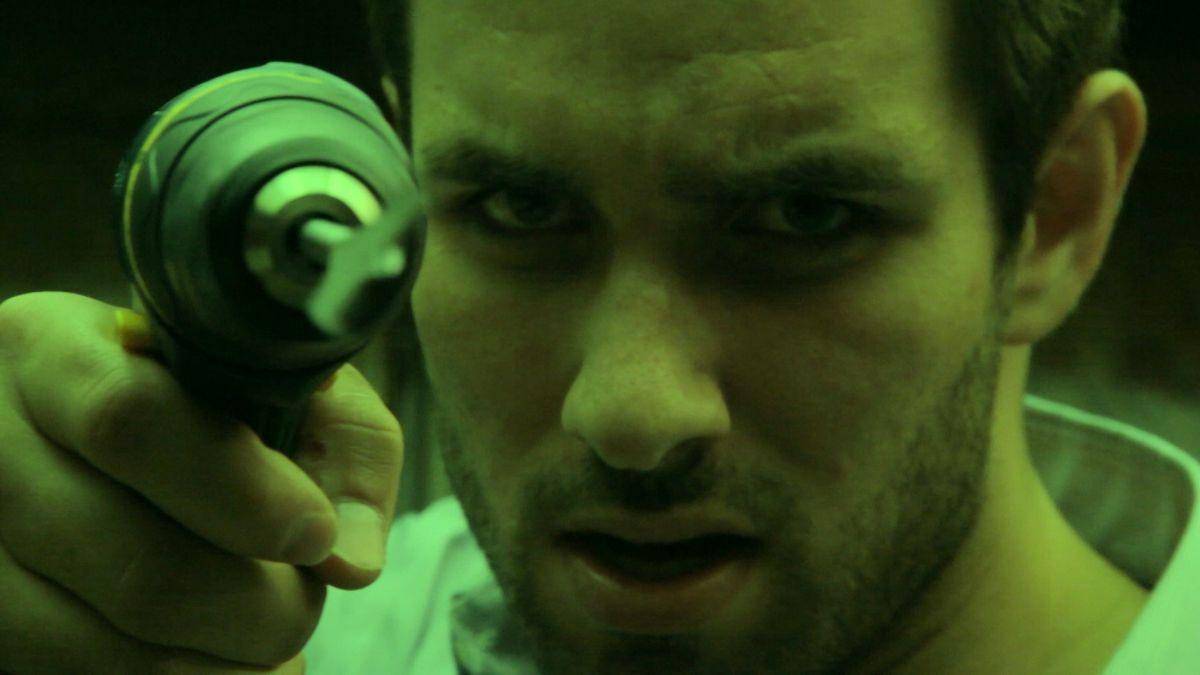 Next up on the chopping block is Scott, a jerky industry brown-noser played by Nick Bandera, who revels in ruining the chances of his competition. After citing his expert networking with executives at New Line Cinema aka “The House That Freddy Built”, the strikingly handsome douchebag finds himself in A Nightmare on Elm Street 5 style time loop with a dash of deadly deafness as suffered by Carlos in Freddy’s Dead: The Final Nightmare. 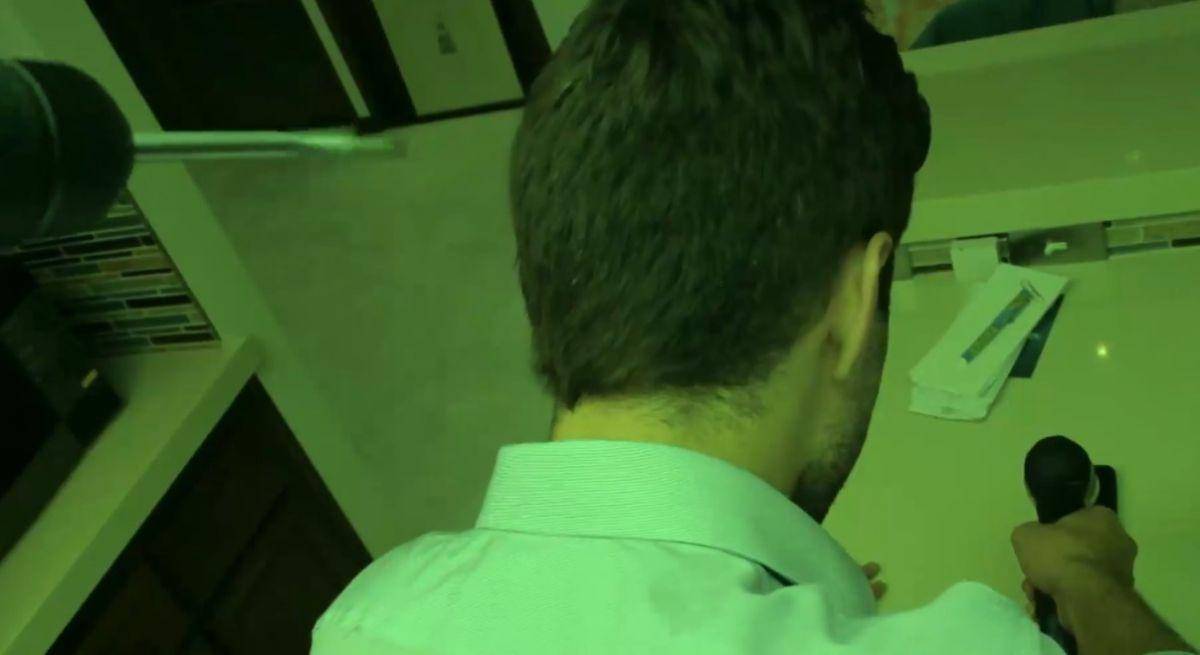 Though this segment is engaging, it’s unclear as to exactly what Scott did to deserve to be terrorized in this particular way or why he ultimately takes an electric drill to his cell phone, but the clever camera tricks are enjoyable nonetheless and his ultimate demise is a suitably bloody affair. 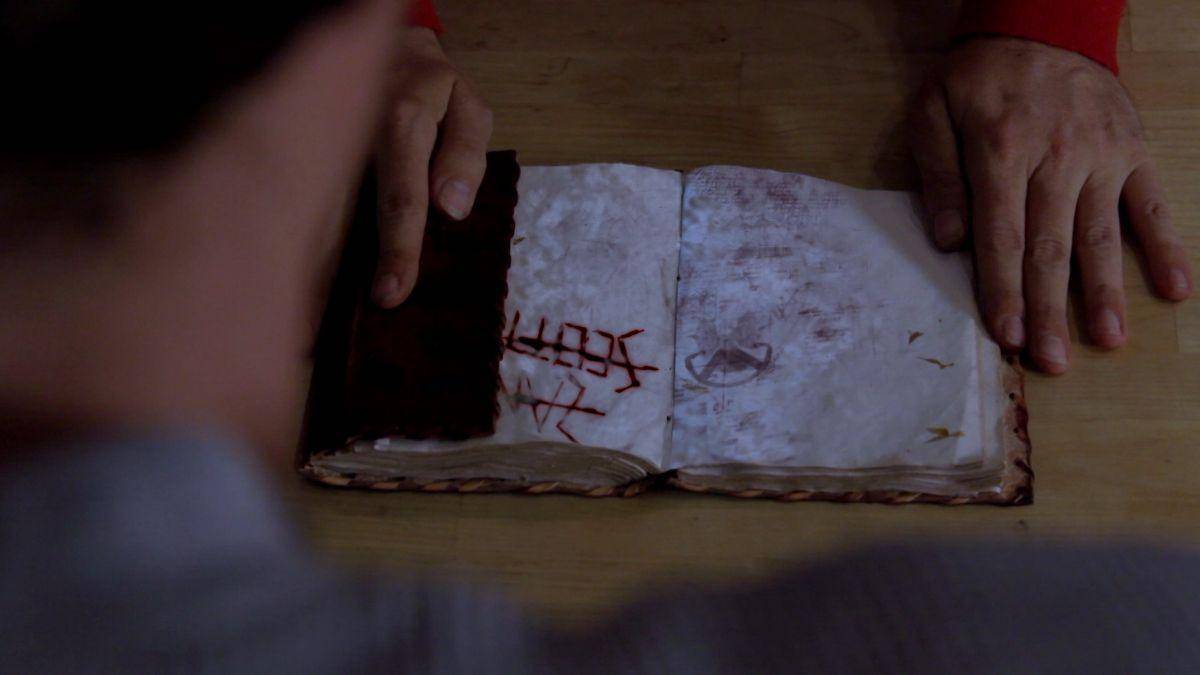 It should be said that while The Dead List appears as an introductory device to each segment, it is unclear why this group of actors is being marked for death by a supernatural force during the majority of the film’s run time. I assume this is meant add layers of mystery, but for the first half of the movie, it was hard to determine if the threat was supernatural or a Hollywood murder tale. 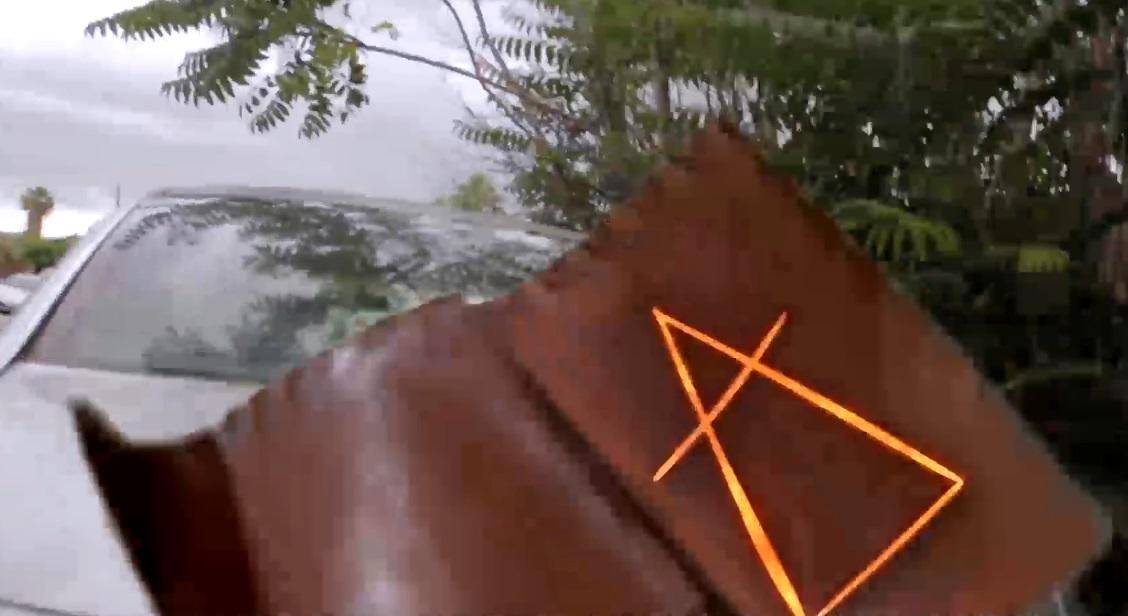 All is laid bare when Cal’s car is attacked by The Dead List book in an obvious homage to the chattering, flying Necronomicon from The Evil Dead films. Soon he finds himself in possession of the text and is later encouraged by his roomate to perform a blood ritual that is meant to increase his chances for stardom. Cal’s connection to the carnage is not one hundred percent clear at first, but the scares are getting so intense, it’s easy to overlook the choppy framing device. 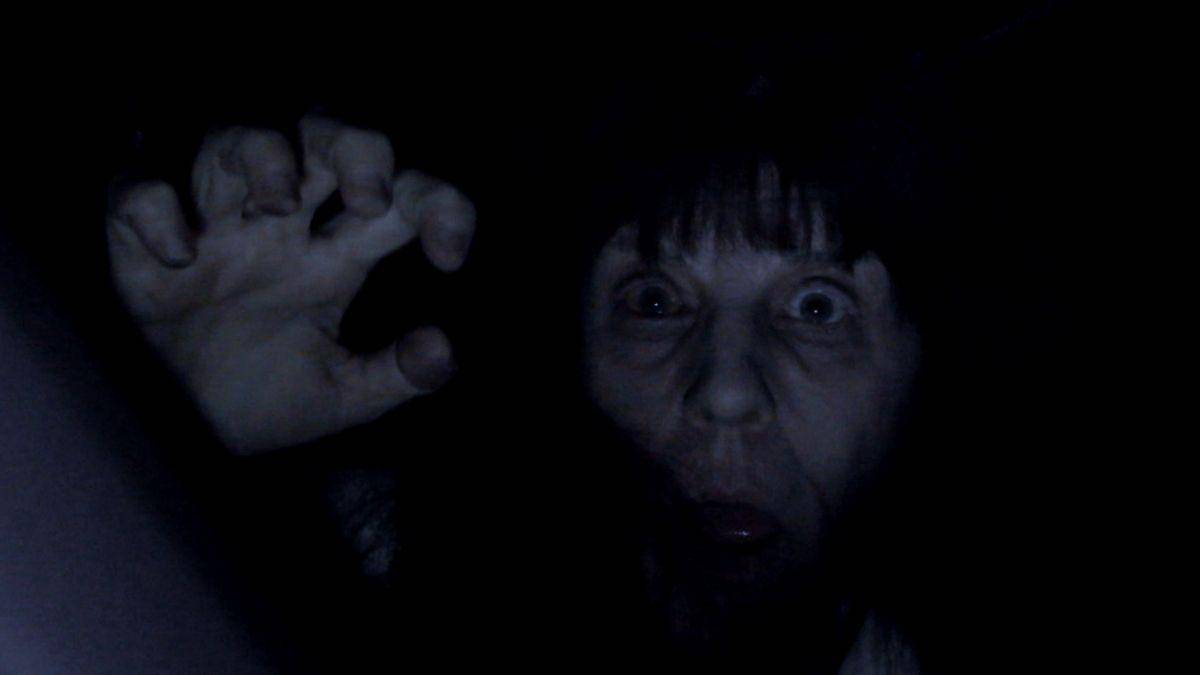 This fright night really ramps up when a heartbroken guy named Jason played by Eric Pierce and his player buddy, Karl (filmmaker Holden Andrews stepping in front of the camera) come upon a mentally disturbed old woman wandering the street in front of their vehicle. The frazzled, pale lady played freakishly by Susan Stangle taps eerily on their windows until Karl inexplicably decides to drive her to their house for the authorities to pick up. Obviously this is a big mistake as horrific hijinks ensue when the witchy woman turns out not to be so spaced out after all. If the eeriness of this tale was what I needed to get me mostly invested in the The Dead List, what happened next put me over the edge.

Stoner-surfer, Kush as played amiably by Rob Healy, had been drifting in and out of the story up to this point, but he has nowhere to run as he meets a titanic terror in the water. Before we get to Kush’s fate however, I have to mention the excitement I felt as a heterosexual male when 2 beach babes played by Lindsey Grubbs and Alexandra Corin Johnson show up to solicit some pot from their beachside dealer. The film had been a real sausage party up to this point and the feminine energy exuded by the pair was a breath of fresh ocean air. It’s a shame that they didn’t get their own turn at fending off the dead list because they had a fun charisma. But back to poor Kush. After toking up and paddling out into the waves, Kush is attacked by what looks to be a mutated stingray. Returning to shore he inspects his bloody leg to find a black tar like substance oozing from the wound. As he frantically drives home, Kush seems to be disintegrating as the black goo covers his entire body causing flesh to slough off his body. Horror fans won’t be able to ignore the similarities to tar-like terror of The Raft from Creepshow 2 with hints of David Cronenberg’s The Fly, but the gore effects are so well done, you’ll be too busy puking to fault the film for being derivative. Ugggh! After the film has blown its bloody wad with body horror, it turns instead to coulrophobia or the fear of clowns. Josh Eichenbaum’s Bob had be derided earlier for taking a job as a kid’s party clown to make ends meet, so it only makes sense that he would blow off steam with cocaine and alcohol, right? Soon the coked-up clown is rubbing paint on his face to evoke not only Heath Ledger’s Joker, but also Sid Haig’s Captain Spaulding from House of 1,000 Corpses. The homage to horror icons doesn’t stop there as Bob is soon being terrorized by a demonic clown who amalgamates Pennywise from IT with Killer Klowns From Outer Space. The harlequin based taunting is a lot of fun with inflatable gags and sinister sentient scarfs pulled out his bag of tricks. But wouldn’t you know it, Bob gets away to finally connect the story back to Cal and the book for a final showdown with Mr. Clown that involves a literal twist ending befitting a film of this type. The Dead List definitely has a sense of humor about itself, embracing the heightened reality that most horror films inhabit. As can be gleaned by the many tributes to classic creepy franchises, it was made with love by fans of the genre looking to deliver entertainment and they do. So don’t judge this book by it’s cover, flip a few pages first and get read for a gory good time. Kylie Jenner release a makeup line that will give you the Freddy Krueger glow. Yes I am not kidding, there is a A nightmare on Elm Street makeup collection! Kylie Jenner became the world’s youngest “self made billionaire” when she launched Kylie cosmetics. This makeup line became popular because of

As the new trailer for Jordan Peele’s remake of Candyman begins, Anthony McCoy tells someone not in the know how this boogeyman works: “If you say his name five times while looking in the mirror, he appears in the reflection and KILLS YOU.” The reply he gets: “Who would do

The boys are back in town: the town of Derry, Maine, plauged by an evil child-chomping clown 27 years ago. They thought they killed him then, but he’s back to terrorize a new generation. The members of the Losers Club have returned to finish him off once and for all!

IDW Publishing announced this week that they’re adapting the Stephen King novel Sleeping Beauties into a ten-issue graphic novel, with illustrations by Alison Sampson. There are a lot of Stephen King books out there. You probably haven’t heard of this one, and neither have I. The official description states “Sleeping