Watching certain films can be torture, but if torture is what you’re after, then The Basement has you covered. This psychological thriller from the writer-director team of Brian M. Conley and Nathan Ives, unleashes a horrifyingly intimate story of abduction and deconstruction of a broken human mind that will make you cringe. Is this film for you? Find out in our The Basement Movie Review.

If naming the film The Basement sounds generic, rest assured that it only serves to lower the expectations of the audience in order to surprise them with an atmosphere of tension that doesn’t let up until the final reveal in the film’s closing moments. But this isn’t a movie about twist endings, it’s about unraveling the motivations of very disturbed individual in a face to face confrontation.

When we’re first introduced to our star/victim, Craig, played by Cayleb Long he is enjoying a romantic evening at home with his wife, Kelly played by Mischa Barton. But a low supply of champagne sends Craig out to the store where he is abducted in the parking lot and becomes audience to deadly one man show in The Basement.

Conley and Ives have a fine eye for shot composition that gives the film a professional look, but when Craig wakes up to find a bi-polar clown performing a kids birthday party routine for his audience of one, I had real reservations about what I was about to devote 90 minutes to. Looking beyond the popularity of IT in theaters last year, the killer clown trope pops up with such frequency in indie horror films, that I was not really looking forward to another take on it. Luckily that segment was merely a footnote to the madness that would ensue. 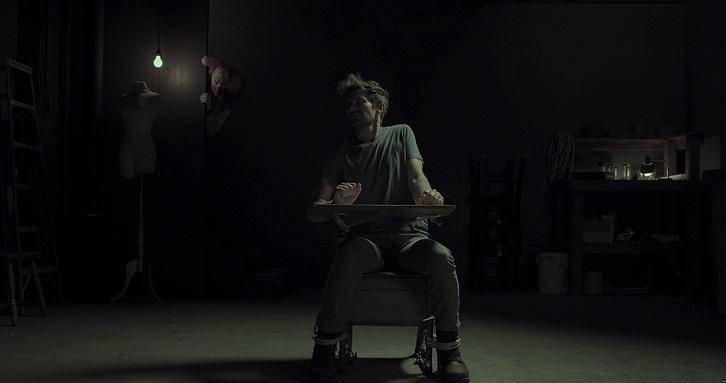 You see, Craig has been tied to a school desk that is bolted to the concrete floor of this subterranean theater where he is front and center for a sadistic and possibly homicidal one man show starring his abductor, Bill, played by Jackson Davis. Each time the kidnapper descends the staircase, he has taken on a new identity and appearance with the intent of playing out a scene that puts the confused Craig in the place of an accused serial killer. 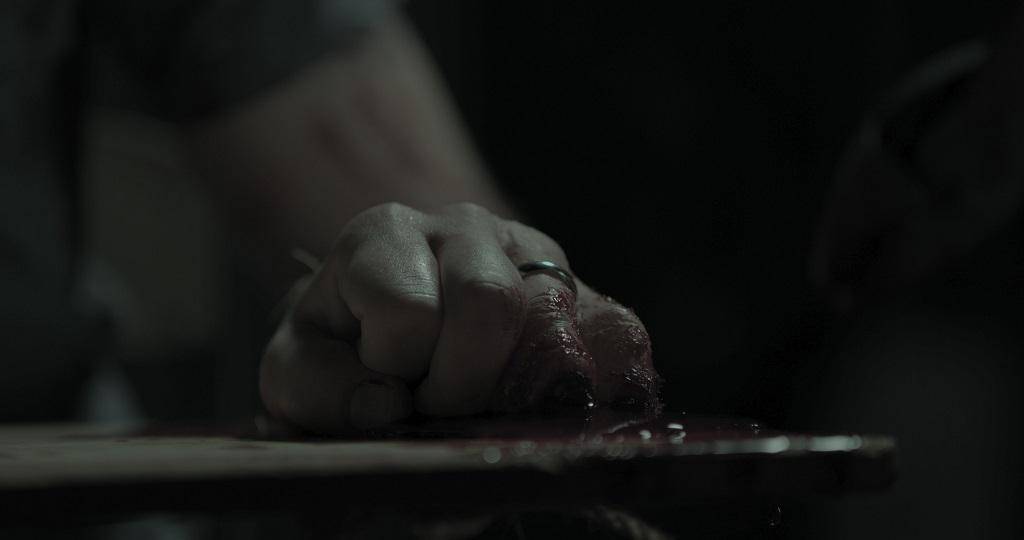 Unfortunately for Craig, some of these personas being inhabited by his captor are more violent than others and in the course of the narrative he finds teeth tortured, appendages severed and less than professional medical procedures being forced upon him. These practical gore effects are quite effective, eliciting a visceral reaction from this reviewer, who had to turn his eyes away at a few moments.

Despite the discomfort I felt as the torture was being inflicted on the captive Craig, I have to admit my own scoffing at some of the medical inaccuracies in certain injuries through which the victim would have surely bled out and died or how often he seemed to regain his composure almost immediately after excruciatingly painful damage to his body. I was also taken a out a few times by a poor camera angle that gives away the trick to one of effects that could have easily been fixed by moving the camera to the opposite side of the actors.

The performance by Davis however is to be commended, as each persona he takes on is distinct in mannerisms and attitude, yet the truth of the scared little boy within trying to make sense of what psychological torture he has endured throughout his life through this reenactment plays out in a linear fashion and the evolution of a serial killer becomes evident.

With the element of a killer taking on multiple personalities at play, one could easily point to M. Night Shyamalan’s recent hit Split and the tour de force performance by Jame McAvoy as the inspiration for The Basement, but the story ends up being more tragic than scary as Craig tries to outwit his captor by empathizing with his torturer by taking on the part of Bill in these violent vignettes being performed around him.

I also want to applaud the sound editing in one scene where Bill, in the guise of a tough as nails detective is trying to force a confession out of Craig for the murder of 7 people and fires off a pistol right next to his ear, proving that the stakes are as deadly as imagined. The silence following the shot and the slow rise of the audio from muffled, tinny sounds to a standard audio track is masterful and was a stand out moment on a technical level.

At this point I should point out what role Mischa Barton has in all of this since her face and name are given top billing on the poster.

Playing the concerned wife for a few short scenes where she tries to investigate her husband’s disappearance, Barton is quickly given her own subplot (that feels like a separate movie) where a female friend she suspects is making time with Craig comes over to comfort her and the two take turns pretending they don’t know the real truth. Although Barton’s character of Kelly does ultimately factor into the film’s resolution, her scenes don’t really add any excitement to the film.

The Basement works best when it slowly doles out the details of Bill’s life which instills in the audience a sense of empathy for the killer who is fond of decapitating his victims with a blowtorch. What feel like audition monologues for a community theater production of the cable prison drama OZ, clearly reveal that though he is inflicting trauma on a seemingly random stranger, Bill is working through personal trauma from which he has not recovered. But just as with Heath Ledger’s Joker in The Dark Knight telling tales of how he got his scars, it’s unclear just how much is fact and what portion is added for dramatic tension.

The Basement made me uncomfortable, sometimes through on-screen torture and sometimes through the feeling that the production was not as clever as it aimed to be. Though I did not properly anticipate the twist ending revealing whether or not Craig’s abduction was simply a tragic case of being in the wrong place at the wrong time, the true motivations and connections between the characters fell flat, despite the surprise.

What can be said for The Basement is that the filmmakers deliver an experience that will keep you guessing as to who’s coming down the stairs next and what their intentions may be. The tension of whether or not the prop in their hand will be used with deadly force ensures that there’s never a dull moment. While not perfect on all fronts, it’s slick look and all-in performances by the two lead actors will win you over.

The Basement will hit select theaters on September 15, the same day it becomes available on VOD from Uncork’d Entertainment.