There are so many Rick and Morty games out there now that they’ve exhausted all possible references to existing episodes. Good thing, then, that five new ones begin airing starting with “The Morty Zone” on November 10. The merchandisers have wasted no time…nine days later, on November 19, a new dice game based on this episode will be available at hobby shops nationwide. 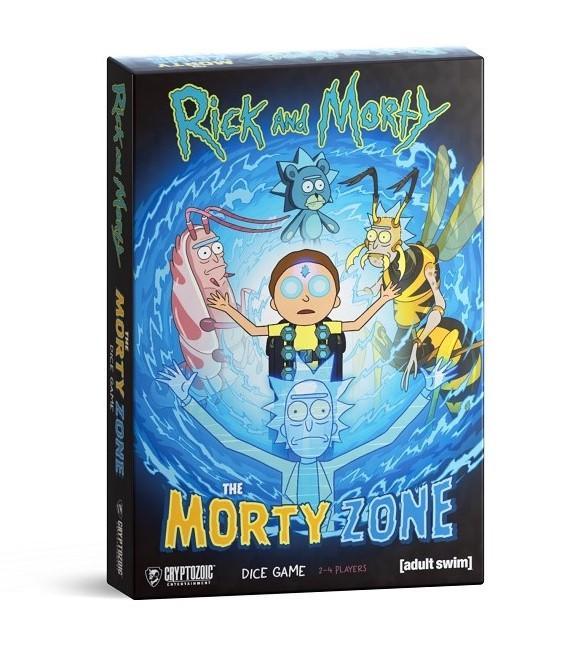 I’d explain the plot, but it would be a spoiler right now. Just accept that there’s a motivation behind all these rules: the active player rolls eight jumbo dice (two each in four different colors) and totals up the numbers on each pair of dice of the same color. Then, using the included dry-erase markers, all players simultaneously check off numbers on their Fate Boards corresponding to the dice totals. Players continue taking turns until they have all settled on their four colors. Each checked number is worth a point, and the player with the most points is the winner.

“Our team has been working closely with our partners at Cartoon Network for over a year to create RICK AND MORTY: THE MORTY ZONE DICE GAME and have it ready in time for the Season Four premiere of the show,” said John Sepenuk, CEO of Cryptozoic. “We embraced the challenge of finishing the game and getting it out to stores while keeping it a total secret. We are extremely excited to reveal the game at last and let fans of Rick and Morty play it even before the airing of the episode that inspired it!”

You can actually buy Rick and Morty: The Morty Zone Dice Game right now; it’s purchasable on the Cryptozoic website. However, by the time the game arrives at your door, it won’t be far off from its retail release, and the episode it’s based on will have aired. No early hints for you.