A team of Franco-Belgian developers who call themselves The Shady Gentlemen are currently working on SteamDolls, a gritty 2D Metroidvania title for consoles and PC. The Kickstarter for the game was launched this week, and has already surpassed its initial goal.

You play as The Whisper: an expert assassin in a grimy, corrupt steampunk city. You know you’re cool because you’ve got the voice of David Hayter, AKA the original Solid Snake (Hayter is not in enough games…remember when Konami replaced him with Keifer Sutherland? That was lame…)

Upgrade your skills through the course of the game and tailor The Whisper to your playing style…a stealthy sneak or a directly confrontational brute. Take down immense, grotesque-looking bosses and get to the center of a vast conspiracy. You’ll mostly be going alone, as is the Metroidvania tradition, but you will have remote help from your girlfriend Valentina, who happens to be a powerful witch. 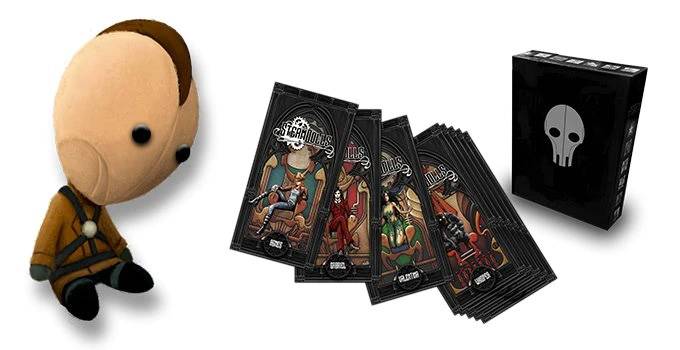 You can pledge today and secure a digital copy of SteamDolls for $23. That price also includes a PDF of the instruction manual, a few wallpapers and your name in the credits. Add some SteamDolls comics and the soundtrack for $34, and beta access for $57. You can also get goodies like a literal SteamDoll of The Whisper, shown above.

Physical copies for PC, Switch or PS4 are offered at the $85 tier, but these are extremely limited with a little over 200 per platform. Right now some are still available, but we would not count on them lasting for long. (Note that the developers have not ruled out the possibility of SteamDolls getting another print run post-release. But the art on this version will be exclusive for backers.)

Get Steamdolls through this link. The campaign runs until July 2; the game is estimated to be completed in May of 2021.