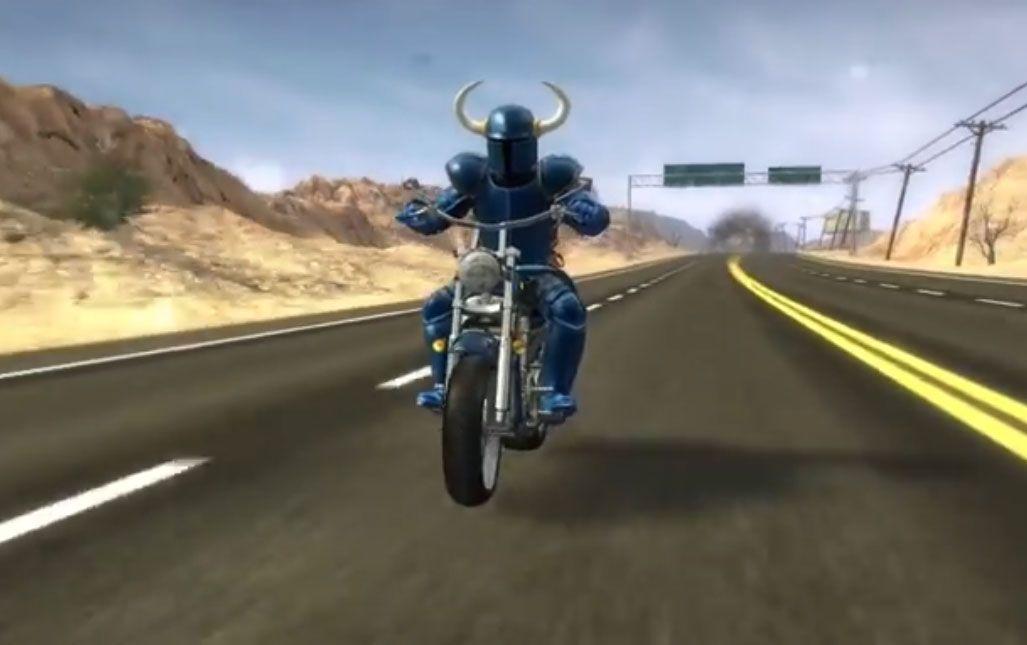 As we look back at the crowded, busy indie game scene of 2014, there’s one title that manages to stand out among the rest: Shovel Knight, an 8-bit throwback that combined the best of the best of 80’s platformers: the skill of Mario, the action of Mega Man, and the pogo moves of DuckTales. It became a Steam sensation and is available on PC, Mac and Linux. The game is also playable on consoles, providing your console is a Wii U (and one really should be yours by now).

Shovel Knight managed to make an appearance in a second game before 2014 ended. That game is Road Redemption, a spiritual successor (meaning not an official successor) to the early-90’s motorbike basher Road Rash. In the trailer above, two skull-masked hooligans commit several death-penalty-worthy acts of violence and it looks like they’ll get away with it. But who’s that coming up fast from behind, wielding a large garden tool gleaming in the sun, and thirsting for vengeance? It’s SHOVEL KNIGHT!

According to Darkseas Games, developers of Road Redemption, the Shovel Knight that exists in the RR universe isn’t the more cheerily dispositioned character from his own 8-bit-styled game, but rather “the Road Redemption version of the Terminator.” It seeks out naughty bikers, locks onto them with its shovel arm and knocks them into the pavement with extreme prejudice. THAT’S ALL IT DOES.

Road Redemption is currently in Early Access state on Steam. When it gets more polished, versions of it will be made available on Linux, Mac, PC, Wii U, PS4 and XBox One. Shovel Knight is expected to be playable in all versions.