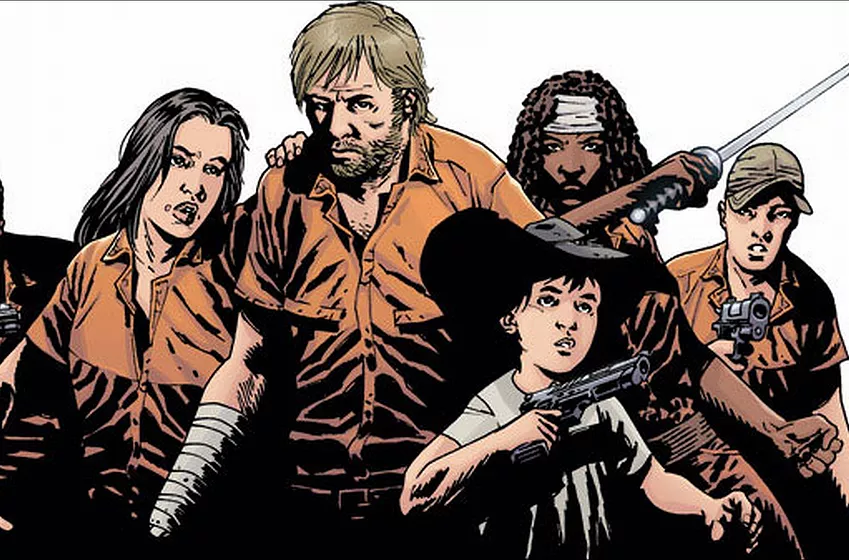 As far as the future of The Walking Dead goes, everything is currently in transition. It’s too early to show a trailer for the next season of TWD, Fear The Walking Dead’s midseason finale is upon us, and the new spinoff in the works is still under construction. So the biggest topic of the day was the surprise ending of the comic book, which creator Robert Kirkman was present to explain.

“I never really hit any point where I thought I was going to have to end it or I needed to end it prematurely,” Kirkman told the audience. “I know that when I hit issue 100, I had this feeling of like, I can’t believe I’m already an issue #100. I have so much more to do! I have so much more story. I’m so excited. I always knew I was going to end the book, but I really did think I would go past issue #300 at a certain point. I know people criticize the book for being repetitious sometimes, because I go on the internet — I’m human, and I scour the internet until I see things that make me sad.”

“But I felt like the story was not repetitious. There was an escalation and something different to every community that they went to and everything that happened because they were learning along the way. But I was acutely aware of how easy it would be to become repetitious. And so that’s the thing that I always wanted to avoid. I didn’t want to get into a place where I was just saying the same thing over and over. I wanted there to be a narrative flow and in order to achieve that you have to have an ending. So I was always in the back of my mind like, wow, how do I wrap this up?”

“When I saw the cover with the carnival, that’s when I was like, Oh, we’re already doing the carnival and the world is getting better. I can’t have the world be getting this much better here and still make it to Issue #300. I need to find out exactly where this end is going to fall. And that’s when I sat down and did a lot of working out. That got me to #193 perfect. I just couldn’t make it to 200!”

Kirkman wrapped up by pointing out that, like a classic zombie, it’s hard to kill The Walking Dead, and it will shamble on for years to come in other forms. “The fact that there was a TV show and a video game and this massive empire built on The Walking Dead would make it impossible for me to wrap up the drama. But I still had the freedom and control to do what I wanted, including wrapping up the comic in secret and not really telling anybody.”

Would Kirkman revisit The Walking Dead in comics someday? He leaves open the possibility. One thing he specifically mentioned is the fact that Negan is alive, out there, and could potentially head his own comic series at some point.

“Negan is alive. I think that’s a cool tidbit. He’s still out there, theoretically living in that farmhouse, so there might be a story to be told there. It’s possible that that’s my escape hatch’ if my career takes a hard nosedive — I’ll just roll out a Negan comic when I’m 42.”

Release Date Set For Bloodstained: Ritual Of The Night

The Invisible Man Stalks This February

Brian Krause Is The Demonologist