Screen Actors Guild Award broke the bamboo ceiling for Squid Game. It is the first time a Korean Television drama got nominated for a SAG. Squid Game became the most-watched show on Netflix last year. It is an unexpected success that got viral through the power of word of mouth.

Hwang Dong-hyuk, The writer and director of this hit show just confirmed that the show is under negotiations for a 3rd season already. It is originally going to be a mini-series but its success is undeniable.

Outstanding Performance  by a Stunt Ensemble:

Squid Game doesn’t have the stunts of Cobra Kai and the Budget of the MCU nominees but the Tug O’War and the glass stone steps have intense stunts that left an impression. 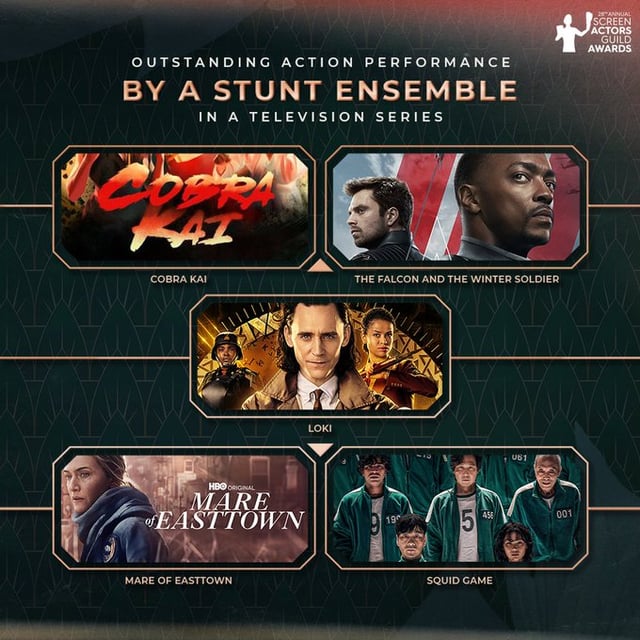 Outstanding Performance by an Ensemble

This situation reminds me of the Victory of Slumdog Millionaire for a similar award. The Squid Game cast has chemistry as an ensemble that even characters with short-lived roles left an impact on the fans. 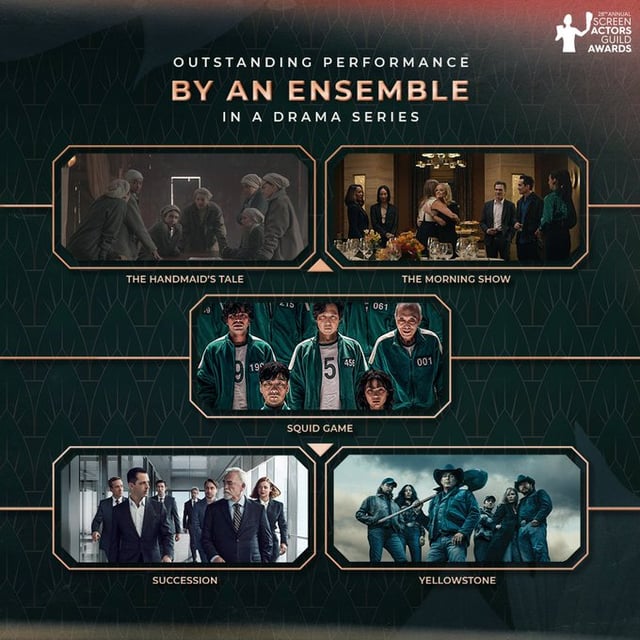 Outstanding performance by an actress

This is Jung Hoyeon’s first acting gig as she is more of a Model and a Reality TV personality. She was a complete unknown to the world before she booked this role. Now she have 23.7m followers on Social media.

Her portrayal of Kang Sae-byeok made her a fan favorite around the world.  She made a heartfelt statement about her nomination at her instagram account.

I was truly taken by surprise that I was nominated. I’m just happy knowing that my photo is going to appear alongside that of Jennifer Aniston, Reese Witherspoon, Elisabeth Moss, and Sarah Snook. Thank you to everyone who voted!

I’m speechless and beyond excited to be nominated. Not just individually but for our entire Squid Game team! I vividly remember the precious moments we shared. Putting in all the hard work to film the intense six rounds of games. On top of the unforgettable memories we share, today’s SAG Awards nominations will be remembered as a precious and touching moment. Thank you so much to the members of SAG-AFTRA. I am so humbled and want to share this moment with all the fans of Squid Game who have faith in justice and love, we as people cherish.

His character Seong Gi-hun is going to return for the second season of the show so more nominations or even victories may come.

Hwang Dong-hyuk is currently negotiating for a 3rd Season of Squid Game!

Hwang Dong-hyuk is about to make more money! Squid Game season 3 is already under negotiations. We don’t even have an announcement for a season 2 yet but we can’t blame Netflix. Netflix finds a gold mine with this show. Local groceries on my town sells Dalgona candies now because

The Silent Sea – A Lunarbase nightmare

The Silent Sea is another supply for the growing need for Korean Dramas on Netflix. South Korean content is becoming more mainstream than ever. The success of shows like Sweet Home, My Name, and Squid Game increase the higher demand for Korean Thrillers. South Korean shows can give something new

Real-Life Squid Game has been a trend among Youtube Influencers but no one made it close to the show as Mr. Beast. Thanks to his Sponsors, Mr. Beast can make a set close to the hit tv show and it is worth $3.5 million to build. They can get 456

Welcome back, Couch Commandos! You know the drill.   We’re here to talk about the latest MCU joint: THE ETERNALS.   Once again, I stand my ground while my co-hosts are less forgiving of this Marvel entry.   Click on in and enjoy! (function() { var qs, js, q, s, d = document,