It’s hard to believe in some ways that the Ace Attorney series has gone through six main titles. As a visual novel series of sorts, you’d think that after a while, the game would get too repetitive, or lose it’s flair. In fact, the creator of the series only intended it to be three games, with it to end after Trials and Tribulations, one of the best games in the series. Yet, Capcom thought there was more room for stories, so more were made. This of course leads us to the newest entry in the series: Spirit of Justice. I’m happy to say that not only does this game live up to its predecessors, it surpasses them in many ways. In fact, Spirit of Justice is my new favorite Ace Attorney game.

No doubt a big thing going into this game was the idea of “how do you top what happened in Dual Destinies?” By that, I mean the concept of the “Dark Age of the Law”, which was a theme throughout nearly every trial. The answer was actually quite surprising, as we traveled to the land of Khura’in, the birthplace of spirit mediums, and a land in deep turmoil. Why? Because their legal system is very one sided, to the point where defense attorneys are considered evil (for reasons I won’t spoil), and new “evidence” seances are considered absolute truths. Because of this, a rebellion is growing, and threatening to take down the current rulers of the land.

So, when Phoenix Wright journeys to this land to reconnect with his friend Maya Fey (making her long awaited return to the series), of course he gets pulled into the mess of things.

From basically the beginning of the game, its clear that Spirit of Justice wanted to go all in on this concept. The first case in this title is easily the longest first case of the series. Which is very significant, as usually the first case goes light on story or length so that new players aren’t overwhelmed immediately. Here though, although they do give all the tutorials necessary, they don’t skimp on the story or the drama. Phoenix has never been in more danger than in these trails in Khura’in, and watching him fight for his client, despite numerous hardships, proves why he’s such a great character. 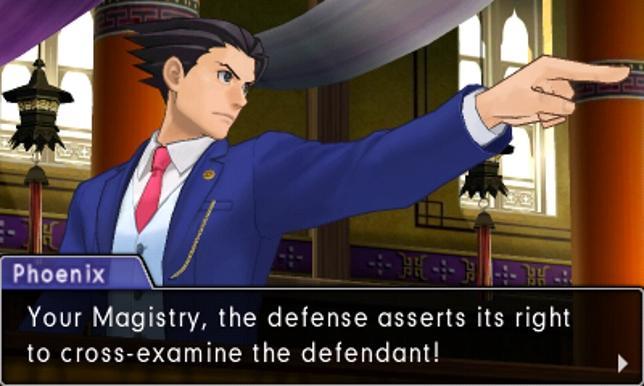 That doesn’t mean there’s nothing going on in the Wright Anything Agency, as both Apollo and Athena are holding down the fort with cases of their own. Unlike in Dual Destinies though, which was very much Athena’s story, this game focuses more on Apollo. As we learn about his past in more depth, as well as how he is tied to the main events of the game. To be honest, Athena does draw the short stick in this situation, however, it does work out because now she can have more room to shine in the next title. As for Apollo, he comes of wonderfully, and has several moments that will make even his harshest critics root for him.

The cases themselves are very powerful in both court and investigations. Just when you think you have something figured out, a twist you never expected shines in, and turns things on its head. While you can guess certain culprits, others will show up out of nowhere and prove these storytellers know how to keep you guessing. In fact, certain twists in the games were so shocking, my jaw literally dropped. One twist in particular left me so stunned I had to put down the game because I couldn’t believe what I was saying, yet I was right.

Now, there is an oddity in these cases. Case 4, which is an Athena “solo” case, isn’t as robust as the others, as there is no investigation aspect, just the trial itself. This will put off some gamers, despite being similar to other “Case 4’s” in Dual Destinies and Trials and Tribulations. However, this trial was very notable for me, as it brought back a favorite character from Dual Destinies, and gave us a “duel” that I wouldn’t have known to ask for beforehand. Furthermore, this trial planted seeds for Athena to grow in the next title should we get it.

I need to stop and make a special note here for the visuals and sounds of this game. Diehard fans know that Ace Attorney was original a 2D game done with sprites. Yet with Dual Destinies, it became a 3D title. However, these models were very simple in look and animation. With Spirit of Justice though, the team went all out. The animations of the characters, both big and small, were masterfully done. Both in look and in intent. For example, in the second case, returning character Ema Skye had to take the stand and testify against a friend of hers. She became very distraught at this idea, and her character model displayed this so beautifully, I honestly teared up. Why? Because I felt so bad for what Ema was going through, and I could see her pain. Many characters have animations like this, and whether they be a young magicians, or a young princess, their emotions are on full display for all to see, it’s great stuff. 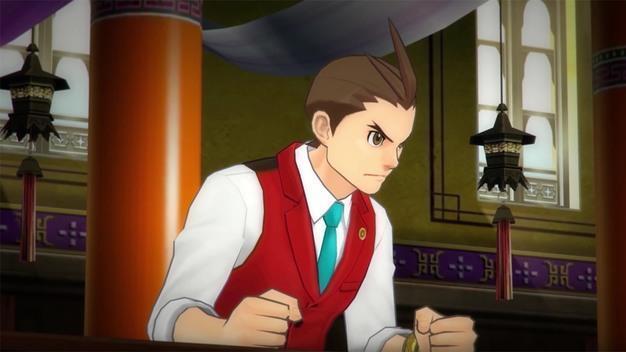 Also though, they have scenes that go beyond what you would expect to happen. In one case, one of our attorneys has a crisis of conscious, and has to be quite literally threatened back to reality. While you might think this is bad, it actually works beautifully visually. As the character who threatens them literally approaches the “camera” to try and snap them out of it. Making it look like we the player are getting the “pep talk” Similarly, another of our trio has a harsh reality brought to them, and their reaction is both tragic and yet totally believable. Making you feel for them all the more.

Add to that, some very beautiful music and sound effects, and you got a beautiful presentation. From the sounds of claps, bells, whistles, skateboards, beads, and more, every sound effect is crisp and detailed. Did they need to do this? No, they honestly didn’t. But by doing so, they made the game an even more memorable experience all around. Sometimes, it’s the little things that make games great. The score itself is near perfect, as it helps sell each scene beautifully, and yet knows when to cut out to let the drama build.

The gameplay plays out like you expect an Ace Attorney game to. You find clues, examine them, talk with numerous people, then question witnesses in trial so you can find the true culprit. The new gameplay aspect, the Divination Seances, will test your thinking powers, while the Psyche-Locks, Perceiving, and Mood Matrix return to add to the fun as well. Yes, there are the usual “gaps” in logic where you think a piece of evidence is perfect, but because the game writers want you to go a certain way, it doesn’t work. These can be frustrating, and sometimes you have to Press the witness at every statement just so you can get a certain one to appear and then work your magic, this will try you at times. However, if you keep your patience (as a lawyer should!), you’ll be able to work out the cases without too many resets.

I won’t say how this game ends, but I will say it delivers a powerful ending, and if you stay through to the end, you’ll get a tease of what may come next. And for those who’ve been playing for a while, it’s the storyline we’ve been waiting for for quite some time.

Phoenix Wright: Ace Attorney – Spirit of Justice shines as few games do. It has beautiful stories, amazing characters, and twists that will keep you on the edge of your seat. If you’re a fan of Ace Attorney, this is a game you must play.

https://www.youtube.com/watch?v=ydBVToeAt8w Luke is the final DLC character in Street Fighter V. He is a blond American MMA fighter who got fans theorizing about his Origins.  He will be following the release of  Street Fighter III character Oro and Rival Schools character Akira.  Most male Street Fighter V is Bulky muscular