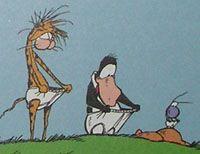 As a super-hardcore, ultra-devoted, boot-licking Bloom County fan “4” life, it’s kind of annoying to me that the most famous strip Berkeley Breathed ever created was something about a cockroach looking into a pair of briefs. There are so many better ones, like the “Snorting Dandelions” strip, or this Bill the Cat strip that I regard as the greatest political cartoon ever drawn for reasons I don’t have space to elaborate on here.

Bloom County contained some of the smartest, sharpest cartooning I’ve ever read, but as IDW’s new single-volume Outland collection proves, that razor wit of Berke’s was starting to dull by the 90’s.

In the summer of 1989 Breathed became the first newspaper cartoonist to quit a successful daily comic strip in favor of the diminished deadline stress of a weekly one. The early Outland strips were very experimental, and I mean VERY experimental. In the beginning all familiar characters from Bloom County have been abandoned and in their place are a purple British otter and an unauthorized ugly-twin bootleg of Mickey Mouse (just roll with it). Opus reappears by strip #5, but he feels very different and out of character at times (odd, as Berke created the bird, right?). There is much more attention paid to detailed Seussian landscapes and inventive panel layouts than there is to dialogue or gags; the art is gorgeous, but characters just talk. They read more like Little Nemo strips that just happen to end in a punchline about a politician or Diane Sawyer. As the strip goes on, it became more grounded and abandoned its fantasy “alternate dimension” setup, gradually turning back into Bloom County — but slowly and painfully. Several members of the Bloom County cast made cameos in 1990 revealing how different their lives had turned out — Steve Dallas had a family now; Binkley had turned into Bart Simpson for some reason. Then a year later they simply reappeared as their original selves with no explanation. Berke clearly missed his old characters but had no idea how to reintroduce them.

I’m just guessing here, because this was the one commentary regarding the strip we truly needed and didn’t get. The author and editor comments in the new Outland book are sparse and not as informative as they should be. Other times, they do nothing but state the obvious. I don’t think enough time has passed that we need an annotation telling us who anchorwoman Deborah Norville is; however, there’s no caption to explain why Opus, Bill and Milquetoast are saluting a photo of Burt Reynolds (which was a commentary on his recent and highly-publicized divorce). Instead, as with the Bloom County commentaries, Berke often uses them to troll his old nemesis Garry Trudeau, which also happens in the strip a lot. A new-to-books strip has Ronald-Ann fearing that “Jane Pauley isn’t a perfect mother and her kids will wind up as nun-stranglers.” WOW. The print quality of these new collections has been spotty; many Bloom County strips were rescanned with the B/W contrast turned up way too high, resulting in formerly pretty inkstrokes coming out blotchy. Thankfully, there’s none of that here, but you may notice an odd moire pattern on some of the colors in the strips. This is because in some cases, they couldn’t locate the originals and….literally scanned in copies from the original Outland collections to fill the gaps. You can tell which ones were included this way by looking for the copyright information — in the new scans it’s kept in; in the old ones it is not.

Many of the newly-scanned strips have been recolored and mistakes are frequent: sometimes you’ll notice Opus’s nose or Bill’s cheeks are plain white in one panel. Stranger still are the times when part of an area is colored in but not all of it; see the skyline in the strip above for an example. How do the proofreaders at IDW miss these kinds of things?

With all that said, you might think I was LET DOWN by this book, right? You’d be wrong.

Maybe it’s all the nostalgia speaking (okay, it definitely is), but as a kid I loved Outland just as much as Bloom County and it was the first strip I turned to every time I read the Sunday Funnies, sprawled out on the carpeting of my mother’s early 90’s apartment. Outland was the first strip to use computer gradients, and I stared at those beautiful color fades in awe. I was obsessive enough to meticulously cut out each panel on the lines and paste them — with RUBBER CEMENT — into a notebook. Unfortunately, I wound up losing this notebook the Sunday this notorious strip appeared:

Forget the underwear strip — this is the most infamous one to me. My mom couldn’t grasp sarcasm very well, and was horrified to see what to her was an open glorification of adultery, objectifying women, and homewrecking. She took me aside, set me on the couch and told me, “This is the devil’s comic.” My jaw dropped at that revelation. Whoa, Berke was working for the devil all this time?? Did he owe him his soul for all the success?

That ban lasted one week. The following strip was a light Ronald-Ann spot with an environmental theme and Mom forgot what she was so mad about. Then she never read Outland again, which was fortunate for me, as it’s the crudest strip of Berke’s three. Bloom County focused on satire and clever twists on world events, but a lot of Outland punchlines are just about butts or belching or testosterone. Like I said, the wit was dulling.

But at least Opus, Bill, Binkley, Oliver and Steve Dallas were all there, having new adventures, albeit shorter and sometimes more nonsensical. I was simply happy to have my favorite cartoonist still working in some fashion. When Outland ended in March of 1995, I thought it had to be a joke at first. For months I read the funnies staring at Outland’s old space like a poor dog abandoned by the curb, hoping against hope Opus would show up again and say “Just kidding!” Then Calvin and Hobbes left and the comics kicked me when I was down.

Years later, I was halfway through college and had long abandoned hope of seeing him when suddenly….Opus came back. But that’s a tale best reserved for the review of a later book.