We’ve all been there: You’ve got the urge to play your favorite tabletop roleplaying game. You want the thrill of telling a great story, tossing some dice, and making instant memories. The only problem: your gaming group’s on hiatus, or you’re travelling for a work trip, or – in today’s pandemic world of self-isolation – you’re not able to meet with friends. The only option before was to simply pine over our lost hobby and dream if the good ol’ days. But now, there’s hope: A light that shines at the end of this proverbial tunnel: The Radiance Adventure Engine.

Mike Howlett of Oddfish Games has created the ultimate ttrpg solution to the lonely-player’ blues: A gaming system that You can use by yourself for ANY game in ANY system. In the Radiance Adventure Engine, you are both the Player and the Game Master, and the story belongs completely to you and the system of your choice. Radiance is not a combat simulator; there’s no rules for any ttrpg outcomes. Instead, a series of Detail cards and Story setups allow you create an on-the-fly experience in moments. 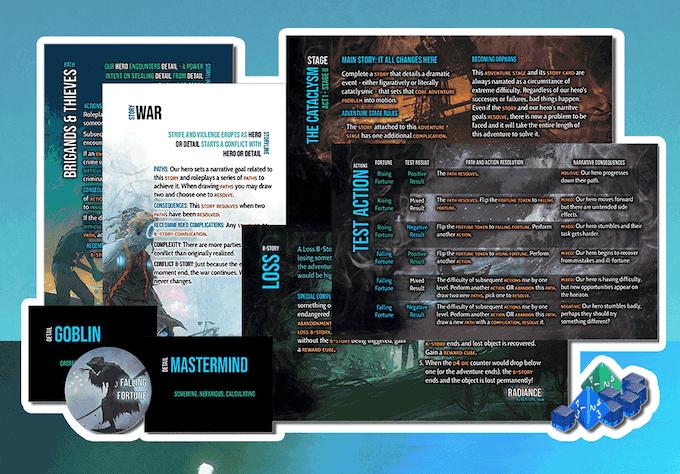 Every story begins with YOU– you choose your favorite ttrpg, create a character Hero the way you like, and set up using The Radiance Adventure Engine’s unique cards. First, a story-prompt card details the Core Adventure Problem, which fuels the entire adventure. This problem is the ultimate goal of the adventure that fuels your Hero’s struggle. A Single word Detail, with its own unique set of challenges, plot hooks, and adversaries awaits. Will your tale begin with “Betrayal”, or have you been sent on an “Exploration” mission? Are you the “Savior” of a lost people, or a “Defender” of the final outpost of the star system? The Detail is open-ended and can be adjudicated by your system and your character, so no two games are ever the same.

In a structure that follows the typical 4-Act structure of such media as novels, film, and television, you will reveal additional Story beats fueled by prompts on similar cards, as well as Detail cards that will fill the story’s people, places, and goals. Each Act has a set of problems that arise from the Paths within it, a series of choices that you, the lone player, make and interpret to create the story and explore the world. 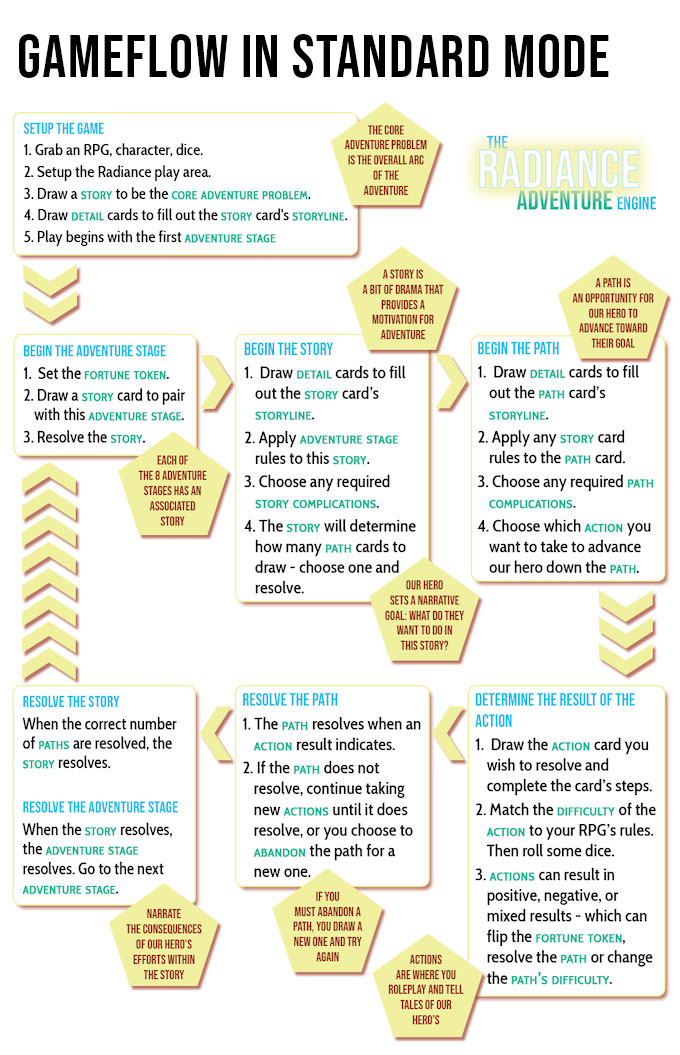 The entirety of The Radiance Adventure Engine comes across as an exercise in improv, story-placement, and word association. The Details can be creatively placed into any type of story you choose. A “Mummy” Detail might be an actual mummy in a Savage Worlds game set in the Weird West, but it could easily be an old, dying ruler in your D&D game. The “Ornament” Detail might serve as a MacGuffin in one game, your beautiful sidekick in another, or your home and spaceship in another. The possibilities are only held back by your creativity.

As a rules-empty template and supplement for your favorite system, The Radiance Adventure Engine allows you to solve problems according to the game you’re playing. If you must resolve your “Last Stand” Path with your “Enemy” Detail, you can simply have your character 1-v-1 battle the troll in your Pathfinder Second Edition game or dramatically tell off your rival in the Pasion de las Pasiones episode you’re telling. Again, the system is uniquely open-ended to create any kind of encounter in any game of your choice.

The Story you tell here can be a stand-alone One-shot, a mini campaign (fleshed out in it’s “Campaign Mode”), or a GM tool to create story hooks for your players when you do return to the gaming table. Another great feature that The Radiance Adventure Engine reserves is the option to NOT use it with a game – to simply invoke it’s story prompts in Write Mode, which is a great exercise in fiction- or screen-writing. These optional ways to play really open up Radiance’s utility, making it a great addition to any ttrpg game space or writer’s room.

The Radiance Adventure Engine not only gleams in it’s design, but in its artwork as well. Each card has evocative, cinematic scenes with a surreal-yet-informative look. The colors and impression of the product are immersive and help kindle your imagination as you play.

The Radiance Adventure Engine has been thoroughly playtested with over 2 dozen different systems, including games from both Modiphius and Pinnacle Entertainment Group (which both feature into the Kickstarter with a list of available titles you can receive as part of your Pledge, a feature that alone is worth the price of admission here) to bring a new or favorite game to your table alongside Radiance.

With a unique and open-ended structure and a creative way for you to play your favorite tabletop roleplaying game by yourself, The Radiance Adventure Engine is a must for any player, Game Master, or Writer looking to flesh out their creativity and stories. With a bevy of different ways to reuse the Details and Story cards, Radiance will shine long past the gloom of the lone-player blues and will serve as the final detail you’ve been looking for to take your skills to the next level.

The Radiance Adventure Engine is currently fully funded on Kickstarter and has unlocked several Stretch Goals at the time of this review.