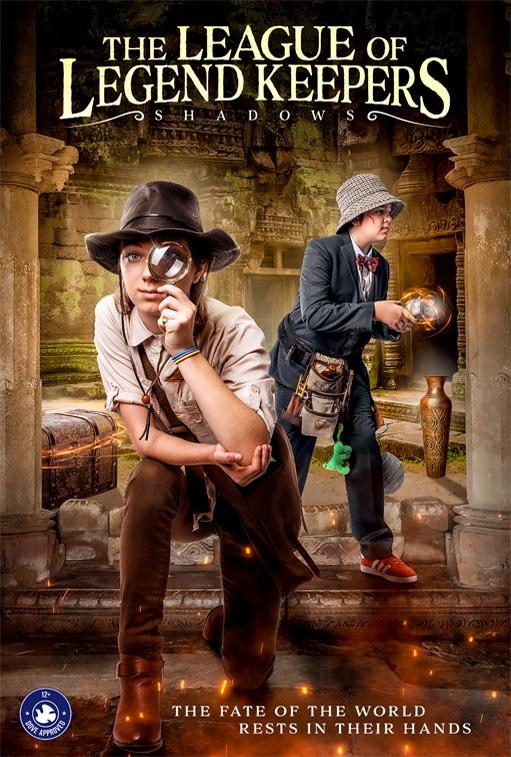 The impending release of League Of Legend Keepers: Shadows wasn’t announced very long ago, but distributor Uncork’d has a couple more bits of promotion they didn’t send out originally. The first is this poster:

Note the small “Shadows” subtitle, implying they’d like to make more than one of these. Guess that depends on the public reception. The second thing Uncork’d released today is this advance clip from the film. See what you think (but keep in mind it’s targeted at children):

There’s a new girl in town…Sophie, who lives with a family of archaeologists. They haven’t moved here just for peace and quiet….quite the opposite. They’re beyond just any ordinary family, they’re the League Of Legend Keepers! They’ve spent the last few years tracking down ancient pendants that bestow fearsome power, and the fifth and final pendant is believed to be buried somewhere beneath the city.

Everyone will be in deep trouble if they can’t get it, or if villainous forces obtain it first. Good thing Sophie has made quick friends of the other kids in town, and they’re all willing to help in classic wacky family adventure film fashion.

Sophie is played by young actress Isabella Blake-Thomas (“Once Upon A Time”), and despite her age, she actually co-wrote the script for this one. League Of Legend Keepers: Shadows also stars Richard Tyson (“Kindergarten Cop”), Jake Brennan (“The Orville”), Britt Flatmo (“Super 8”), Marcelo Tubert (“G.I Joe : Retaliation”), and Abigail Titmuss (“Days of Our Lives”). It was directed by Isabella’s mother, Elizabeth Blake-Thomas.

Uncork’d usually brings us indie horror fare, but they dabble in other genres on occasion. League Of Legend Keepers: Shadows is one of their “family” releases, and it’s coming to DVD and digital December 10.