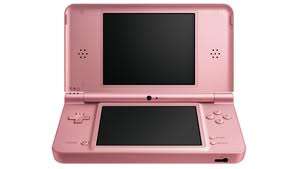 In a move which will surely convince the FPS obsessed masses into picking up a DS, Nintendo have announced another ghastly colour for the poor DSi XL. (Note: Sarcasm was used in the previous statement!) Hit the jump for more…

This fall, Nintendo has a shiny new option for consumers seeking a hand-held entertainment device that matches their personal sense of style. On Sept. 18, the range of hardware colors for the portable Nintendo DSi XL™ system grows to include Metallic Rose, an eye-catching shade of pink with a luminous modern sheen. For kids eager to head back to school in style or busy adults with an appetite for on-the-go entertainment, this new color option rolls fun and fashion into one irresistible package.

A strong roster of upcoming games for the Nintendo DS family of systems – including new installments in several fan-favorite franchises – will keep new and existing users’ spirits extra rosy this fall and beyond. Kirby™ Mass Attack, which launches Sept. 19, lets players control as many as 10 pink Kirby characters at a time using unique touch-screen controls as they defeat enemies and collect medals in a variety of colorful worlds. Players gather fruit to build up their mob of Kirbys, and this is key because a certain number of Kirbys are needed to access different stages and areas. Remember, more Kirbys equal more power. The combination of Kirby Mass Attack and the new Metallic Rose Nintendo DSi XL make for the “perfect pink pair” for that favorite girl gamer. Also, Professor Layton and the Last Specter™ will invite players to solve loads of brain-teasing puzzles in order to solve a captivating new mystery when it launches on Oct. 17.

Banner Saga 2 Made Massive Changes Due To Player Feedback

GTA V: our summary of the Game Informer reveal