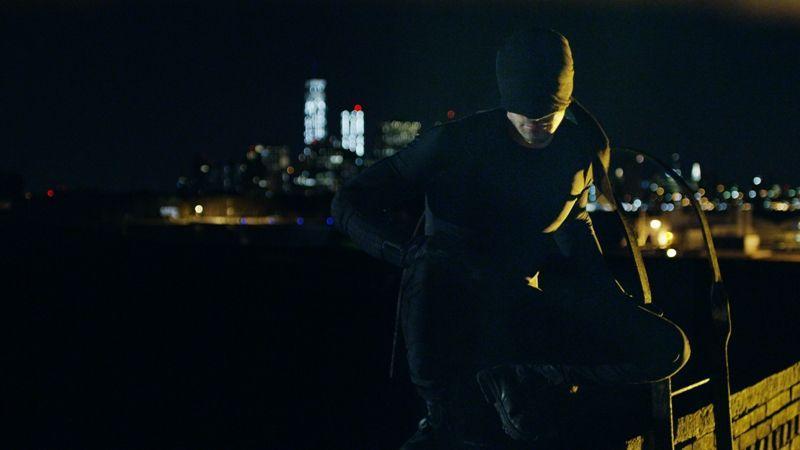 Later this week, Marvel Studios and Netflix will launch the first of several Marvel Cinematic Universe TV shows in Daredevil. The series is a long time coming since the 2003 disappointment of the original Daredevil movie from 20th Century Fox, which starred Ben Affleck. Many years have passed, and the rights for the character fell back to Marvel Entertainment. Fox dragged its feet on a follow-up for many years, and as Marvel’s multimedia empire expanded, it made sense to convert Daredevil into a TV series in a post-Avengers movie age. Considering that Daredevil is centered around a lawyer who fights injustice as a trial lawyer in the courtroom by day and as a masked vigilante at night, an episodic TV format seemed to be an apt way to go for the material. After following the production of the show, I had reservations, yet was optimistic, that Marvel was handling the latest live-action incarnation of Daredevil the right way. The casting decisions all came off as strong, inspired choices. When I heard that Stick would actually appear in the show, played by Scott Glenn, I was even more encouraged by the direction the show was going. Not to mention, Steven DeKnight coming in as the showrunner and executive producer for the series. His work on Spartacus was fantastic, and that was probably one of my favorite shows of the last decade.

Daredevil is without a doubt the greatest TV series Marvel has ever produced. It is quite possibly one of the greatest pieces of live-action entertainment the studio has ever made, period. It is also probably the darkest and edgiest material Marvel has ever produced. With the Netflix TV format, Daredevil gets to go far past the typical limits you might see in your average Captain America, Thor or Iron Man sequel. It is appropriate considering the dark routes and paths the Daredevil stories often explore. Daredevil is firmly set in the main Marvel Cinematic Universe. The plot builds off of a world post the Chitauri invasion depicted in the first Avengers movie. Blind lawyer Matt Murdock (Charlie Cox) and his law partner Franklin “Foggy” Nelson are fresh out of law school and are setting up shop in their hometown of Hell’s Kitchen, New York. In the first episode, they pick up the case of a traumatized Karen Page. Page is accused of murdering her boss, but Matt Murdock possesses special gifts and he can tell she is innocent. Of course, the show recounts Matt’s accident in his youth, where he is blinded by toxic chemicals. However, Matt’s other senses become enhanced, granting him incredible abilities. In his adulthood, Matt opts to use his gifts to fight back, as a masked vigilante against the criminal underbelly of the city. However, all the crime of Hell’s Kitchen is controlled by a singular force. By mentioning his name, you are marked for death. That man is Wilson Fisk (Vincent D’Onofrio). He is better known to fans as The Kingpin. Essentially, DeKnight and Marvel have set up the first season to be Daredevil: Year One. It is an origin story; but more time and development can be meted out in 13 episodes than in the typical Chapter One/Origin story film. The first five episodes establish Murdock and Foggy setting up their law practice, bringing in Karen Page and the criminal stables that are infecting Hell’s Kitchen. Murdock, in his efforts is trying to protect the unfortunate and innocent, and with his best intentions, seems to cause as much chaos as he tries to prevent. The later episodes of the first five further develop the parallel crusade of Wilson Fisk, a man who is convinced his cause is an altruistic one to rebuild Hell’s Kitchen.

So far, the performances in the series have been top notch. Cox brings a compelling confidence as Matt Murdock. Whenever he enters the room, he exudes an excellent command over the area. Despite his blindness, Matt overtly shows that he will not allow anyone to pull one over on him. Cox exhibits a centered presence and focus, likely because of the sensory overload that is going on inside his head, due to all the noises he can hear and scents he can detect. The show does an excellent job of establishing and showing off Daredevil’s abilities, proving that he is not your common, everyday vigilante. Vincent D’Onofrio’s performance as Wilson Fisk is simply outstanding and brings a ton of subtle pathos to the character. One can sense a whole history and upbringing for Fisk. He comes off as a wounded and wild animal, and also as an abused and bullied child. When he does unleash that animal, it is primal, vicious and monstrous.

The action and stunts on the show are hard, rough and tumble. Matt Murdock might have impressive abilities, but he can still be hurt or injured. That damages takes its toll on him in later confrontations. The second episode features one of the show’s more impressive fight sequences. As Daredevil searches a gangster hideout for a kidnapped child, the camera stays entirely in the hallway. Daredevil is already gravely injured, so he is fighting by the skin of his teeth and almost on his knees. It is an exhilarating sequence. The directors opt to keep all the action in the frame and avoid massive, rapid-past cutting.

After viewing the first five episodes, the worst part entails waiting to view the rest of the season. Since the first season will be available in full at launch that means viewers can binge watch the series in one day. The show very much plays in that format. Each of the first five episodes tends to have a standalone plot, but the events tend to bleed over and continue into the very next episode. In a typical procedural drama, a certain amount of time tends to pass between each episode. In Daredevil, the next episode seems to take place the following day, or only hours later. Based on this sampling of episodes for the first season of Daredevil, I cannot wait to see the rest. I am especially awaiting the creation of the actual Daredevil persona and costume, which is hinted at in the show’s opening. The show features an excellent opening credit sequence, which is becoming a lost art as of late. The opening features a sonar look over the city while a blood-like paint substance envelopes various imagery, including what resembles the classic silhouette of Daredevil. I look forward to what Marvel and Netflix have planned for next. Bring on Iron Fist.