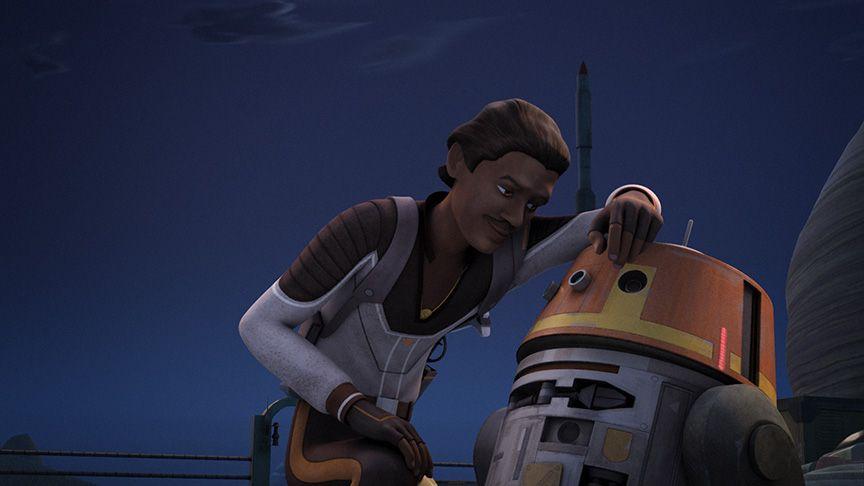 Another classic Star Wars Trilogy character is set to appear in the next upcoming episode of Star Wars Rebels. “Idiot’s Array” sees the return of Lando Calrissian to the franchise, voiced by his original actor Billy Dee Williams. Disney XD has provided Popgeeks with some new images and a behind-the-scenes featurette for the episode, featuring the return of Williams as Lando, which are available below.

In the new episode, Zeb loses the Ghost’s droid Chopper in a game of cards to Lando Calrissian. The crew of the Ghost agrees to help Lando with a dangerous smuggling heist in order to not lose Chopper for good. Unfortunately, the scheme of the smooth-talking scoundrel involves Lando plotting to trade Hera for secret cargo. Needless to say, the Ghost crew gets more than they bargained for with Lando.

So far, a number of classic Star Wars characters have appeared throughout the first season of Rebels. In the series premiere, Darth Vader had a special cameo voiced by the one and only James Earl Jones. Later on, both R2D2 and C-3PO appeared as guest stars, with Anthony Daniels returning to voice C-3PO. With Lando Calrissian returning, and 2015 being the year of the release of Star Wars: Episode VII – The Force Awakens, one wonders if the big guest appearances for Star Wars Rebels will continue. Luke Skywalker actor Mark Hamill previously voiced the ghost of Darth Bane in Star Wars: The Clone Wars animated series. Perhaps Hamill could reprise his role as Skywalker and at some point encounter the Ghost crew. However, that would require a jaunt to Tattooine. So far, most of the action in Rebels has stayed either in space or in the vicinity of planet Lothal.