The world premiere trailer for KOF XV has been revealed!
Also announced was the latest character joining the SAMURAI SHODOWN Season Pass 3! #SNK#KOF#KOF15#SamSho

Snk playmore releases the trailer of the King of Fighters XV. It follows the tradition of 2d gameplay of most KOF games but uses stylized 2d animated graphics.
The graphics reminds of the last Samurai Shodown game with it’s highly detailed anime aesthetic. The game is produced by Yasuke Oda and it is directed by Eisuke Ogura. Both of them left a message to the fans at the end of trailer. They told the fans to wait for next week because the first gameplay footage will be released for fans to see. 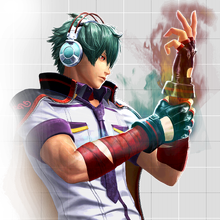 The trailer reveals some the first playable characters on the initial roster but it is not yet confirms who will be their official team mates. The characters revealed by far are Kyo Kusanagi, Benimaru Nikaido, Leona Heidern and the Voluptuous Mai Shiranui. King of Fighters series was originally a crossover game of most SNK games. Lately it evolved into its own entity with new characters now outnumbering the legendary SNK characters. I do hope to see more legacy characters from different SNK games over original characters.

The first trailer reveals that the original and former protagonist Kyo Kusanagi is teaming up again with Benimaru Nikaido. The story of this game will continue where King of Fighters XIV left off.

King Of Fighters XV will be coming out this year but it might be a very long wait. While waiting for the latest game in the series. KOF releases King of Fighters XIV ultimate edition. It is a complete edition of the game where all DLC characters are now available together with the alternate skins as well.

A remaster of King of Fighters 2002 Unlimited match is also coming this year. It will delight for the fans who misses the 2d sprites era of this series.