Jim Henson: The First Star I Ever Spoke To

With the upcoming debut of The Muppets on ABC, I find myself thinking of the very first brush with fame I ever had. Other members of my family had them. My brother was heard in a radio news report on the Macy’s Thanksgiving Day Parade, and when my Mom was a child in the 50s, she made an on-camera appearance on a local kids’ show in New York City. My first encounter with fame came in 1990.

As I’ve mentioned in several of my previous articles, I don’t really have fond memories of the 90s. While most people in my age bracket look back at the decade and think of it as a wonderful time to be a child, I look back and I see a decade where I had severe behavioral issues, lost my dad to a heart attack when I was 12,  lost my mind to bullying a year-and-a-half later and landed in a mental hospital, was diagnosed with Aspergers’ Syndrome, went to three different schools in three years and saw my relationship with my Mom start fracturing, eventually leading to a complete decay in the 00s.

The 90s actually started out rather promisingly, though, and one of my only happy memories of the decade came in 1990. Our family had started going to Walt Disney World in the late 80s, and we would eventually be among the early investors in the Disney Vacation Club. In 1990, though, we were staying at the Contemporary, memorable for its’ distinct A-frame that the Monorail runs through en route to the Magic Kingdom, which was where I met a real life icon.

I loved the Muppets as a child. I would watch Sesame Street and reruns of The Muppet Show, and among the first movies I can recall watching were Sesame Street Presents: Follow That Bird and The Muppets Take Manhattan. I knew at a young age that Jim Henson was the creator of the Muppets and the voice of Kermit The Frog and so many others. On the other hand, when I was a child, I thought Mickey Mouse was real and not a fictional character, which led to extensive bullying throughout the 90s, but that’s a story for another day.

I knew Jim Henson was Kermit because he frequently appeared alongside the character, and both of them were acknowledged in these interviews and appearances. This all leads to our family’s 1990 trip to Walt Disney World. I was riding the Mad Tea Party with my brother and my dad, and when we got off the ride, my mom said that she saw Jim Henson sitting on a bench. This was when he was filming the 1990 special The Muppets At Walt Disney World. We walked up to his bodyguards and asked if we could meet him. They asked Jim, and he agreed.

We sat down and I said to him, “You’re Kermit The Frog”. He said, “Yes, and I can do the voice of that Fabulous Frog right now!”. We talked for a little bit, and then we had our picture taken with him. He had sunglasses on, but he decided to remove them for the picture, saying he would want people to recognize him. That picture is the header for this article. I’m the one in the Nintendo shirt on the right, Jim is in the center, and my brother is on the left. 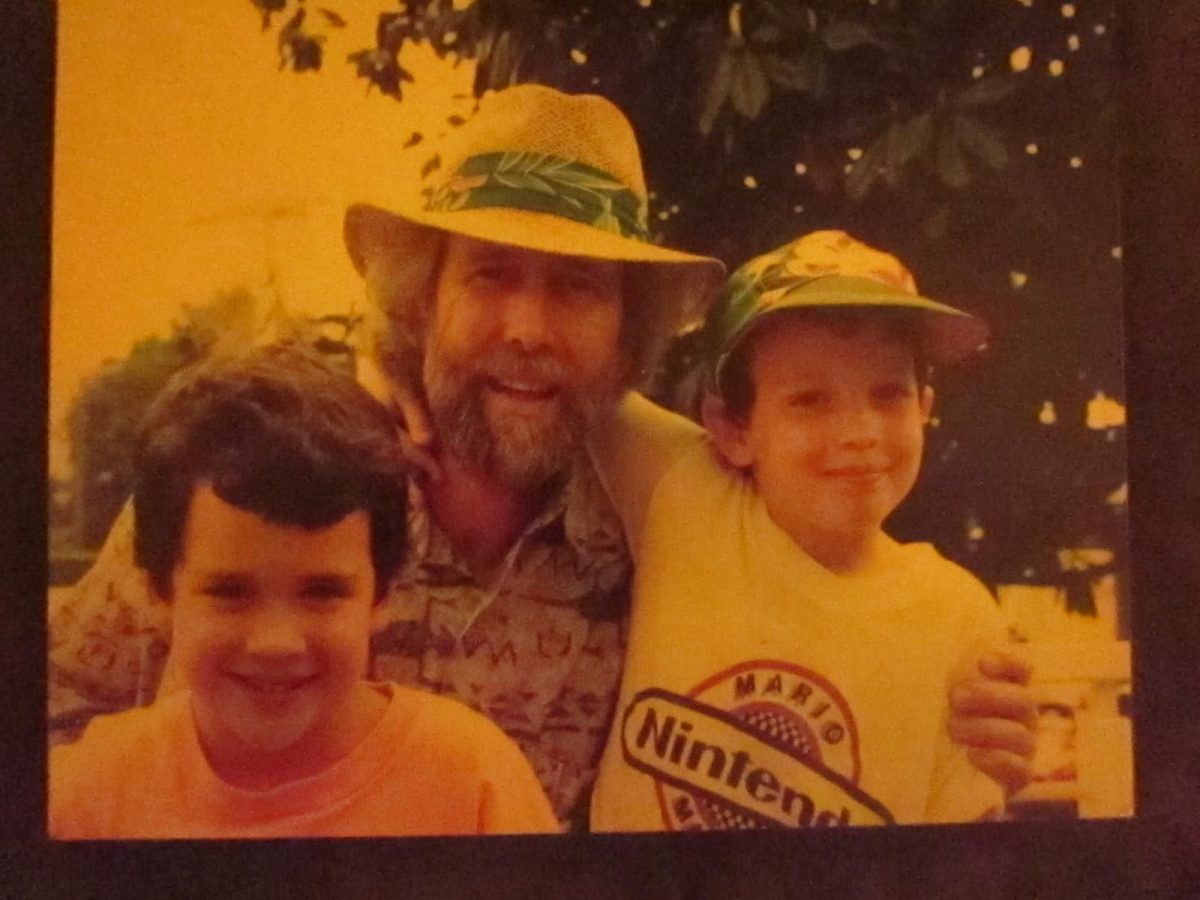 We said a few last words and we left him to resume work on his special. It was an amazing honor to meet him, and a great shock when he died about a month-and-a-half after our vacation. The Muppets have had a rocky road since Jim’s passing, with the rights bouncing from company to company after Disney’s initial purchase attempt fell apart in the wake of Henson’s death. They’ve been with Disney for a little over a decade now, and some have said that after the failure of Muppets Most Wanted, the upcoming Muppets show on ABC may be their last chance to garner acclaim again.

When I think of Jim Henson, I think of how his work with the Muppets, as well as his work on projects like The Dark Crystal, Labyrinth and The Storyteller, was for both children and grown-ups. The difference between the projects when Jim was alive and those after he died was that the projects when he was alive were effortless in their reach to all audiences. Based on the trailer for the ABC Muppets series, it looks like they’re trying too hard to recapture that feeling, whether it’s through Kermit dubbing his love life “a bacon-wrapped Hell” or through the part about Fozzie Bear’s interspecies dating. That was good for a plot line in The Great Muppet Caper or a one-liner in The Muppets Take Manhattan, but I don’t know how funny those types of gags will be week after week.

Getting back to Jim Henson himself, he was the very first star I ever met. My passion for pop culture in all its’ forms (movies, music, TV, books) has kept me going through some very rough times, and I’ve become friends with quite a few of these entertainers as an adult. At the end of The Muppet Movie, Kermit sings the lyrics “Life’s like a movie. Write your own ending. Keep believing. Keep pretending”. Those words stuck with me as a kid, and although my life isn’t over yet, I’ve continued writing my own story. Jim Henson was the first star who inspired me, and although I’m not as hardcore a Muppet fan as those who can be found on websites like Muppet Central, he has continued to inspire me over the years. If he were still alive, I would have loved to interview him and tell him how big an inspiration he was to me.

It’s been 25 years since I met Jim Henson, and it’s been 25 years since his passing, but I’ll always remember him. He was, and still is, a great man. Even with his weaknesses (gambling, overspending, women), he had an amazing outlook on life, and the lessons he shared in his work can still inspire us to this day.