Imagine the 1993 Bill Murray movie Groundhog Day was set in a gore splattered Haunted Hospital Halloween Maze and you have Inoperable, a frightening February release from Zorya Films and ITN. This time-bending horror adventure by writer/director Christopher Lawrence Chapman has some interesting ideas and the star power of horror icon, Danielle Harris in front of the camera, but does it deliver the scares? Let’s enter the operating room and begin our invasive procedure on this freaky flick. 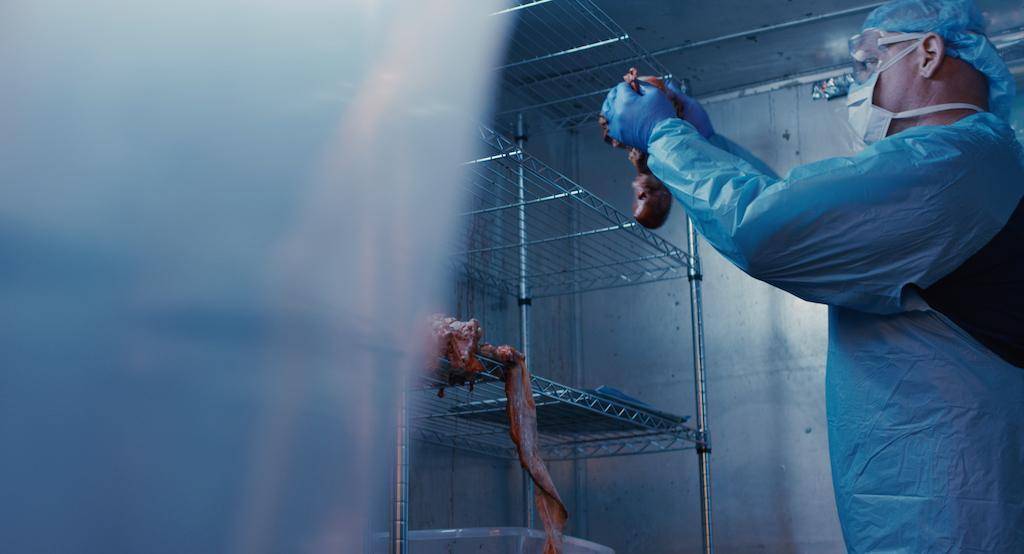 Most people feel uneasy in hospitals to begin with, maybe it has to do with facing our own mortality or the promise of enough jello-o and creamed corn to choke a camel that sets us on edge. Either way, it’s no ones preferred vacation spot. So the choice to set a horror film in a building where intense bodily harm and disease are prerequisites for entry makes total sense.

Now consider how you would feel if you could never leave this horrible house of healing and around every corner lurked psychcotic staff members ready to pounce on you with implements of dissection. Add to that the presence of severely disturbed and deformed patients roaming the halls and you start to realize why Danielle Harris’ character of Amy Barrett is so confused by her predicament.

Here’s the plot in a nutshell: While stuck in traffic during an impending hurricane off the coast of Florida, Amy suddenly blacks out and wakes up in the bed of a mostly evacuated hospital. After wandering the halls and witnessing some frightening imagery, she blacks out again, waking up in her car and suddenly the cycle repeats itself. With each return to the hospital bringing more scares and questions than the last, can Amy figure out how to break the terrifying time loop before she winds up in the morgue?

It’s certainly an interesting premise to start a movie with, but what the viewer has to determine is if the constant repetition of setting and short cast list presented by director, Chapman pays off. In that case, it depends on what you are coming to the movie for. If you want a supernatural mystery with a sci-fi twist, you’ll get a solid helping of that X-Files flavor. If you want gore galore, there’s plenty of bloody forced surgeries to make you uneasy. If you want convincing performances by the actors, that make you feel connected to the story, well…

I like most people know Danielle Harris from her breakout performance as Jamie Lloyd in the 4th and 5th entries of the Halloween franchise, as well as her great fortune of surviving an attack by Michael Myers again in Rob Zombie’s re-imagining of the seminal slasher franchise and it’s less successful follow-up. Heck, I even enjoyed Harris as the foul-mouthed tomboy Melissa in Don’t Tell Mom The Babysitter’s Dead with Christina Applegate. She’s a veteran of the horror genre and obviously the strongest performer in this ensemble, but even an MVP can’t win the game all by themselves.

Harris’ co-stars Jeff Denton and Katie Keene are nice to look at, but can’t quite carry the weight the script requires. You see each time Amy returns to the derelict hospital she runs into Jen and Ryan, characters who at different points in the timeline are portrayed as either gung-ho adventurers looking to escape the facility or unwilling patients mentally disturbed by the trauma inflicted on them by the sadistic doctors and orderlies.

These roles have the potential to be a tour de force performance for two versatile actors, with each of these transitions requiring a total shift in performance. Unfortunately the duo seem only able to pull of the flirty interplay of their opening scene convincingly with the rest of Denton’s time on screen playing like a poor homage to Brad Pitt’s character in Terry Gilliam’s time-travel twister, 12 Monkeys and Keene just not able to get that blank look off her face, despite the forced sobs of her vocal performance.

Why am I harping on the acting so much? It’s just a horror movie you say? Yes, but even the silliest of slashers like Cheerleader Camp or the Sleepaway Camp sequels (I guess I’m scared of the great outdoors) has a cast that brings charisma to it and Inoperable is unfortunately sterile in its presentation. For example, Danielle Harris witnesses brain surgeries, disembowlings and shock therapy as she wanders the hospital corridors, but rarely does she have an emotional response to these stomach-churning sights.

The film plays like a bad dream that her subconscious is merely observing, with Amy more concerned with working to solve the puzzle of how this time loop was created than freaking out about the obvious malpractice on display. It’s as if the horror elements were tacked on to bring in the genre audience, but the director would have preferred to be making Timecop 3 (yes, there was a non-Van Damme sequel).

Most annoying to me were the 5 hospital staff members who are constantly chasing or abducting our protagonists. At no point is there even a question as to the motivations for their homicidal tendencies. They’re constantly breaking into a menacing T-1000 style brisk walk or popping out of doorways to grab a new victim with no provocation. It really does feel like someone saw a blood splattered surgical team at a haunted house maze and decided to hire those actors to re-create the experience on film.

Playing to it’s Twilight Zone inspired roots, Inoperable does have a twist ending that in some ways could explain away my criticisms above, but it’s still a frustrating watch up to that point, even with that final reveal.

So after cutting through all the viscera, what is there to like about Inoperable? As stated, the time-travel component gets you hooked at the beginning and you can count on Danielle Harris to bring a smile to your face more than once with little quips that show some personality. Plus, it’s got sickeningly squeamish thrills mixed into sadistic surgical scenarios that you won’t forget if you need some decent gore effects to get you through the run time.

But despite the interesting hook of the premise and those few moments where the film seems to pulling through, it ultimately dies on the operating table. There’s just no sense of personality to compensate for the overlit settings and unconvincing performances from most of the cast. Sci-Fi fans won’t get a satisfying pay-off for the time travel and horror fans won’t get enough well-executed scares, so what you end up with is a case of slight unease throughout. Since there is no nudity and limited language to be found, Inoperable might make a good training wheels introduction to the horror genre.

Inoperable is available now on DVD, Cable VOD and Digital HD from Zorya Films and ITN.