No matter how you come to this movie, House of Salem is not what you’re expecting. This British indie suspense film from writer/director James Crow will surprise you with it’s narrative choices, while taking some turns you didn’t see coming. The question is, do you like surprises? Read on to learn more about this fright feature available now from Wild Eye Releasing. 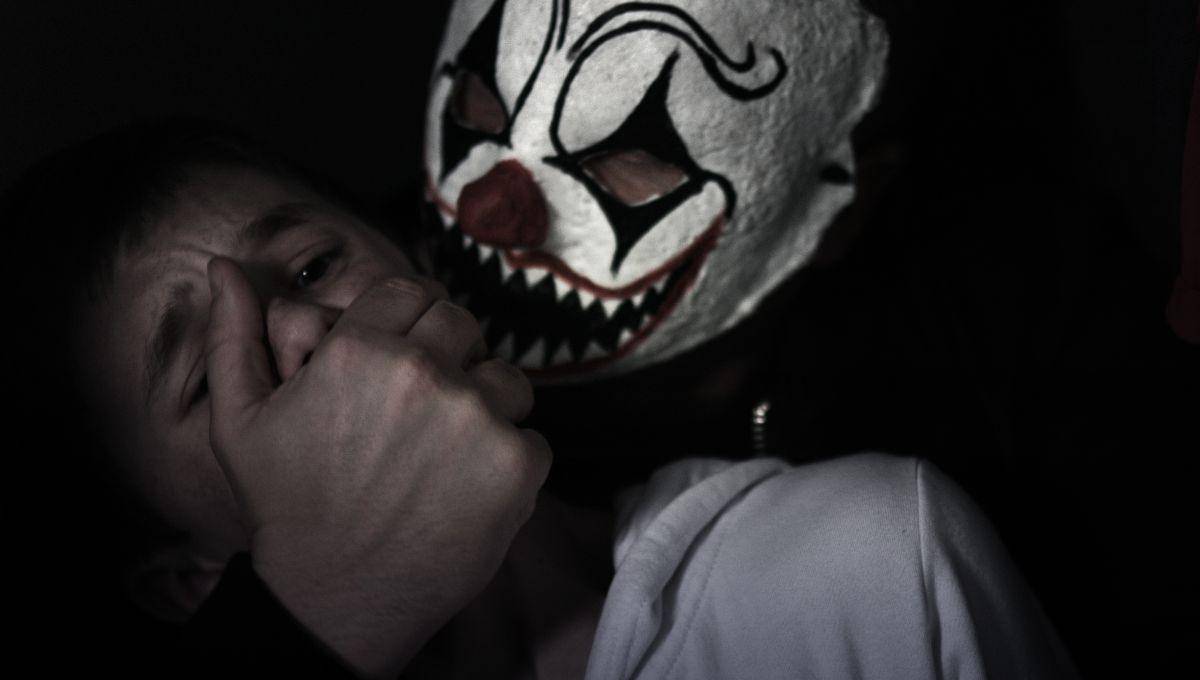 When I first read the title House of Salem, I immediately imagined a Lords of Salem meets House of 1,000 Corpses style crossover plot featuring soon to be murdered victims screaming their way through a labyrinth of terror. My assumed Rob Zombie connection was reinforced by the fact that the first frame of footage I laid eyes on featured a killer clown with someone in its clutches and we all know how the former White Zombie frontman man loves his scary clowns. 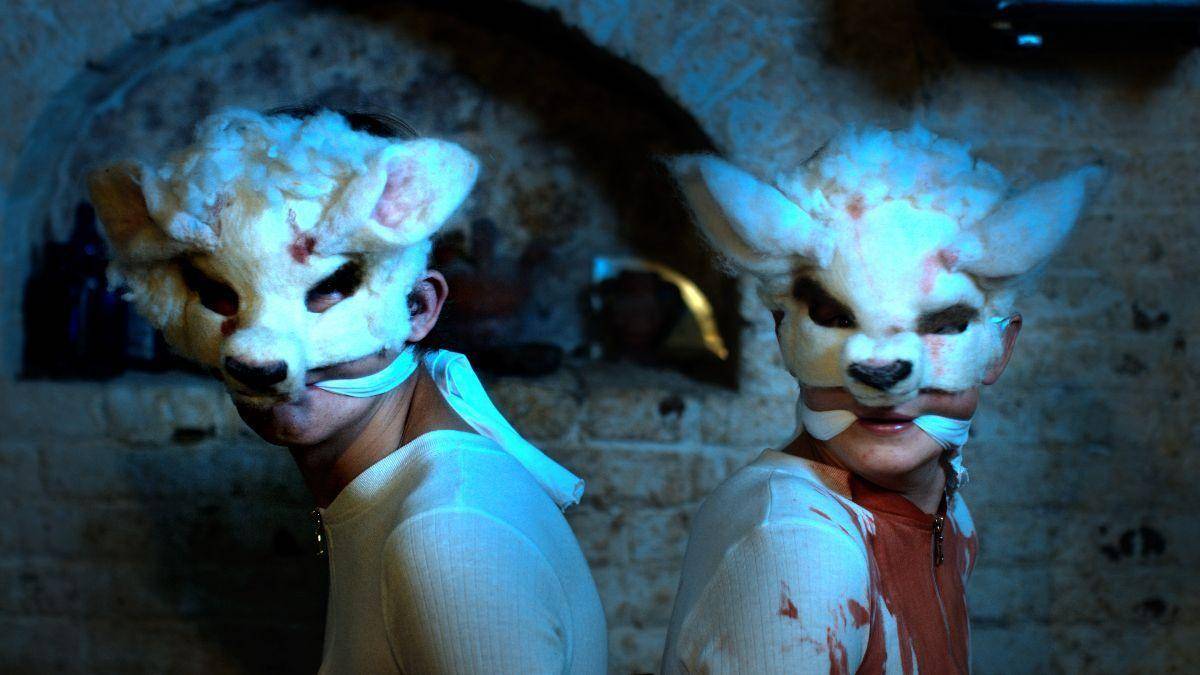 Once the film’s opening credits began to roll, however, flashing images of young boys clad in sheep masks and blood soaked long johns, a different picture began to form in my mind. You see, House of Salem couldn’t be further from the balls to the wall, fully American homicidal hillbilly horror of Rob Zombie. Instead it sticks to its English roots and tells a story that is much more reserved, slowly building terror and suspense as a devious mystery unfolds. 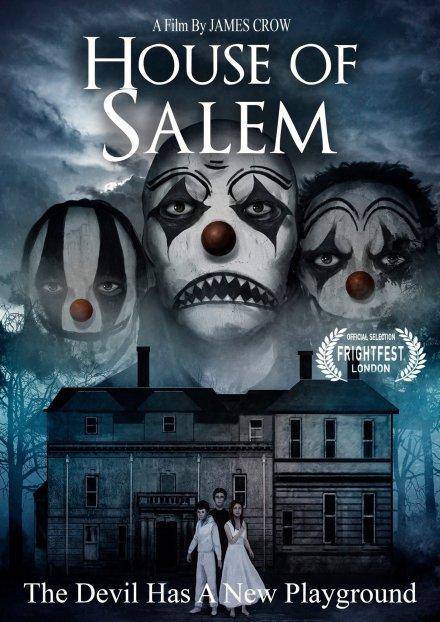 Need more to wet your appetite? Here’s the basics: When a troubled young boy named Joshua is kidnapped by criminals and taken to a safehouse to be held for ransom, he begins receiving communications from his dead brother about sinister activities that have taken place within its walls. Meanwhile the group of kidnappers start being taunted and stalked by hooded cultists, as the dark purpose for visiting the House of Salem is revealed. 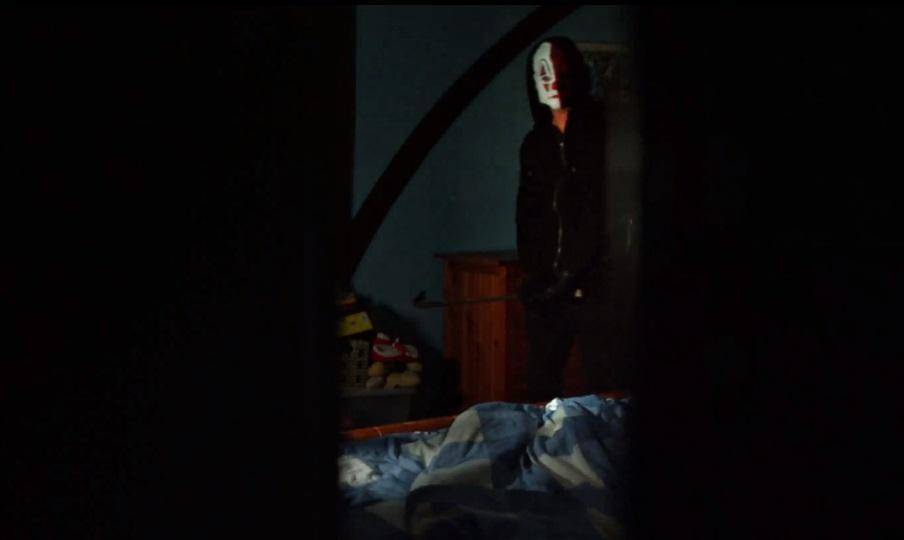 So what about those creepy clowns, you ask? Well, that’s the preferred disguise of the kidnappers in what turns out to be the film’s most tense and effective scene. The film opens with little Joshua being put to bed as figures in genuinely frightening clown masks start appearing in the background. Soon the knife wielding babysitter is subdued by the intruders, while Joshua is dragged out from his hiding place under the bed and thrown in the trunk of a car. Then the real movie begins. 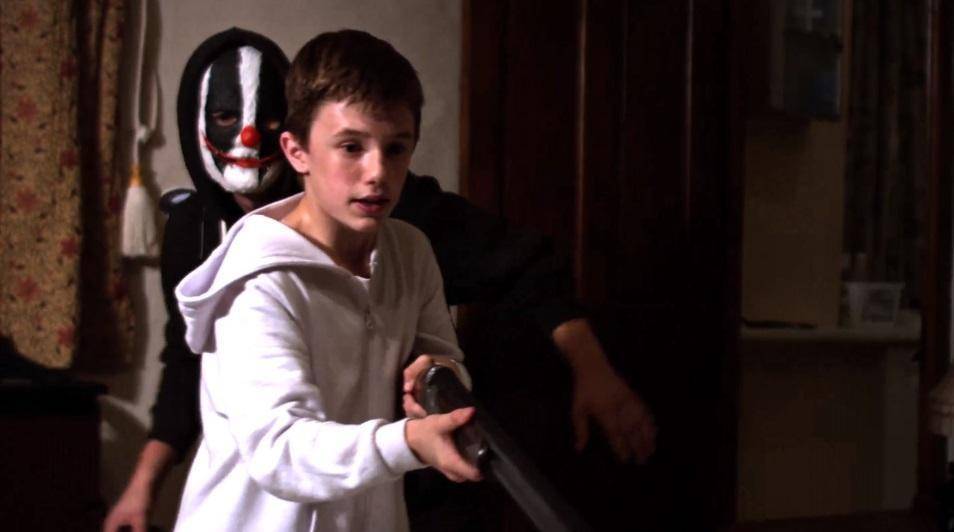 You see, House of Salem is sadly not about a grotesque gang of jesters killing at random during home invasions like it’s the night of The Purge. Nor does it take the slow paced tact of the truly haunting suspense film The Strangers from 2008. House of Salem is more of a crime based drama with a little bit of Satanic flair thrown into the mix, as opposed to straight up horror. Yes, there’s some human sacrifice involved, but are the supernatural elements really meant to be the focus of the film? Let’s explore. 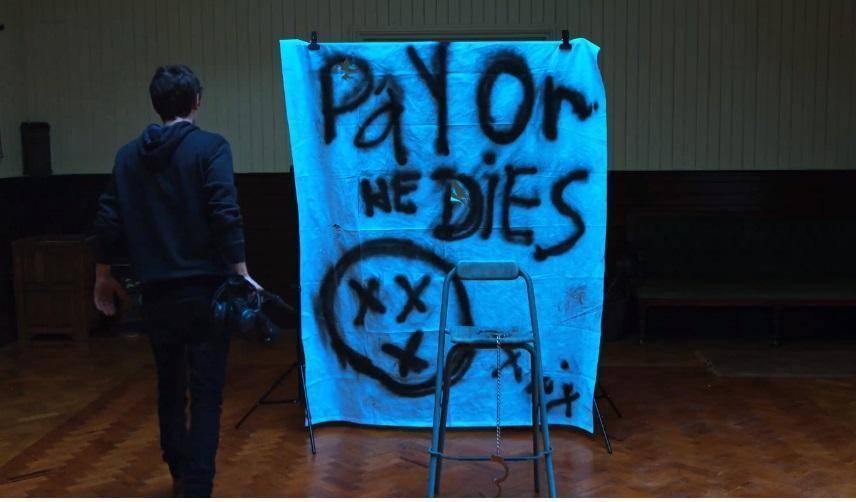 The first plot twist arrives following those intense few moments after the abduction, where the viewer realizes that the bulk of the movie is actually spent on getting to known this gang of villains and what has motivated them to become kidnappers. It’s a focal shift I was not expecting. 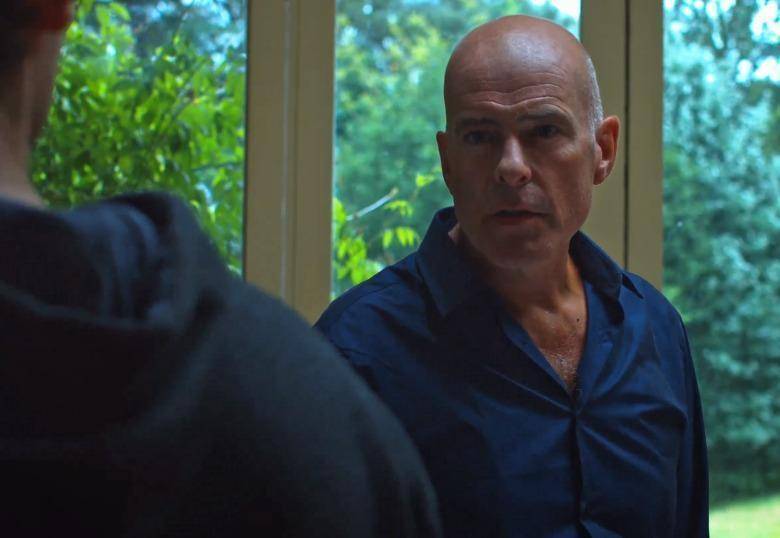 The most intimidating figure behind the mask is a bald headed baddy named, Jacob played by Leslie Mills. Jacob is apparently the guardian of the only female in the group, a young brunette who goes by the name of Nancy played by Jessica Atherton. 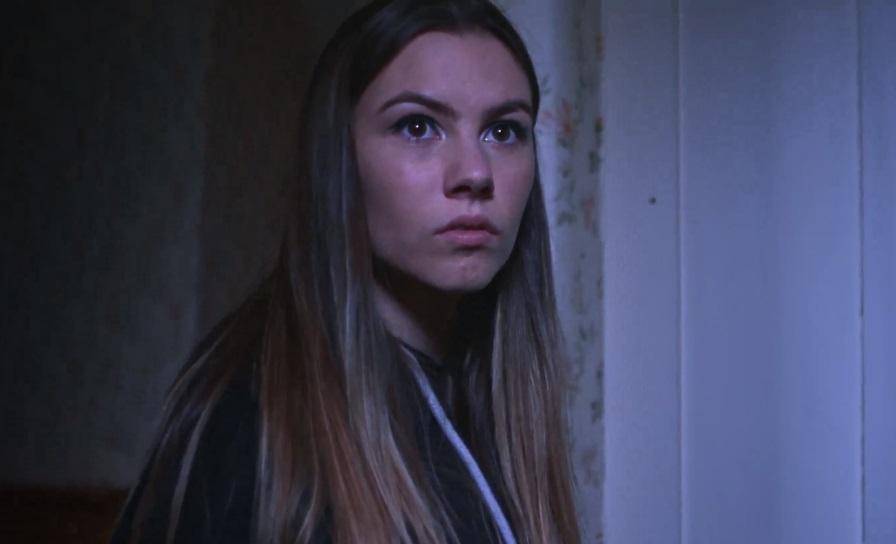 Jacob runs the operation with an iron fist and biting tongue, especially when it comes to protecting Nancy from the advances of the other blokes in the band. Though she seems to be a spitfire capable of taking care of herself. 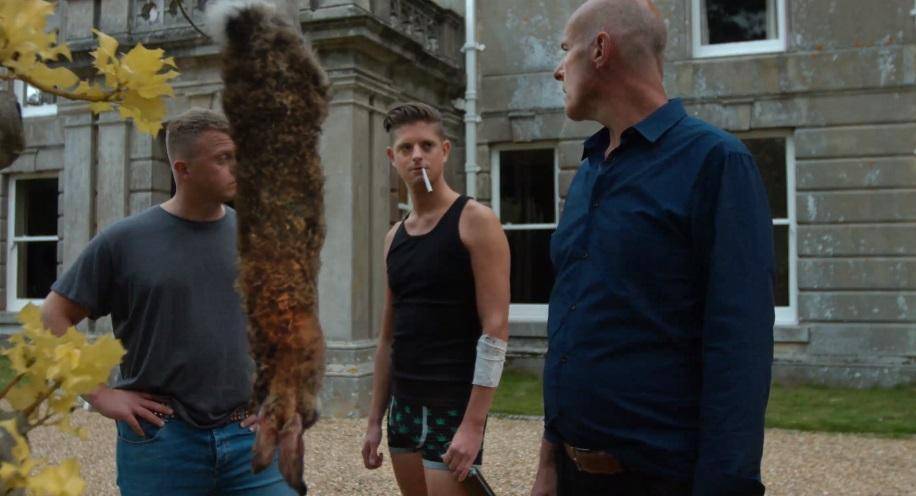 The muscle behind the kidnapping are two hot-headed characters named Mick and Craig that serve mainly to add a little unpredictability to the scenario. For example, Mick at one point has to be reminded not to kill anybody during their operation, while Craig seems ready to flee the scene at the slightest hiccup in the plan. The 2 actors have an intense look and are believable enough for being the least developed as the story plays out. 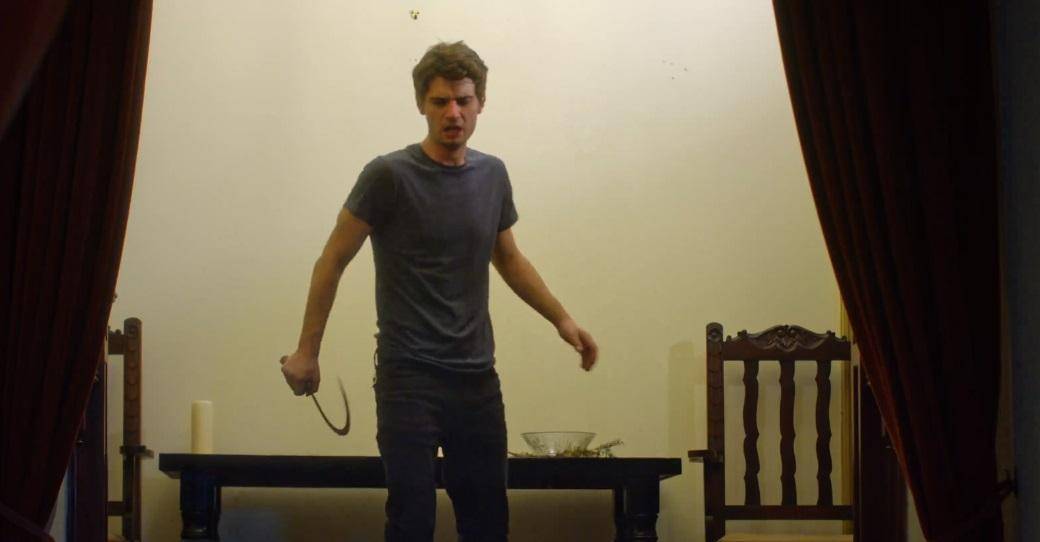 Finally there’s the the pretty boy tech operator, Jack, played by Jack Brett Anderson who obviously has a soft spot for Nancy and honestly seems much too kind hearted to have gotten wrapped up in such a high stakes scheme. Though the character seems out of place in this group of criminals, Anderson is the most natural presence on screen by a long shot.

Eventually the group comes across video tapes featuring young, captive children professing their roles as deliverances to Satan in ritual sacrifice, which puts Jacob’s crew on edge, as they start coming apart within the walls of what was supposed to be a safehouse.

I mentioned earlier that House of Salem is a slow burn and that’s because most of the film’s run time is spent on exposition. Director, Crow has written many scenes allowing Josh, Nancy and Jack to give their back stories about being orphans, but the acting performances are passable at best. Without a real sense of style in the filmmaking, these scenes do little to amp up the suspense. 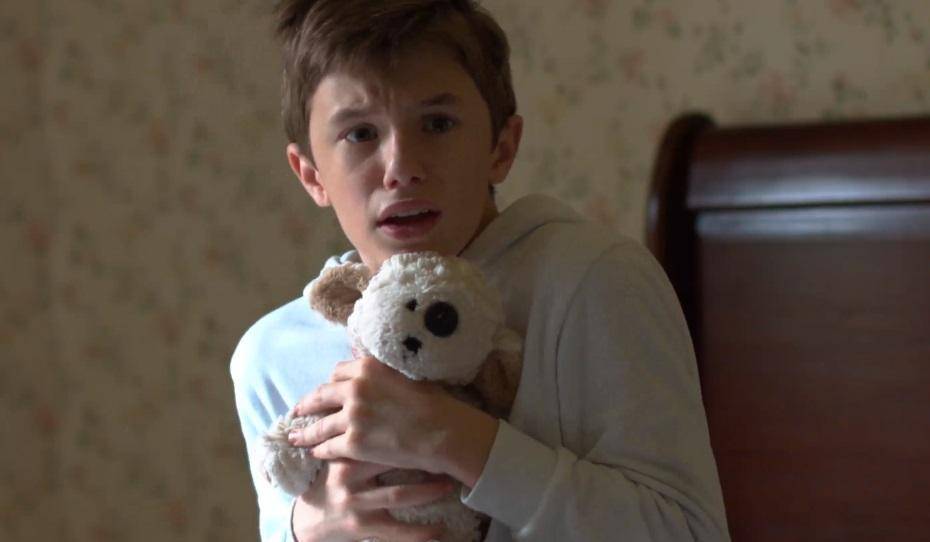 Though he’s given quite a bit of screen time, Liam Kelly who plays Joshua is eternally stuck on the verge of tears with a trembling timber to his voice and looks much too old to play the innocent babe in footie pajamas. Atherton’s Nancy plays anger fine, but her moments of angst or concern fall flat. And as previously stated, this is what the bulk of the film is made up of. 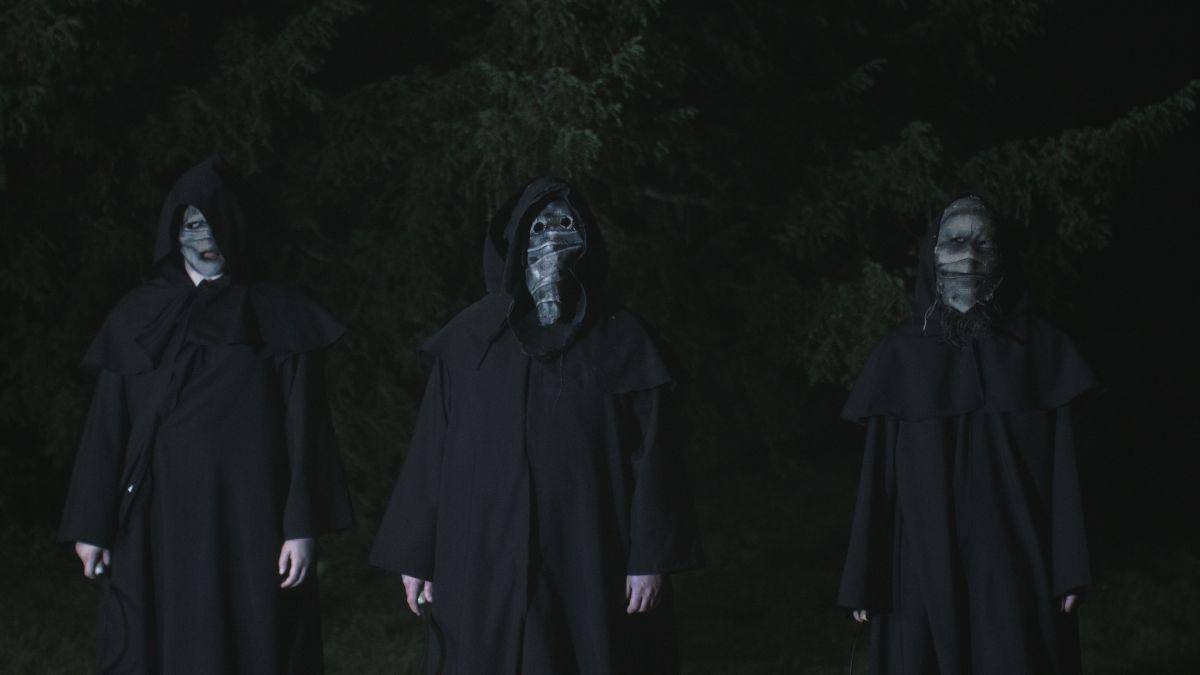 The action finally picks up in the last 20 minutes, when the phone lines are cut and hooded cultists are spotted through the window. Jacob realizes he’s been duped and soon finds Mick dead. The difficulty here is that these hooded killers look like rejects from Tatooine, with their long snouted or twisted burlap masks. Hardly as frightening as the clowns at the beginning.

After some poorly choreographed fight scenes between Jack, Nancy and scythe swinging cultists, the film transitions to a languid Satanic sacrifice scenario where creepy zombie children start appearing all over the place. Unfortunately the facial appliances are Halloween kit level quality, which detracts heavily from the scares.

Add to this the fact that by the end of the film’s climax you’ve seen cultists with camcorders joined by Satan himself rising from a crate looking like old time wrestler Papa Shango of the World Wrestling Federation and the nonsense really starts to pile up. Even the twist ending falls flat as the survivors are driven off to another doomed adventure, promising a sequel you’ll hope never gets made. 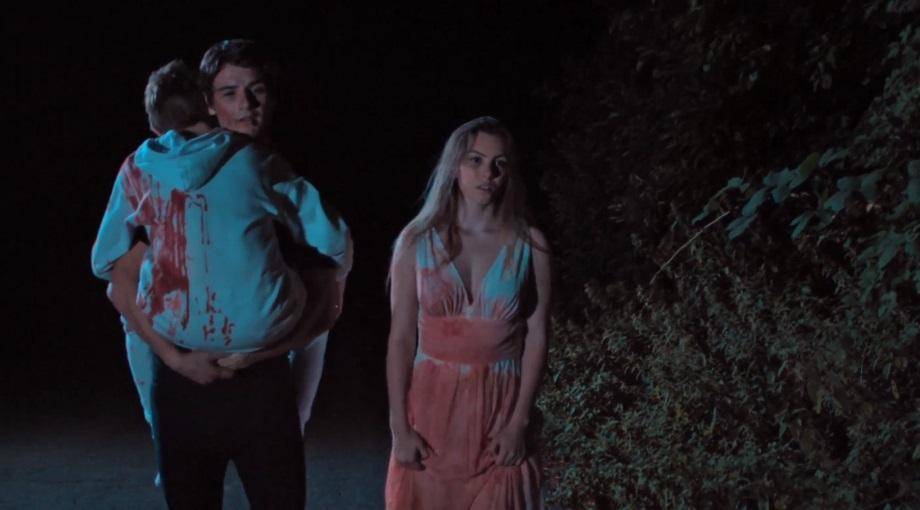 House of Salem is full of ideas for creating atmosphere, but sadly fails at putting the viewer on edge. The ending brings the film close to so bad it’s good territory, but the performances are terribly boring for the majority of the film that it’s really not worth the wait. Kill the lamb and spare the audience.

The Ballad of Benvolio Gallipoli – Session 1 – For Those About To Roll, We Salute You! Bad Apples Births Twin Horror Icons – Movie Review

Filmmaker Eric Mathis and his friends have been working on THE MACABRE, a new horror anthology to be released next year. The passion project is a throwback with practical effects and a love letter to the classics of the horror genre. Mathis’ anthology is currently running its crowdfunding campaign on

Schlock horror is a genre you either love to death or dismiss with disgust. The same can often be said about professional wrestling, the line is very clear between die hard marks and disdainful intellectuals. So it’s only fitting that the creative minds behind WrestleMassacre would combine the two forms

Three Tortured Minds are the filmmakers behind the recent indie horror film The Nursery, as well as the upcoming The Headmistress. They spend a lot of time promoting their own films, but there’s a whole world of neglected indie horror out there. Why not expose it to the world? That’s

Hex Studios, publishers and promoters of indie horror, have launched their own YouTube channel. You might be wondering why they didn’t do that years ago — well, they did, but we’re talking about Channel Hex, a spinoff of their regular channel that will spotlight filmmakers in the indie horror scene.