Hell’s Kitty is coming this March and she’s gonna give you more than a case of Cat Scratch Fever, if you’re not careful. This wickedly surreal comedy from writer/director/star Nicholas Tana pays homage to many cult classic horror films while scoring cameos from the original stars for a sexually charged tongue in cheek presentation. But will Hell’s Kitty have you purring or puking? Let’s find out.

Let me start off by admitting that I’m not a cat person. That being said, I’ve never bought into the “Cats Are Evil” mindset either. I inherited a corn-fed feline with a love for gravy through marriage, but our relationship is mostly one of indifference. This does not seem to be the case with the film’s protagonist however, who has a bit more complicated situation with the titular kitty in his life. Here’s the basic rundown of the plot. 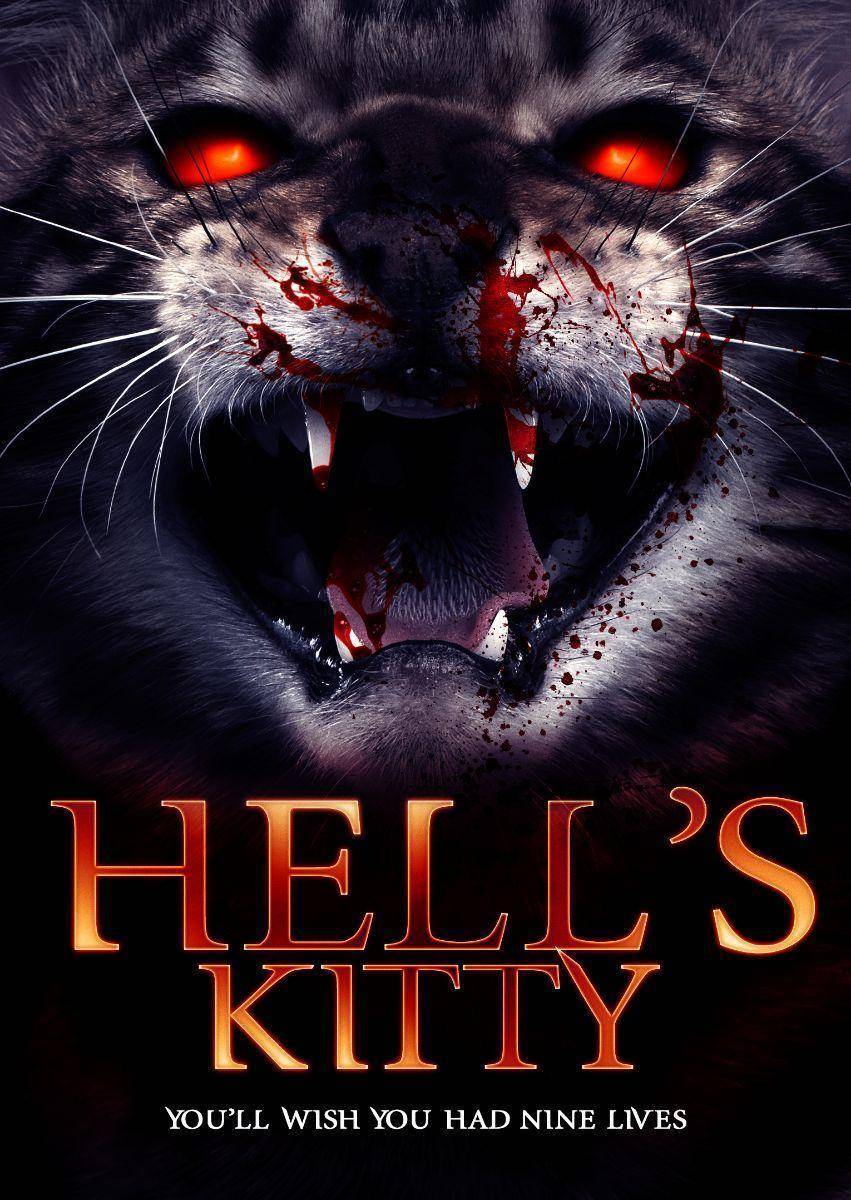 Hollywood writer Nick adores his pet cat, Angel, but recently she has become jealous of the women he brings home. Nick’s ladies get more than a catty hiss however, as Angel spills their blood quite regularly while satanic symbolism begins to appear in the apartment. The mystery unfolds further as Nick receives a diary from the mother of a forgotten fling and soon everyone from exorcists, to mediums and traveling bible salesmen are being terrorized by supernatural feline means. Is Nick’s cat truly demon spawn or is there another ghostly entity to blame? 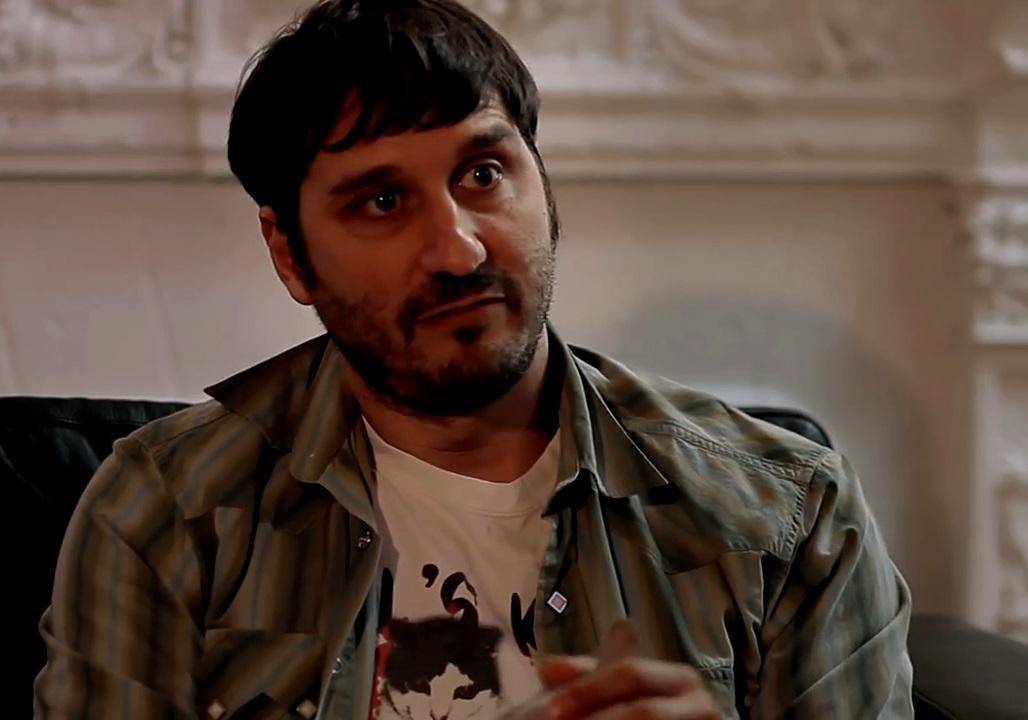 So here’s the thing I didn’t know about Hell’s Kitty going in, it’s not technically a film. Beginning in 2011, Hell’s Kitty has been a long running horror comedy web series where the plot mentioned above has been playing out. So this release is more a collection of episodes tied together using the narrative wraparound of a confession to a detective or a psychologist (it’s not really clear) as Nick recounts the recent weirdness in his life. As a result the story is a little choppy with multiple guest stars dropping in for cameos, but there are enough recurring characters in the story to hold it together. 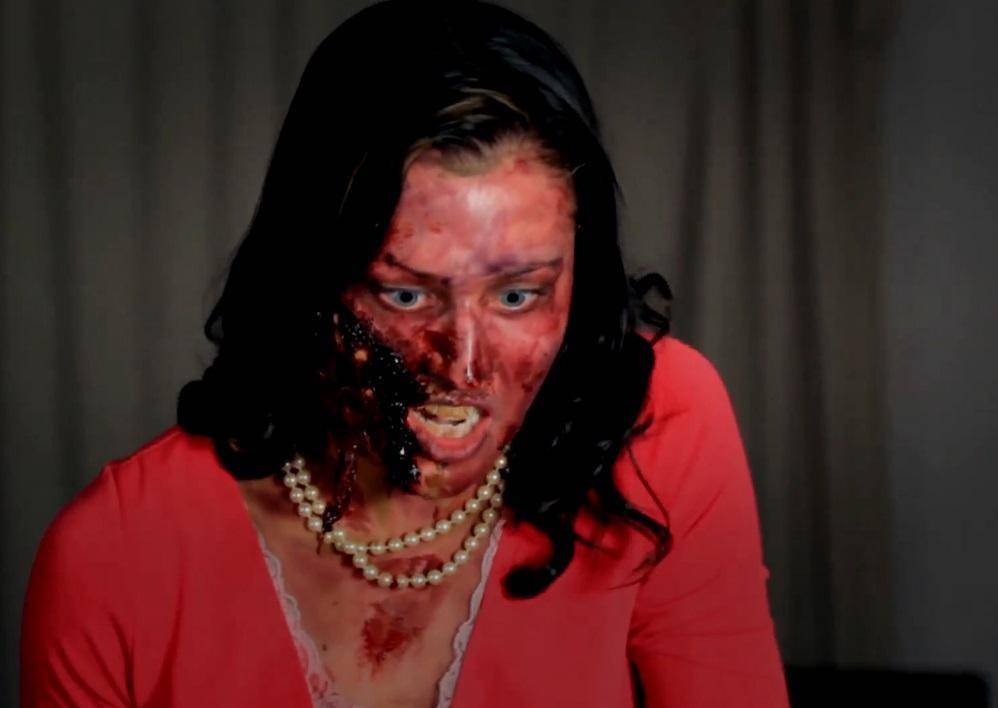 The first of these regular cast members is the delightfully funny, Lisa Younger, playing up the cute, but slightly annoying love interest angle. Coming off like Karen from Will and Grace meets Janice from FRIENDS, Younger has a fun energy as she chews the scenery. After a vicious scratch from Angel, Lisa threatens a lawsuit, but soon becomes mysteriously ill, returning to Nick’s apartment in a zombie-like form. Her disgusting flirtations are a real bright spot, as she vomits her way through scenes like a champ then forces Nick to worship her feet. 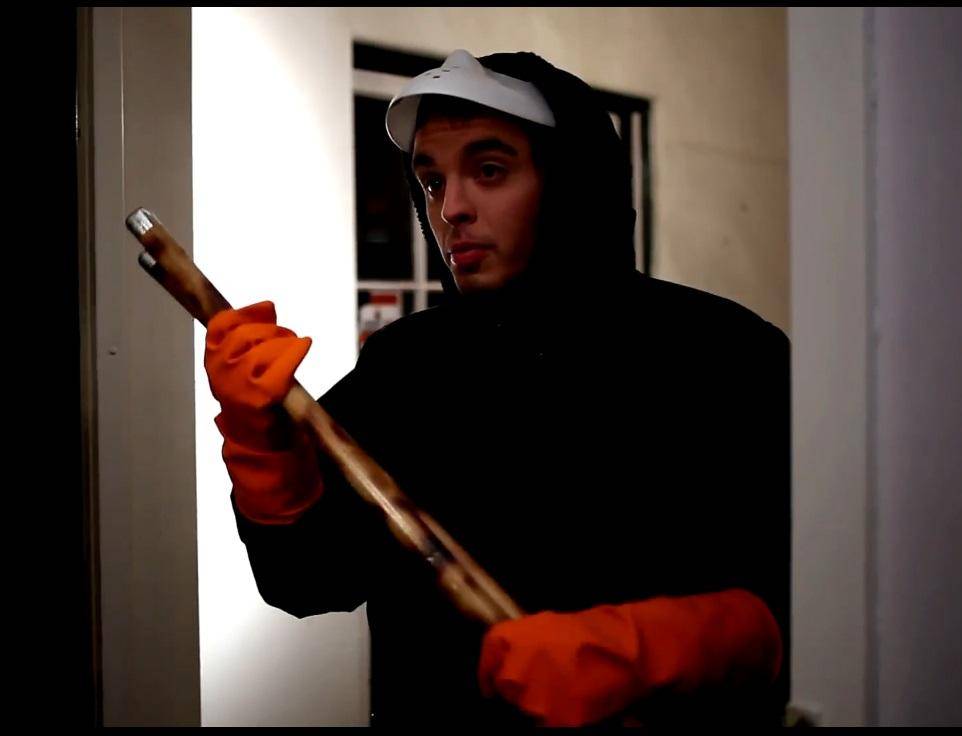 To a lesser degree we have Nick’s weird buddy, Adam Rucho. He’s the one who initially suggests that his pet may be the victim of demonic possession, arriving to the apartment in full body armor that includes a Jason Voorhees style hockey mask. The performance is pretty low-key, with Adam mostly playing sounding board to our hero until the character reveals a strange obsession with Nick that plays heavily into the climax. 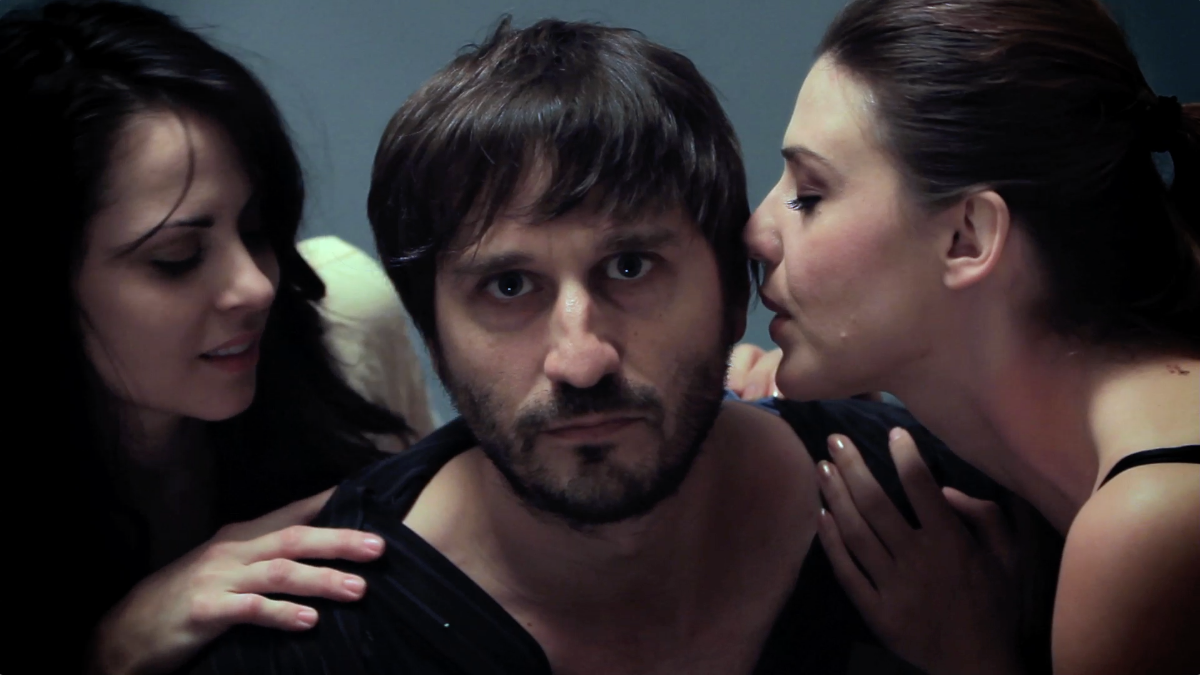 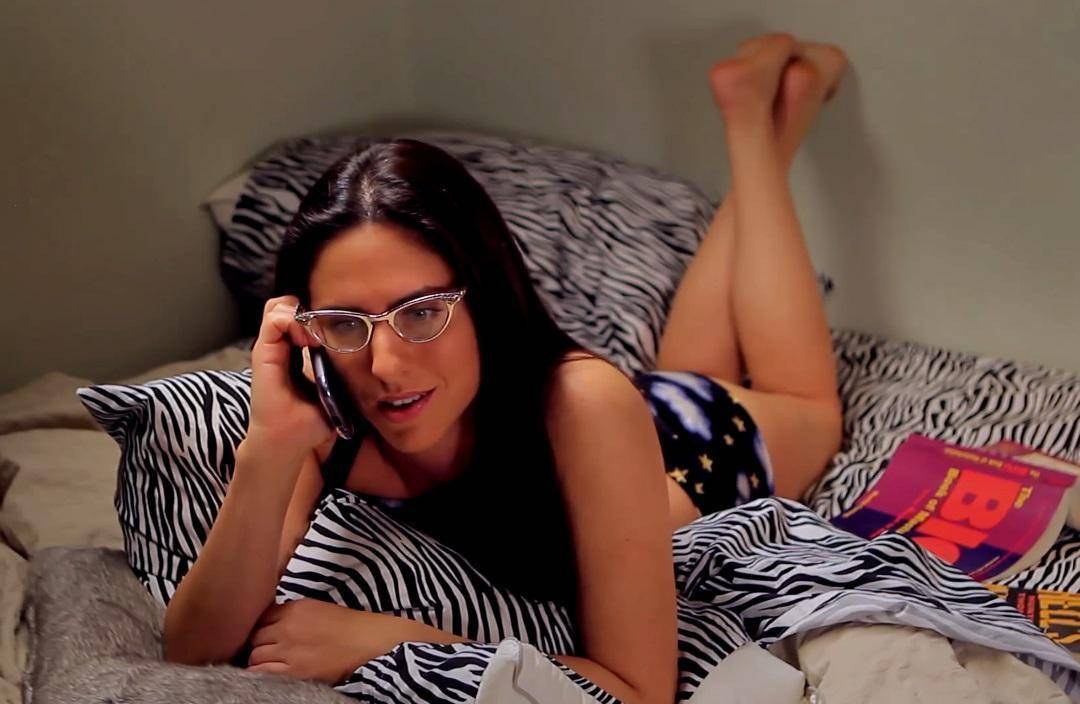 Dr. Laurie Strodes whose names has obvious ties to the Halloween franchise is played convincingly by Nina Kate, who brings a real charisma to the screen. Good performances really stand out in this film as the sometimes stilted dialogue and editing choices suck the energy from several moments intended to deliver on the humor. Of course, Kate’s scenes ultimately devolve into horrific sexual fantasy sequences, but in the moments where she becomes Nick’s confidant, she is extremely likeable. 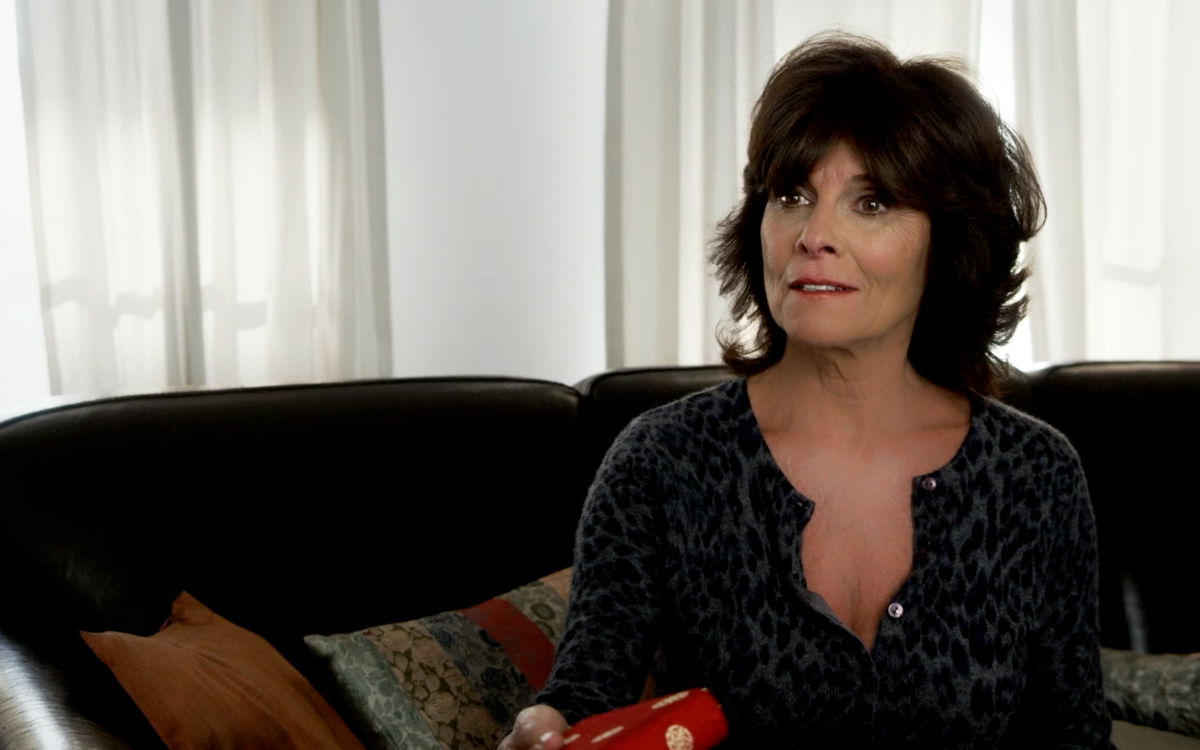 As mentioned above, the series relies heavily on cult film star cameos and for the most part they are worth the price of admission. Adrienne Barbeau plays it pretty straight as a grieving mother of dead gal named Rosemary who Nick can’t even remember dating, despite his name appearing prominently in her diary. There is also a great callback to Barbeau’s role in the Creepshow segment “The Crate” before she makes her exit. 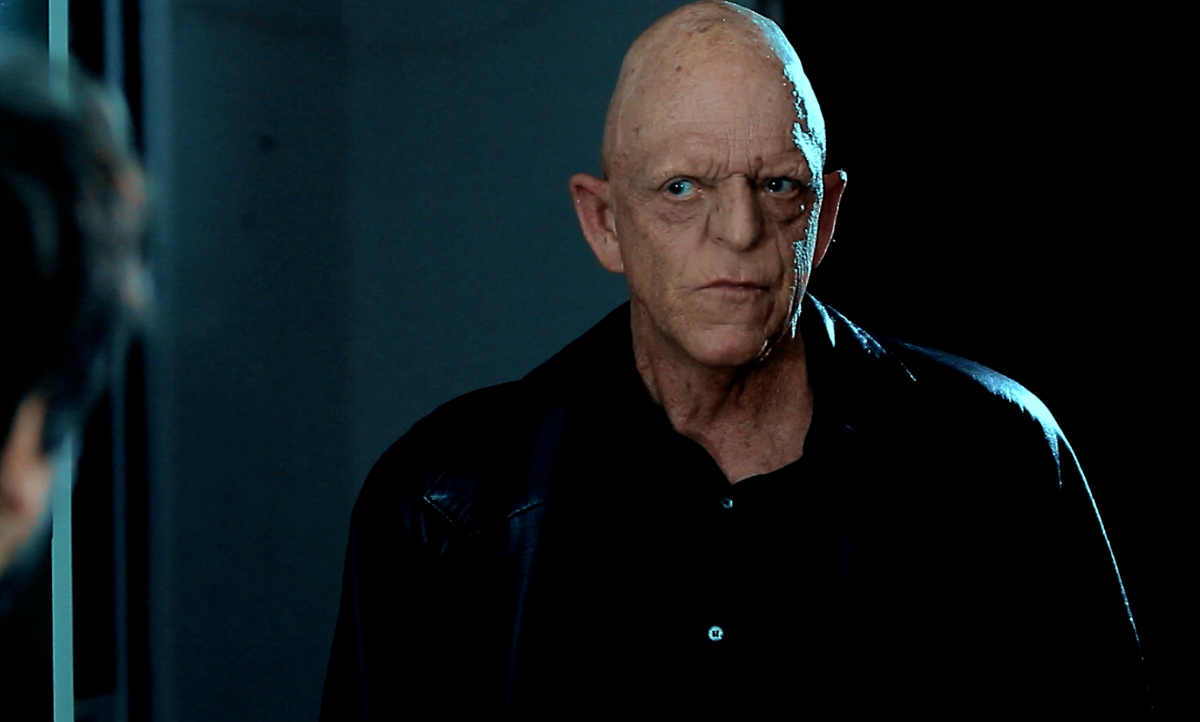 The unforgettable Michael Berryman, known mostly for his role in Wes Craven’s The Hills Have Eyes (though this reviewer is partial to his role in 1991’s The Guyver) has a brief appearance as Detective Pluto. While it’s nice to see him playing against type, the comedy mostly falls flat in this scene where the cop finds a severed finger, then quickly disappears. 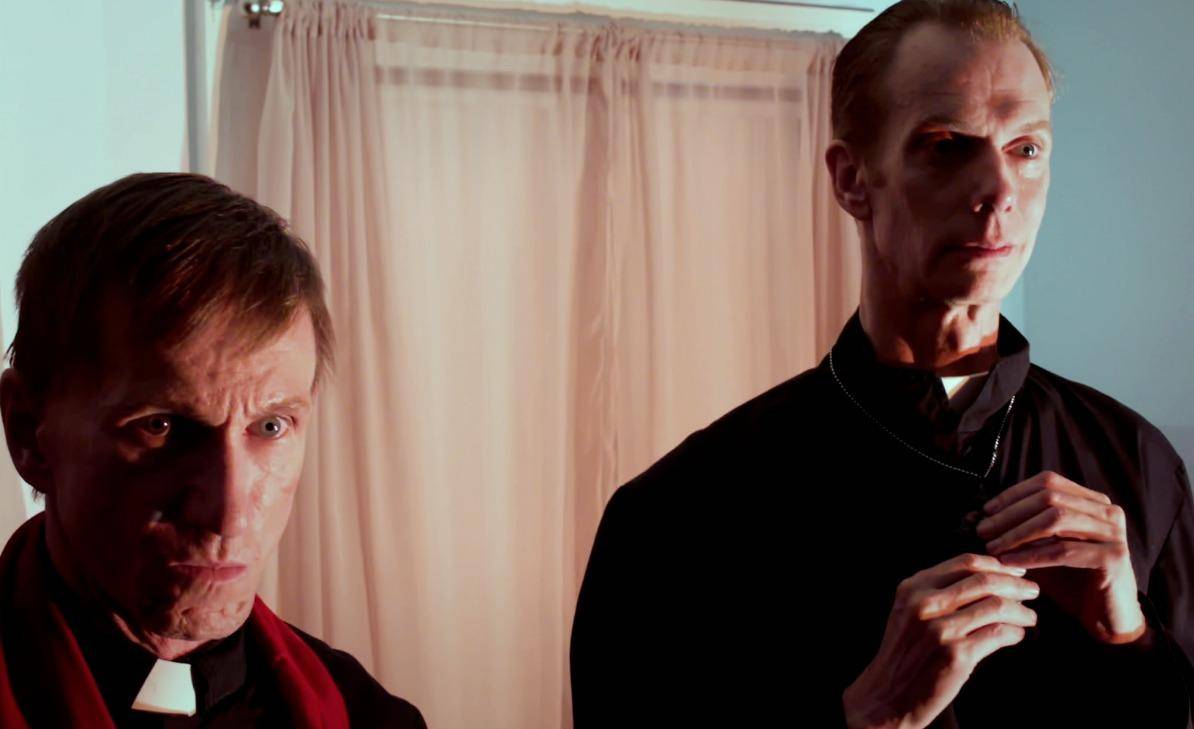 Digging deeper into Angel’s affiliation with Satan, Nick brings in two priests who specialize in exorcism. It’s nice to see Doug Jones free from body covering make-up required to inhabit comic book creature roles like Abe Sapien or the Silver Surfer as he puts on a priests collar to harass an evil spirit. There’s a great bit of dialogue involving a misuse of the word “Pet”-ofile before some gory revenge is enacted on these men of the cloth by the furry little Angel. 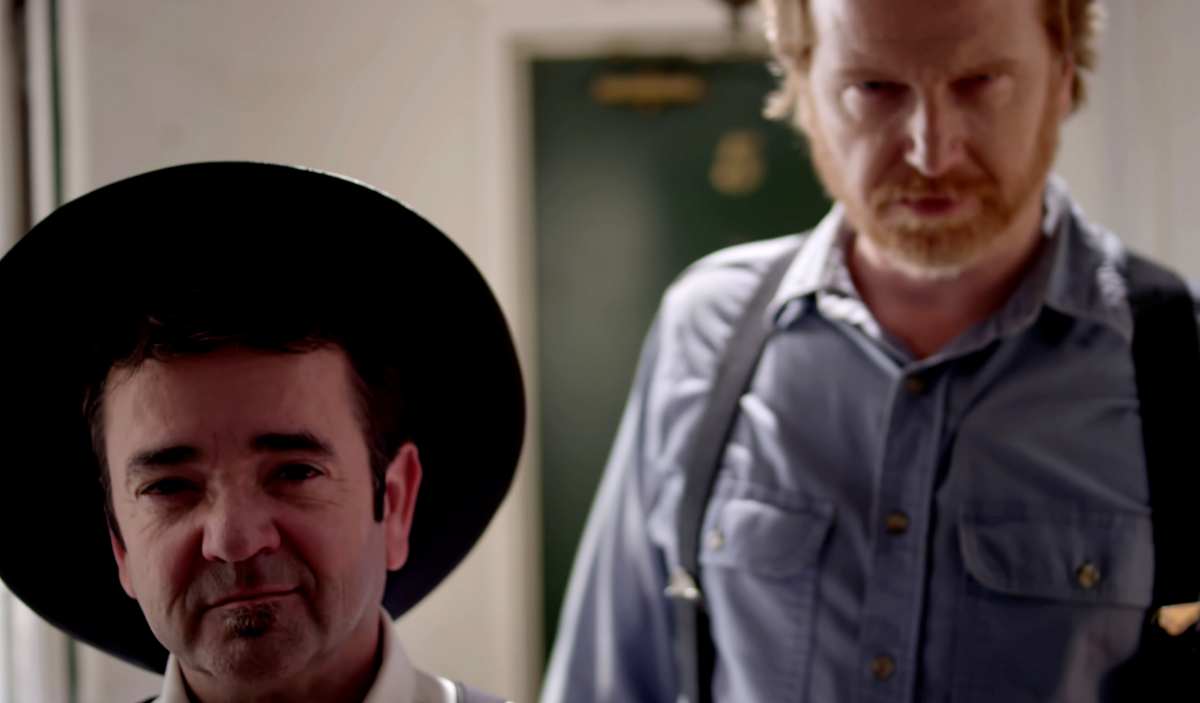 Tana’s best use of celebrity guest stars in Hell’s Kitty is found in the segment where John Franklin and Courtney Gaines reprise their roles from the film adaptation of Stephen King’s Children of the Corn. The duo trade truly clever banter like a creepy demon worshipping Abbott and Costello, with Gaines even picking up a guitar to sing a song about hating cats. Angel’s revenge against this “defiler of the blues” is pure physical comedy that will have you rolling. It’s the best moment in the film. 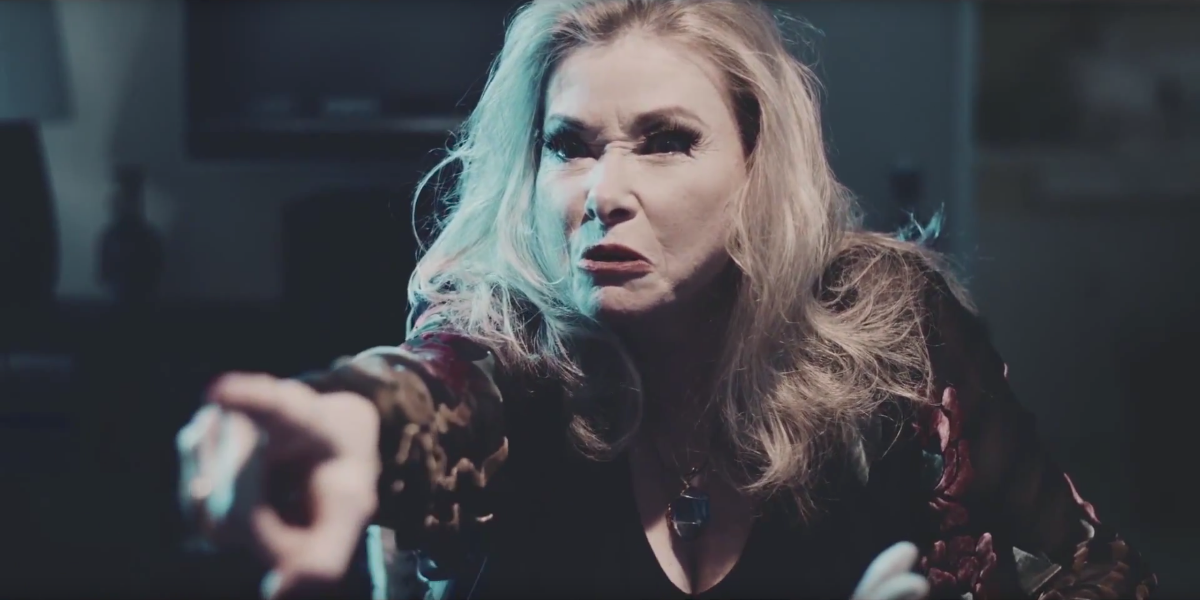 As the story winds up Nick enlists the help of 2 mediums played by Night of the Comet’s Kelli Maroney and Lynn Lowry from Cat People, which you might say is puuuurrrfect casting (sorry, had to go there). These psychic sisters uncover the truth of the cat’s possession and some startling revelations are made before the cursed kitty is freed from influence of the vengeful spirit from beyond the grave who appears in a burlesque style musical performance. 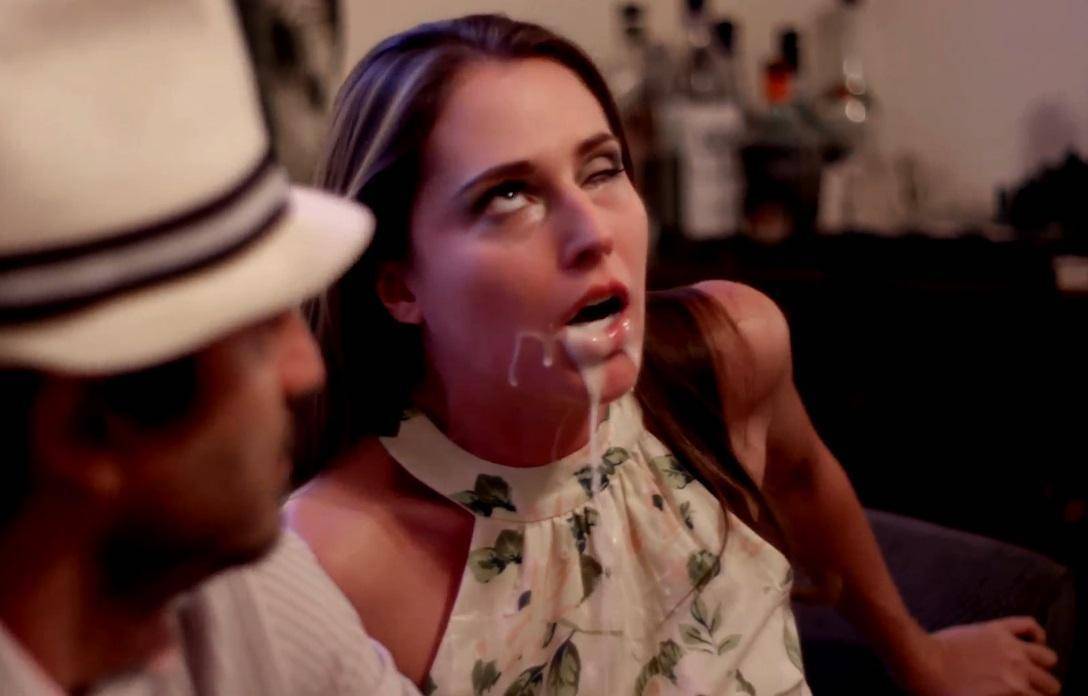 The second to last scene finds Lisa Younger returning again for some more hilarity. Now healed from her Zombie disease and looking to get Angel out of the picture so she can have Nick all to herself, the character’s final fate is disturbingly funny and acts as a nice bookend to the rest of the film. 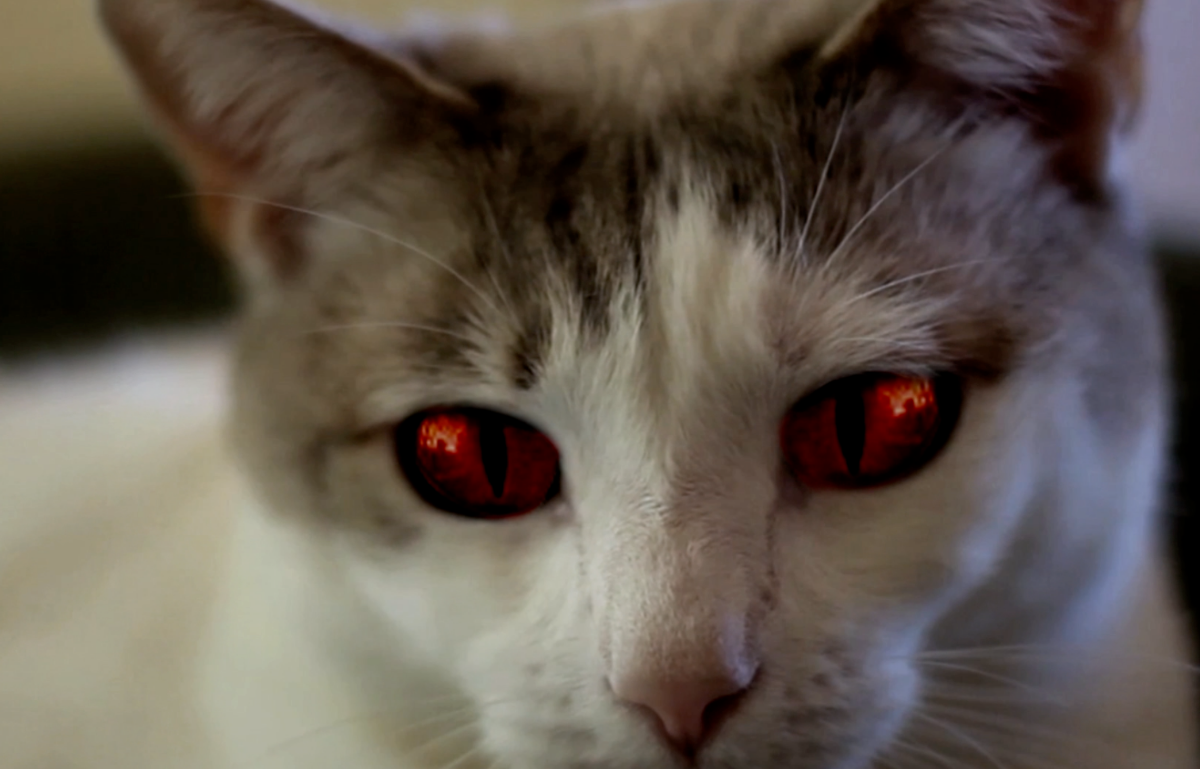 As stated previously, Hell’s Kitty is a bit of a hodge podge in terms of storytelling. The episodic nature of the plot doesn’t make for a smooth move watching experience, but if you’re a fan of binge watching TV it shouldn’t bother you too much. Fans of the web series will enjoy the new footage and if you’re a newbie like me there’s plenty of unexpected twists, gore and racy fun to be had.

Hell’s Kitty is available on VOD March 13, 2018 and on DVD March 27th, 2018 via Wild Eye Releasing. If you want a little preview, check out the music video for “Chainsaw Kitty” a fun rocker from the film here.

How many times have you found yourself putting in an honest day’s work and suddenly being caught up in a one man mission to rid the Earth of other dimensional demons (for lack of a better term)? Not nearly enough, you say? Then Driven, the quirky adventure film from writer/star

Some of the most memorable horror films of all time have scary stories surrounding their very production. Was it just bad luck, or were the movies….CURSED??? Nah, it was bad luck, there’s no such thing as curses. We’ll see what kind of view the upcoming docu-series CURSED FILMS takes as

What if a haunted house could chase you down and force you into it’s insidious interior? The frightening answers come hard and heavy in The Toybox. This unique new horror movie from director, Tom Nagel and writer Jeff Denton explores new horror territory while taking the viewer hostage for a

Gehenna: Where Death Lives is a horror adventure film from writer-director, Hiroshi Katagiri featuring appearances by genre veterans Lance Henriksen and Doug Jones in a time-bending story that will freak you out and teach you more about the frightening history of Saipan than you ever wanted to know. Speaking of