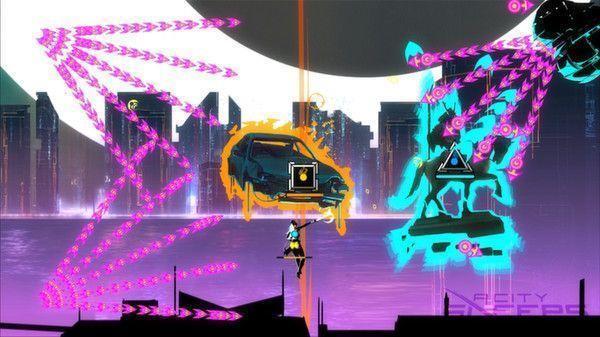 Harmonix, the developer best known for its music themed titles, has released its latest title. A City Sleeps is now available to download on PC and Mac through both Steam and the Humble Store. A discount that is being applied to celebrate the release of the game brings the game to $13.49, while the Deluxe Edition is available for $16.19 and comes with a set of exclusive wallpapers and the soundtrack. The discounted price ends next week so if you want to pick up the game then now would be a good time.

Harmonix describe the game as:

“From Harmonix, the creators of Rock Band and Amplitude, comes a fresh new approach to the traditional shoot ’em up! All the action in A City Sleeps is driven by an entrancing experimental hip hop / electronic soundtrack, with no beatmatch required. The game’s Idol System also introduces a tactical layer on top of proven shmup gameplay to accommodate a range of play styles.”

A City Sleeps is a bullet hell type shooter in a similar vein to Geometry Wars and Galaxian. The player controls the main character Poe using a twin-sticks scheme as the protagonist enters the dreams of the citizens of SanLo City in order to help them overcome an evil force that is controlling them. According to Harmonix, each level has a unique song that is created as you play it, giving each individual player their own person soundtrack while they are playing the game.

The game is the first game that Harmonix has released since Dance Central Spotlight in September. The developer has been working on Fantasia: Music Evolved, a Disney inspired title that makes use of Kinect, for several years and is set to release it later in the month. They are also working on a number of other projects such as a HD reboot of Amplitude, a shooter called Chroma and an unnamed Samsung Gear VR project.