While its easy to say that a lot of people now know the names of Star-Lord, Gamora, Drax, Rocket Racoon and Groot, a few years back that wasn’t the case. Marvel took a big gamble putting a cult-classic comic on the big screen, but it worked in their favor, and now everyone knows the Guardians of the Galaxy. For me personally, it’s my favor Marvel film, and one of the best comic movies I’ve ever seen. So when the sequel was announced, I was excited. And though Guardians of the Galaxy Vol. 2 doesn’t pack the same punch and pizazz as the original, it’s still a good movie.

WARNING: There WILL be spoilers in this review, you have been warned.

One thing that immediately struck me about Vol.2 is that the movie wasn’t anything like I expected. The way the trailers were cut and shown, you thought that the big bads were the Sovereign and the Ravagers. And make no mistake, they are a big part of the film, but they aren’t the main threat of the story. There were a lot of twists in the narrative, and it did benefit the plot a great deal, especially since in the age we live in it’s hard to keep anything a secret.

Moving onto the story, we meet the Guardians of the Galaxy on a job for the Sovereign, with their fame getting them work because of the events of the first film. Of course, things go horribly wrong because of a bonehead move by Rocket. The Sovereign retaliate, which causes a meeting with Ego; Peter Quill’s father. To be clear, we knew Ego was Quill’s father from both from trailers, but props to Kurt Russell for portraying him both in a very human way and in a very Celestial way. Ego is meant to be larger than life, and as the movie continues, you see how Ego thinks in that fashion. 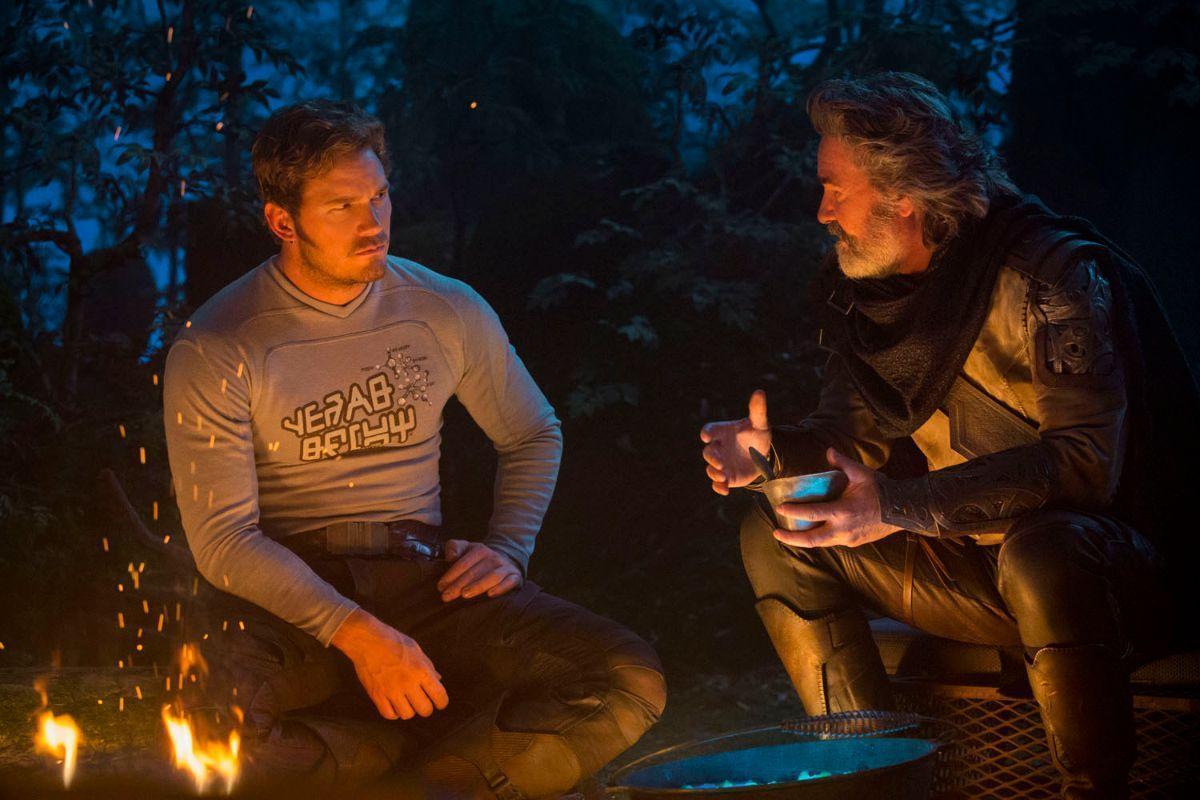 You’d think that this would be the focus of the film, and in a grand scheme way it is, but GOTG Vol. 2 has a lot of plates in the air, not unlike the first film. Because of Ego’s arrival, the team splits, with Peter, Gamora, and Drax going with Ego, while Rocket, Groot, and the newly captured Nebula stay behind. But, that doesn’t last when the Ravagers show up.

The Ravagers are back naturally, and we get a lot more depth on them as well. Yondu in particular shines in this movie, and will no doubt become a fan-favorite with his scenes. An early scene with a surprisingly lengthy cameo (I won’t spoil it, it’s too good) shows Yondu’s pathos. His loyalty and compassion for Quill and the other Guardians leads to a mutiny which causes Yondu to be deposed as captain of his Ravagers. This builds to a rather haunting scene that may surprise you.

On top of that, Rocket is going through a phase of ticking everyone off, Baby Groot is being Baby Groot, Drax has a new friend in the form of newcomer Mantis, Gamor and Nebula want to kill each other, Peter wants to know more about his parentage and why Ego left his mother, and of course the Sovereign want to kill all who have slighted them. Does that sound like a lot? It kind of is, and whereas the original movie bottlenecked all these stories and tied them around Ronan, that doesn’t happen here. As a result, the plot suffers for it. Don’t get me wrong, there are some powerful character moments here. Yondu, Drax, Mantis, Gamora/Nebula, and yes, Star-Lord, all have great scenes, but they don’t always land.

This brings me to the comedy of the film. The original movie had the perfect amount of comedy coming from multiple sources and executing the material in different styles. That’s what helped it succeed. Here, the comedy does hit, but it also misses quite a bit. Drax has gone from oblivious about metaphors and jokes to talking about how certain parts of his body are sensitive, or how his parents used to talk about how they conceived him. Funny? Sure. True to character? Eh, not so much. This is really sad because one of the most beautiful parts of the film is where he’s talking with Mantis about his daughter, and he’s completely calm and untouched by the emotion in his expression. Then Mantis (who can read and feel the emotions of others) touches him and she starts crying, showing the pain he was feeling. That was beautiful! But then, he has these comedic moments that undercut the more emotional ones. And while Baby Groot is totally adorable, and has some great scenes, some of the comedic Baby Groot scenes tend to drag on, and on, and on. 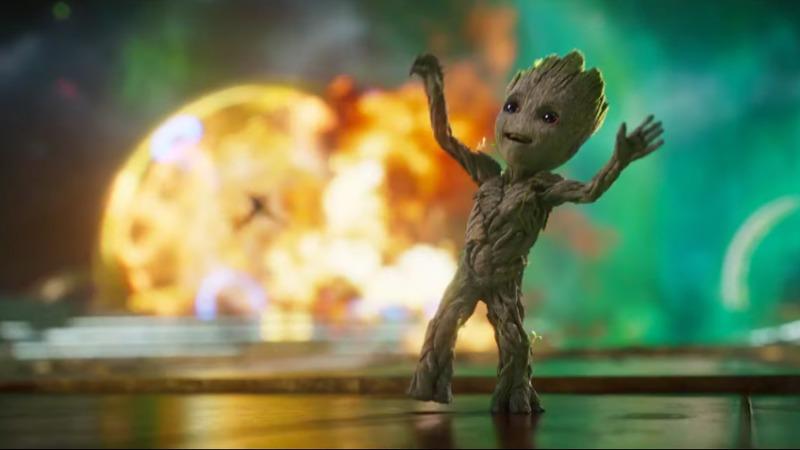 Don’t think I’m hating this film though. I really did love it, and the final act or so really brought things together in a big, satisfying way. I didn’t expect Ego to turn out as the chief villain. I probably should have, but again, the film tricked me with the trailers. His descent from perfect dad to monster was well done, and very believable. The fight scenes that arise from it are absolutely stunning. The same goes for when Yondu gets his revenge on the traitorous Taserface and the other Ravagers. If you thought his fight against Ronan’s men in the original was epic, wait until you see this. Plus, when the comedy hits, it produces some great laughs. A scene involving jumping through space left me nearly rolling on the theater floor. And hough the ending is actually rather tragic, there’s beauty in the loss that occurs, as it shows that even in loss and pain, there can still be light and revelation.

There are few things I want to note. One is that I’m glad they didn’t force the Star-Lord/Gamora relationship more than they did. In the first movie it was a simple flirtation. Here, it’s more of an advancement that flirtation, but they didn’t get together at the end, which I appreciate. For me, there’s nothing worse than a forced relationship, and James Gunn seems to feel the same. Also, props to the ladies behind Mantis and Nebula, Pom Klementieff and Karen Gillan. These characters could’ve easily been throwaway roles, but they played them well, and Karen Gillian especially stood out among the cast as being one of the strongest characters

For those who look for Easter Eggs, Guardians of the Galaxy Vol. 2 has them in bulk. There is one that’ll set the internets ablaze because they’ll have claimed they called this particular scene. And even if you don’t know about this particular fan theory, the arrival of these characters will be something to cheer for in a big way.

Finally, the soundtrack for this film is pretty dang awesome. Again, not as good as the original, but it’s really close. There will be songs that push the narrative in a fun way, and others that really nail the feelings of the characters. You’ll enjoy it for sure.

Make no mistake, Guardians of the Galaxy Vol. 2 is a visually stunning, hilarious, and fun film. It’s not as good as the original, but that’s OK. I still look forward to seeing more of this team, especially when they go and visit another team in the Marvel Cinematic Universe.

If You Want A Bayonetta Amiibo, Today’s The Day Kevin Feige Says Marvel Movies and Shows Will Cross Over Eventually