Guardians of the Galaxy: Season 2 for Animated Show Returns in March

Disney XD and Marvel confirmed this week that season two of the Guardians of the Galaxy animated series is going to continue very soon. New episodes will debut on the network on Saturday, March 11. The occasion will be marked by a one-hour premiere of two back-to-back episodes.

Additionally, Marvel has also confirmed there will be six, new animated shorts on the adventures of the five main characters of the Guardians starting on February 27. These shorts will be available on the Disney XD app, VOD, and Disney XD’s YouTube channel.

The first episode on Saturday, March 11 at 9:00 p.m., EST/PST, will be “Stayin’ Alive.” In this episode, when the Guardians are trying to dispose of Thanos’ asteroid, they find it has been taken to a secure facility that happens to belong to the Avengers.

In “Evolution Rock” at 9:30 p.m., EST/PST, the Guardians and Avengers now have to team up to find the secrets that are inside Thanso’ Asteroid. So it looks like the two back-to-back episodes will feature a fun team-up with the Avengers.

Guardians of the Galaxy is produced by Marvel Animation. It’s creative team includes executive producers Alan Fine, Dan Buckley, Joe Quesada, Cort lane, Eric Radomski, and Jeph Loeb. The supervising producers are Marty Isenberg and Harrison Wilcox. The supervising director is Leo Riley.  You can also check out a new image from the episode below, courtesy of Marvel Entertainment: 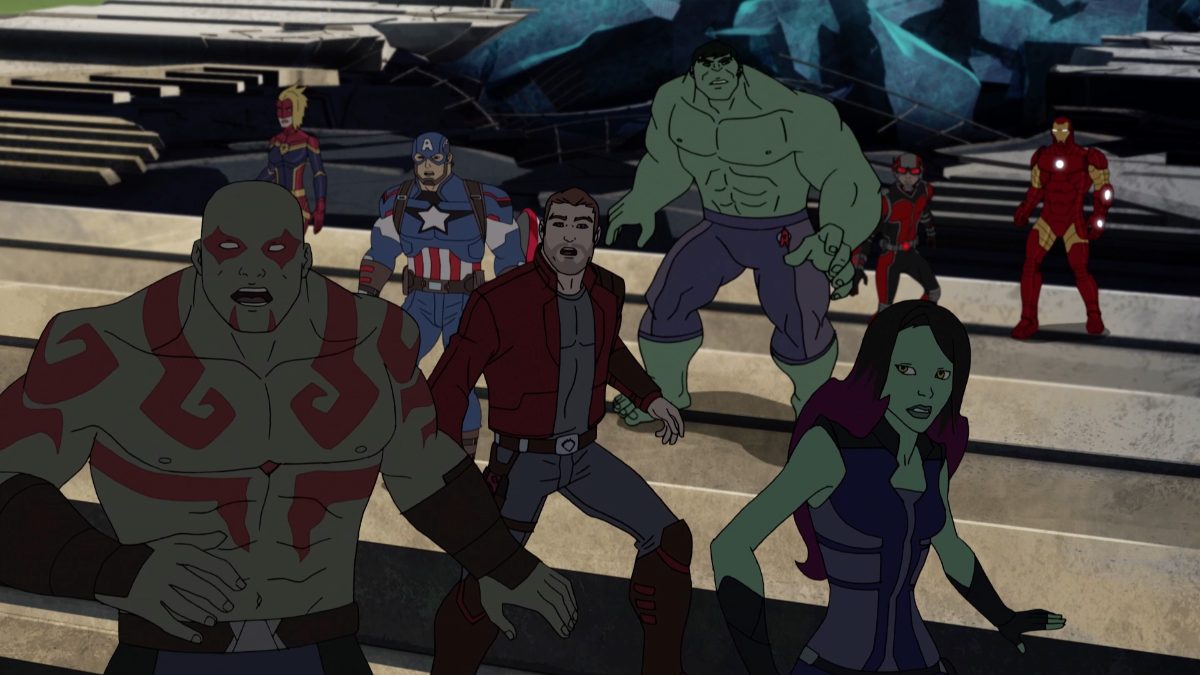 Jeffrey Harris, a movie, TV, video game, pop-culture, and UFC/MMA aficionado, resides in Los Angeles, California. He is a graduate of The University of Texas at Austin's Radio, TV, Film program. Jeffrey is a dedicated pop-culture geek and UT Orange Blood.
Voltron: Legendary Defender Season 02 Review Next DCTV Crossover To Be “True” Crossover

Don’t look now, but Kickstarter has been invaded by Cranky Chinchillas. And you really don’t want to deal with chinchillas when they’re cranky! It’s a new tabletop card game introduced by a Canadian indie studio. In Cranky Chinchillas the nasty Chin Empire has decided to invade and conquer the community

I’m big on staying through movies until the closing credits end. I look out for all sorts of things, from mid-and-after-credits scenes to random jokes to the names of the people involved in making the movies. That’s how I came across my newest interview subject, Marian Green, whose name I