Geek Tank Games TableTop Tokens Review – For Those About To Roll, We Salute You!

Geek Tank Games’ TableTop Tokens have terrific art, with good detail and a fun variety of tokens. They’re waterproof and pretty difficult to bend or crease. It looks good, helps with creativity and makes the DMs job easier.

Thanks to the wonders of the internet, connecting with the gaming community is so easy that it can happen without even trying.  A few weeks ago, I got a tweet (hit me up @DMKyleQuimby) from Geek Tank Games.  They’ve got a Kickstarter launching soon and wanted me to check out their Tabletop Tokens and get the word out.  They sent me these great terrain kits and I got to work using them and sharing them with my fellow DMs.  I have to say, they are terrific.

During the 4th edition days, mapping and terrain became very important.  Sessions got so involved in intricate combat tactics that knowing exactly what your surroundings were was critical.  Now, with 5th edition is not as critical but it is still, in my opinion, an important tool in the DM toolbox.  The more the players understand about their environment, the more creative they can be.  Making maps can be a bit of a time killer, especially if you know that your session will cover more than one scene.  Products like Geek Tank Games’ TableTop Tokens can significantly cut down on prep time. 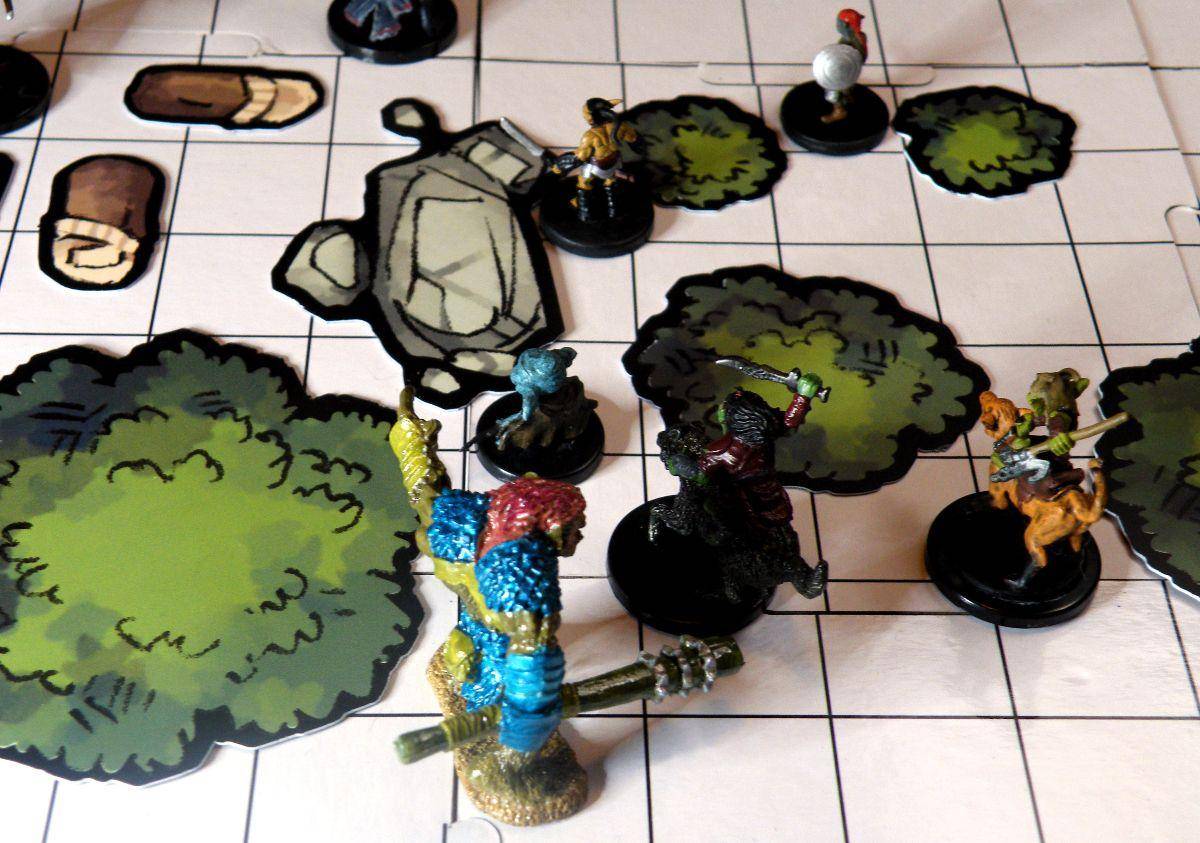 Geek Tank Games makes three different token sets: Castle Siege, Camping and Castle Furnishings.  All three have terrific art, with good detail and a fun variety of tokens.  I really liked the Camping set in particular.  In my opinion, adventuring teams don’t get attacked while they camp out for the night enough.  This set makes those random, middle of the night events so much easier to set up because all you really need to do is place a few of these tokens on a blank map surface and there you have it!  The beauty of 5th edition even means that a grid isn’t as important either.  Add in a quickly sketched tree, or a stream or pond and really make that scene pop.  I used the Castle Furnishings to put together a very elaborate mountain cabin scene, complete with bear skin rug.  All I had to do was draw the walls and doorways.  As the PCs moved from room to room, I made new walls and dropped a few tokens on the map and presto!  In a few weeks, I’m going to try out a new idea: improv mapping.  I’m going to put all my map tokens into a bag.  After I draw out the dimensions of the scene I’m going to roll a die, and pull that number of tokens onto the map and see where the story goes.  I loaned the Castle Siege set to my buddy GM Gene for a session I played in and that session really showed me the potential of having tokens on the map.  Sure, Gene could have drawn a ballista on the map, but having the token there inspired one of the players to INTERACT with it, by turning it around and using the enemies’ firepower against them.  By having the token, the map can change as the scene plays out.  It looks good, helps with creativity and makes the DMs job easier. 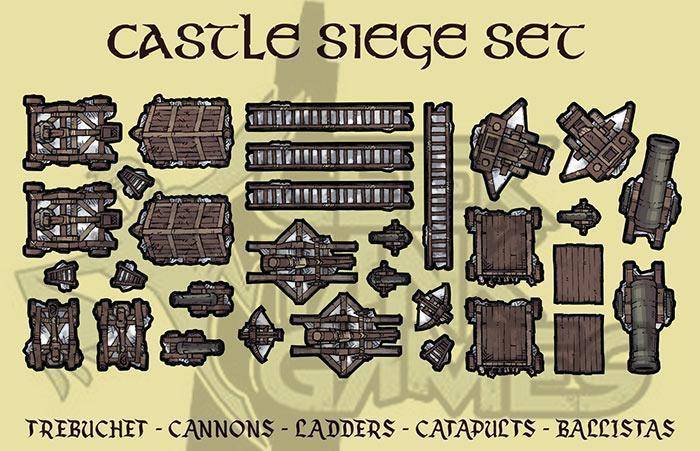 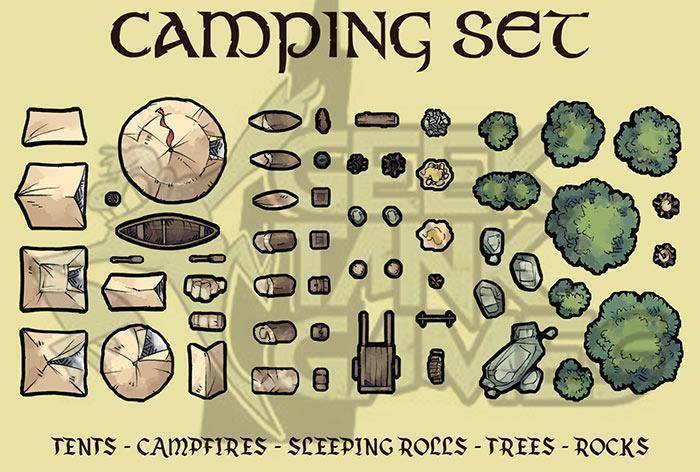 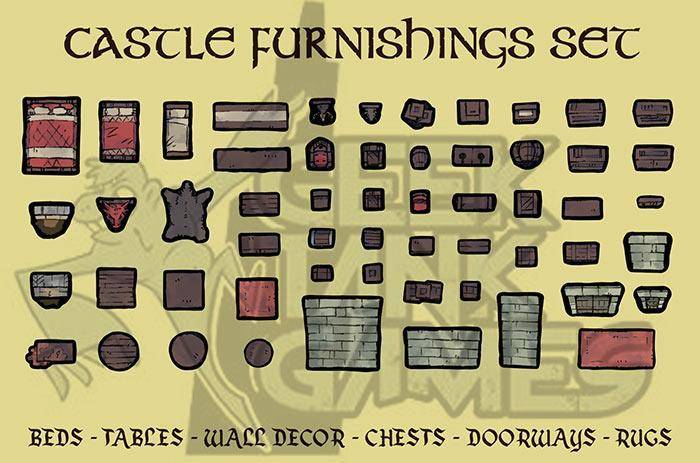 As far as their construction, the tokens are made from plastic so they are waterproof.  Art is printed on both sides for easy placement. They’re also pretty hard to bend or crease, so as long as you don’t put too much weight on top of them when they’re in your gaming bag no worries.  Also, because they aren’t made from cardboard like tokens of old the corners won’t wear and they won’t fall apart.  Some of my old token/tile sets sure are showing their age, with one tile in particular in possession of a serious wine stain.  Advancements in manufacturing allow for products like this to serve their purpose for the long haul, and Geek Tank Games has built tokens that were made to last.  I already can’t wait for new sets to come out!  Token sets are one of those things that even a player could pick up, to either help out their DM by spreading out the expense of gaming across the table or perhaps as a gift to your favorite DM come birthdays or holidays.

So, after one random tweet from a company I hadn’t yet heard of came not just an article topic, but some great new DM gear for my sessions.  My players have already given me some kudos thanks to Geek Tank Games.  Their Kickstarter launches Feb 7th, check it out and if you can support a company that wants to supply you with quality tokens to help make your next session that much more vivid.  Until next time, I’m off to perform an exorcism on my dice bag…..

For more information on Geek Take Games’ TableTop Tokens check out their website, twitter for info about their upcoming Kickstarter!

Moira MacTaggert Won’t Be In X-Men: Dark Phoenix Watch Out For HELL’S KITTY!