Remember earlier this year when the San Francisco dwelling that the Tanner family was said to inhabit suddenly went for sale? Since it was in the most over-inflated housing market in the country, it carried a price tag of $4.15 million. Who would be able to pony up that cash? 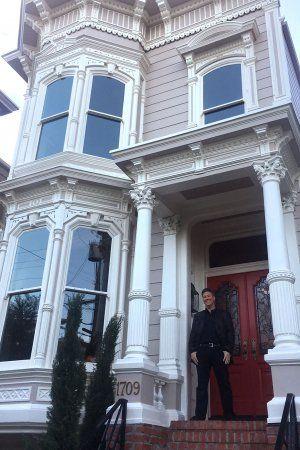 Jeff Franklin, the creator of Full House, could. He is now the owner of 1709 Broderick St. and he couldn’t be happier. “The house came on the market and really, I just thought, I have to buy this house,” Franklin said to THR. “I’m so sentimental about the house. It’s great to have the house in our Full House family and be able to preserve it for the fans. … Seriously, I love owning this house.” I think he likes the house.

1709 Broderick was built back in 1883 and has not had any structural improvements since then — living in such an earthquake-prone area, it’s a miracle it has survived THIS long. The house will need six months of remodeling work and a seismic retrofit to bring it up to current SanFran code. The innards look nothing like the Full House set, but Franklin would like to change that as well. His first step was to repaint the door red; its past owners changed the color to green.

Franklin is probably the best choice for ownership of a place like this. Past owners of 1709 Broderick have been using it as a legitimate place to live and have been annoyed with the constant visits from tourists. It is best turned into a museum devoted to 80’s and 90’s sitcom kitsch. Franklin hasn’t announced those exact plans yet, but now that he’s filming Fuller House, he wants to use 1709 Broderick to create the first-ever sequence where the Tanners actually stand outside and then go inside — an impossibility until now.