Please switch on captions for the English subs
​
Kinda surprised we hadn't made one of these already. So the next Ultraman series is "Ultraman Z" (that's pronounced "Zed" in the British English way, not with an American English "Zee"). The show is due to start on June 20th 2020.

The show's opening theme is being sung by Masaaki Endoh, who toku fans may recognize as the singer of the Abaranger opening theme, as well as being a part of JAM Project who produce most of the songs for the Garo franchise. The show's end theme will be performed by Nami Tamaki, who sang the opening theme for Mobile Suit Gundam SEED. 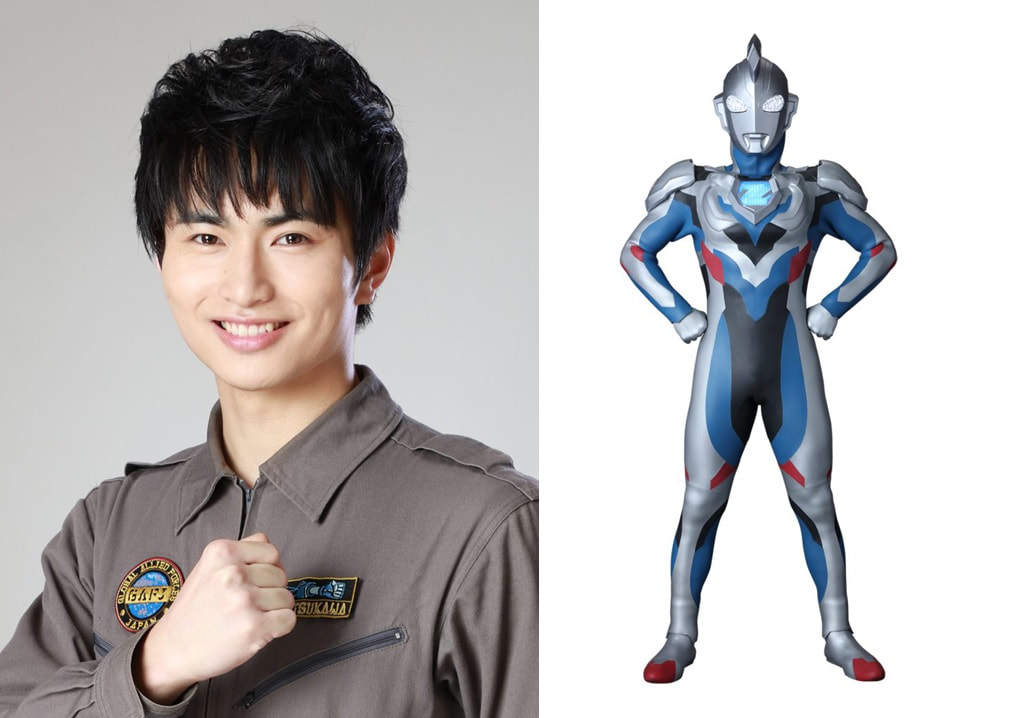 Z is the pupil of Ultraman Zero (since it was his 10th anniversary last year), who ends up merging with a human called Haruki Natsukawa, a hot-blooded karate master who is a member of the Earth defense force STORAGE. 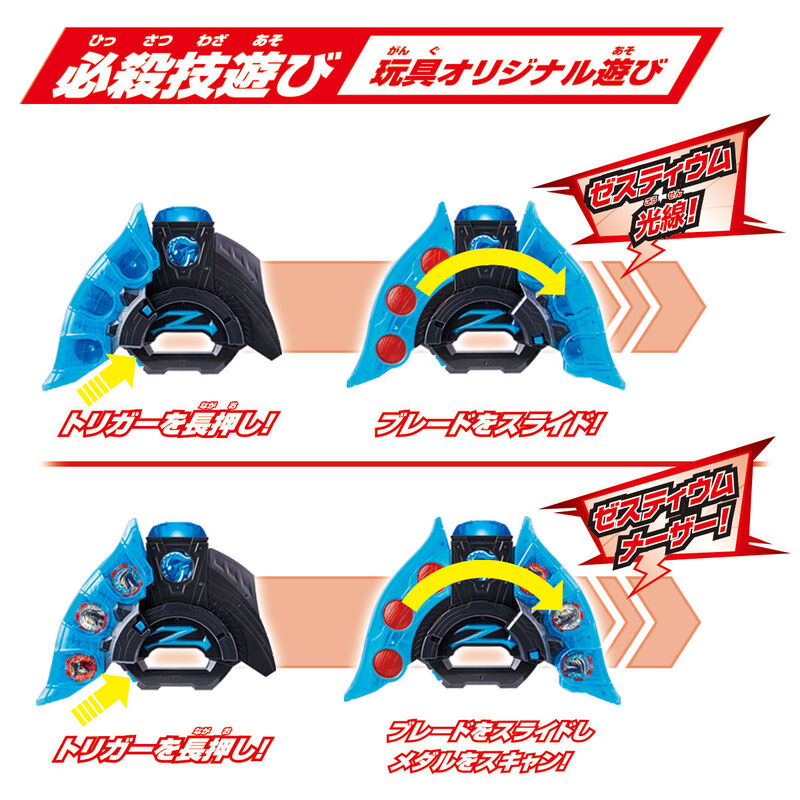 ​
Haruki will transform into Z using the Ultra Z Riser, which uses both cards AND medals. As you can hopefully see above, the right-hand blue "wing" is initially on the left on top of the other wing. You first insert a card in the center to tell the device which character is transforming. Then you load three medals into that wing, press a button to start the scanner, then rotate the wing over to the right and it will scan the medals as they pass over the central card area. The combination of medals used determines which form the Ultraman becomes. 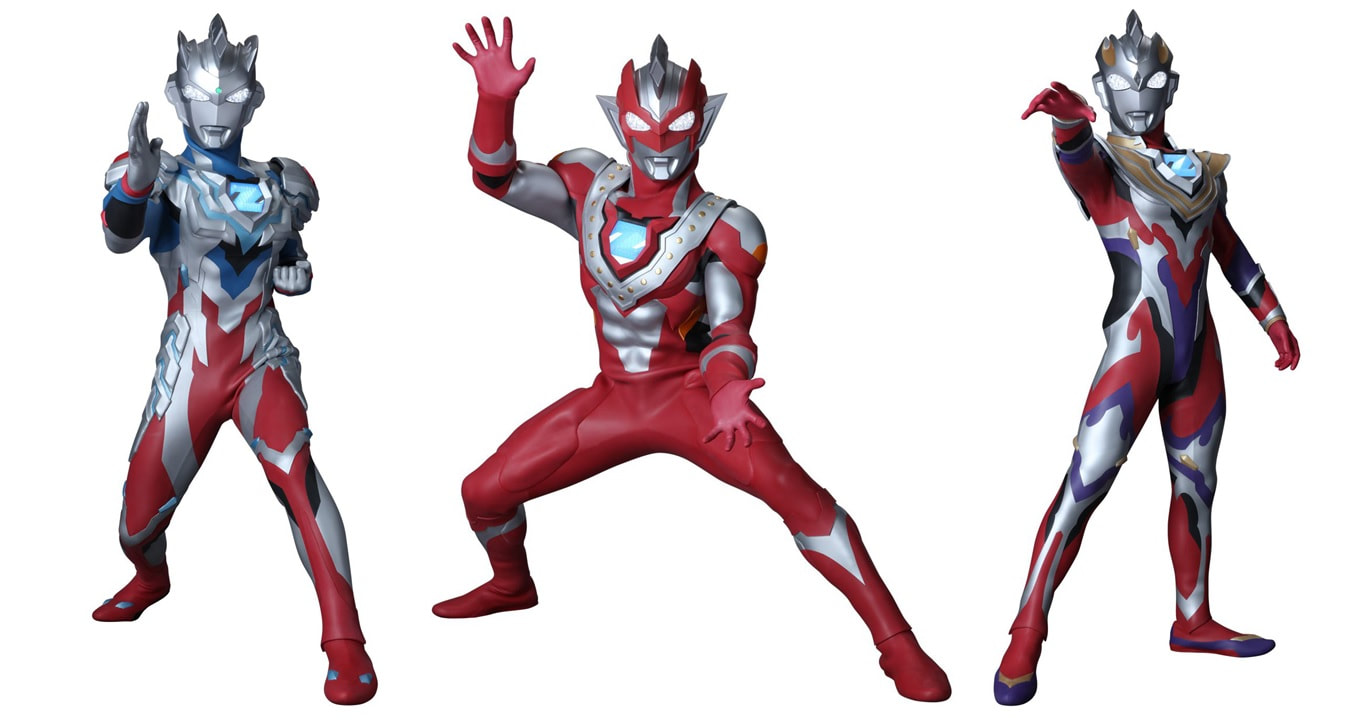 ​
Ultraman Z's three initial forms are (from left to right in the image above):

Ultraman Z Alpha Edge. This uses the medals for Ultra Seven, Ultraman Leo, and Ultraman Zero. This represents a certain lineage within the Ultra series, as Ultra Seven was the mentor of Leo, who in turn trained Zero, who is now the mentor for Z.

Ultraman Z Beta Smash. Formed from the medals for the original Ultraman, Ultraman Ace, and Ultraman Taro. Representing another lineage, as these are all Ultra Brothers, and also specialized in fighting techniques derived from pro-wrestling. Yes, he does look a bit like Redman for some reason.

​
Finally, they have confirmed that Riku/Ultrman Geed will be returning in this series. Riku will not be using his Geed Riser, but will instead begin using a Z Riser along with the medals for Ginga, X, and Orb. This will grant him a new form called Ultraman Geed Galaxy Rising. And yes, I guess he's there to justify having cards as well as medals.

So it's pretty much Ultraman OOO? I'm pretty sure it's pronounced "Zetto."

Anyway, I don't see anything special about it in the trailer. It looks like another modern Ultraman series. Not that there is anything wrong with it, but I'm tired of seeing all of these Ultraman utilize the powers of older Ultras. It was fine for a couple of years, but now it feels like a crutch for the franchise. I guess if Tsuburaya decides to stream this one for once while it airs I'll watch it, but if not, I'll just wait for Mill Creek to bring it out on BD before I see it. 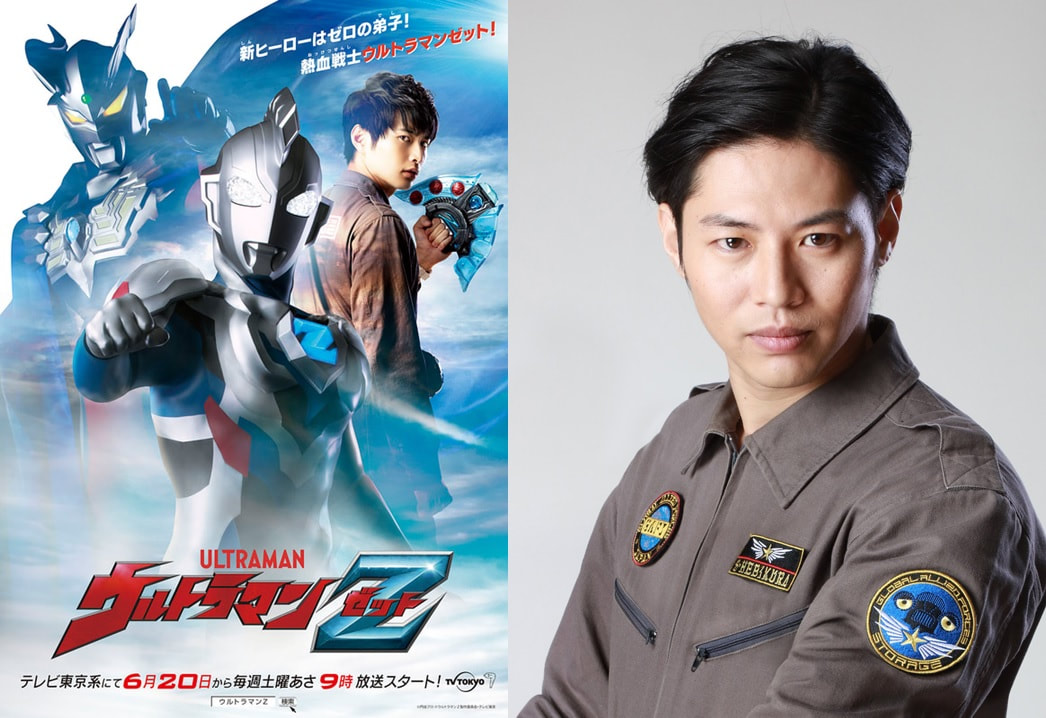 ​
On the right is a newly-announced character called Shouta Hebikura, who is the captain of the new show's defense team, STORAGE. If he seems familiar, that's because he's played by Takaya Aoyagi, who previously played Orb's best frenemy Juggulus Juggler.

Dr Kain said:
So it's pretty much Ultraman OOO?
Click to expand...

Yeah it seems like a much less elegant OOO Driver, but it's also got a card reader attached to try and milk the kids for two gimmicks at once.

I'm pretty sure it's pronounced "Zetto."
Click to expand...

Wasn't that the Kamen Rider that appeared between Shin and J?

It was just announced that Tsuburaya will be simulstreaming Z on their YouTube channel in the US.

Shiver as you hear my ROAR!!!

Glad they're back to doing the official English subtitles!

It was a decent first episode. I haven't paid attention to anything revolving around the show, so I had no idea what to expect. I also recently learned the head writer died, so that sucks. I find it interesting that Sevenger looks like a retooled King Joe costume. Maybe they'll do something with that later on in the season? Hmmmmmmmmmmmmmmm...

I do find it funny that yet again Zero got beat up and knocked away in the first episode. I kind of want to take that scene and put Willy's "Ugh, I'm pretty bad at this," line from the Treehouse of Horror episode of The Simpsons.

I did like it when Z was telling the main dude (don't have his name memorized yet) to put more spirit into saying "ULtraman Z" along with when he was standing there and Z whispered for him to hit the button. Another cool bit was the camera work of the dude running from Baby Gomess from his eye level.

On the other hand, the gimmick seems too much like the one from Kamen Rider OOOs. All I wanted to hear was a deep voice screaming, "Zero, Seven, Leo... ZeSeLe ZESELE."

The commander dude is totally the villain we saw holding the medals in his hand.

Dr Kain said:
I find it interesting that Sevenger looks like a retooled King Joe costume.
Click to expand...

I don't know about this particular suit, but Sevenger itself is an old school design originally from an episode of Ultraman Leo. In that episode, Ultraman Jack brings it to Earth to give to UltraSeven, as a new addition to his little team of capsule monsters. But Seven hardly ever used the capsule monsters in his own series, never mind in Leo, so Sevenger never appeared again after the episode introducing him. Explains the name though.

Funnily enough, another of Seven's capsule monsters, Windam, is in the opening credits for this series. He's posing alongside the team in that title shot. So I'm guessing that we might see Windam added as an additional mecha at some point?

I do find it funny that yet again Zero got beat up and knocked away in the first episode. I kind of want to take that scene and put Willy's "Ugh, I'm pretty bad at this," line from the Treehouse of Horror episode of The Simpsons.
Click to expand...

Given that he clearly didn't want Z as his pupil, that seemed very much like Zero going "Oh look, a chance to get away from this guy?! Peace out mf'ers!"

The commander dude is totally the villain we saw holding the medals in his hand.
Click to expand...

Which commander dude? The general dude played by the shop-owner from KR Wizard? Or the day-to-day team captain dude? The team captain is the actor who previously played Jugglus Juggler in Ultraman Orb. So yeah, a lot of people are expecting the "stunning twist" that he's actually the same character returned.

Or at the very least, there will probably be a "you remind me of someone" type line. They've announced that Riku/Geed will appear in this series, and IIRC he met Jugglus in their crossover movie. Of course, Riku's actor had one of those moments himself, due to the actor having played another character in Zero's own movies.

Toku Prime said:
I don't know about this particular suit, but Sevenger itself is an old school design originally from an episode of Ultraman Leo. In that episode,
Click to expand...

I totally forgot Sevenger was in Leo. Most of Leo is a blank to me outside of the forced grim dark crap and Dan being a complete and total douchebag.

The one who mysteriously said he had to run to the bathroom and then we see someone's body holding coins. That's totally that dude.

Dr Kain said:
I totally forgot Sevenger was in Leo. Most of Leo is a blank to me outside of the forced grim dark crap and Dan being a complete and total douchebag.
Click to expand...

Oh yeah I only had a vague sense that I'd seen it somewhere before and had to look it up. I have similar thoughts when it comes to Leo. Seven is the biggest villain in that series.

The one who mysteriously said he had to run to the bathroom and then we see someone's body holding coins. That's totally that dude.
Click to expand...

Yeah, the guy who "ran to the bathroom" is played by the guy who was previously (or is???) Jugglus Juggler in Orb.

Just a little heads up. Apparently each episode will only be on the youtube channel for two weeks before being removed. So if anyone was intending to let the episodes build up and then binge them, you'll have to change your plans and switch to weekly viewing with the rest of us.

Yep, which was lame.

Toku Prime said:
Just a little heads up. Apparently each episode will only be on the youtube channel for two weeks before being removed. So if anyone was intending to let the episodes build up and then binge them, you'll have to change your plans and switch to weekly viewing with the rest of us.
Click to expand...

Episode 2 was another solid episode.

We get to know a bit more about Haruki and the rest of team STORAGE, Haruki is a likable protagonist who works hard because he wants improve himself to protect others, Yoko is the tough girl who challenges any guy who wants to date to an arm wrestling match but she has a cheerful demeanor especially around older men who she swoons over particularly head of the maintenance team at STORAGE Kojiro Inaba. Chief Hebikura is a tough commandor who clearly cares for his team especially Haruki but judging by their hand to hand combat sparring, he doesn't go easy on him however he leaves some words of wisdom that actually helped Haruki deal with this episode's monster of the week, which was beast that can become invisible and absorb electricity. Yuka is the scientist who works on the gadgets and weapons and seems she wants to prove her inventions are the best.

I like how the show explains that the transformation device has a barrier around it making Haruki the only one who can see it. I also like that the idea that Z creates a doorway that Haruki can walk through so they can interact, it's a pretty different way of doing the classic Ultra and host interactions. Though I'm not sure how I feel about the idea that both host and Ultra have to be motivated to combine.

Also the episode pulls a Superman/Clark Kent/Lois Lane love triangle at the end where we discover Yoko seems to have a crush on Z after he saved her and after she found out he's over 5,000 years old (and that's the age of a rookie Ultra)

It seems Tsuburaya has re-uploaded episode one to their youtube channel, marked as a "special transmission." No word as to whether this is permanent or if they're just giving it another two weeks. I did notice that the episode length is slightly shorter than I recall, so either they've changed the ads or it's been edited in some way.
You must log in or register to reply here.
Share:
Facebook Twitter Reddit Pinterest Tumblr WhatsApp Email Link