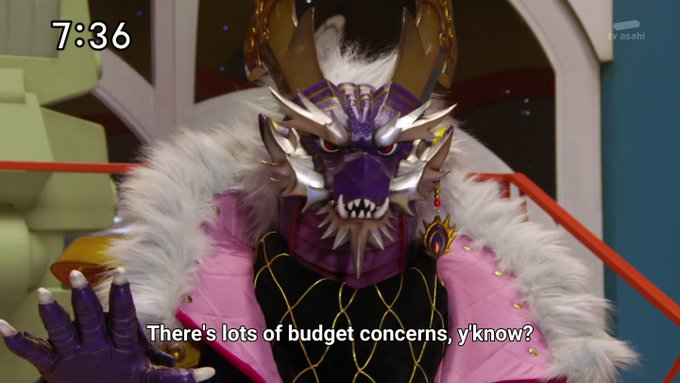 Do you have any idea what the dry cleaning costs are like for a bitchin' pimp coat like this?​
Well, I suspect this one will disappoint a few people. After just three episodes in space, the Kyurangers land on Earth with a setup that could conceivably keep them there for the rest of the series. Even worse, the planet's already been conquered so I guess Sentai continuity fans have to presume that the 40 previous Sentai have all been defeated. But on the bright side, it seems that Snack Safari (Sun Vulcan's hang-out that was also visited a couple of times by the Gokaigers) is still in business.

Yeah I'm disappointed the Kyurangers are already on Earth, and the episode says that there are multiple "generals" aka monsters of the week on this planet. Basically a plot device to keep them on Earth, for who knows how long. Really wanted them to travel to fictional planets and save Earth for the final arc or the movies, it would of been better. But instead the tradition of Sentai saving Earth continues even for a Space Sentai.

The episode depicted Earth as post-apocalyptic, and since I'm a supporter of the linear main Sentai timeline, Gorenger - Gokaiger was all connected to each other. Nothing from Go-Busters - Toqger implied that it was in its own alternate timeline. While Ninninger - Zyuohger once again canon the Legend Sentai and even Metal Hero shows together. So I'm just gonna say that Jark Matter really did conquer Earth in the future defeating all 40 Sentai. But at this point I don't think Toei cares about continuity like really how many damn villains are to challenge Earth and why won't the other heroes help? Doesn't make sense using logically.

^ I'd think that that alone would refute your argument that all Sentais are in one universe. The three dinosaur Sentais alone explain the dinosaurs' extinction in conflicting ways.