is Mayor of Farmville

Plot: Enetron. It is a mysterious, yet widely available power source deemed cleaner and more plentiful the fossil fuels once used to power civilization. Nowadays, many homes and businesses rely on the energy, much so that an organization has been created to not only research, but also manage the strange new source. This organization is called the Enetron Research Center, or ERC. Because of their vital role in society, the utmost in talent for both the scientific research, to security, is selected. All in all, the Agency maintaned the utmost security, all the way down to the computers, which are constantly monitored and updated to the most advanced protection ever. However, for all the protection used to keep Enetron flowing, there is always the clear and present danger lurking in the shadows, and one strike from such dangers could prove disastrous.

Needless to say, such a strike occurred one night, when a virus hit one of the computers managing the Enetron flow. As such, the virus, making contact with Enetron, began to develop into a sentient being -- a sentient, yet evil being -- which then began to assault the ERC base, causing the plant to go haywire, trapping many researchers and security personnel inside. Fearing that the virus may use the Enetron Pipelines to spread to the rest of the city, made a last ditch attempt to transport the infected facility to an unforgiving dimension known as Hyperspace, managing to successfully trap the evil virus.

Since that incident, the ERC has built new facilities to process and distribute the Enetron. Yet the higher-ups at the ERC were aware that the Virus not only is alive and well in Hyperspace, but has also sent down "avatars", which act as agents, to gather Enetron, which will allow it to come back and wreak havoc in the city. Wanting to prevent such a catastrophe, the ERC has developed a strike force of three skilled operatives injected with a special vaccine that enhance their abilities to counter the threat of the virus, named "LINK". The trio are then called: Go-busters.


1) No God-modding (except for villains -- seek my permission to do so)
2) If you are unable to roleplay your chara, ask someone else to cover for you
3) Pay attention to posts
4) Bios are required, and no reservations allowed. Bios must be at least one paragraph long.
5) Try to not leave people behind and don't rush the plot
6) Conflicts between members are to be settled outside the RPG
7) Have fun!

Morphin Brace: Standard Henshin device for the team, which allows them to don the suits, as well as the visors. The Henshin call is "Let's Morphin'".

Transpod: Allows the team to access their weapons, which are stored at Base. Also acts as a voice changer.

Ichigan Buster: A Digital Single-lens reflex camera that doubles as a beam gun for the team.

Sougan Blade: A pair of binoculars that doubles as a sword.

Morphin Blaster: The Henshin device used by the secondary Go-Busters team, which also serves as a Beam-gun sidearm after their transformation is complete.

DriBlade: The Blade weapons of the secondary team. Also doubles as the driving mechanisms for their buster machines.

CB-01 Cheetah: Red Buster's mecha, which Buddyroid Cheeda Nick combines with to form the mech's steering mechanism. It's Vehicle mode is of a Supercar, while it's animal form is of a cheetah. It is the only mech that can transform into Megazord mode on its own.

GT-02 Gorilla: Blue Buster's Mech, which Buddyroid Gorisaki Banana combines with to form its steering mechanism. It's vehicle form is of a truck, while its animal form is of a gorilla with brute strength

RH-03 Rabbit: Yellow Buster's mech, which Buddyroid Usada Lettuce combines with to form its steering mechanism -- a pair of flight sticks. Its vehicle form is of a Helicopter, while its animal form is of a rabbit with extreme jumping ability.

BC-04 Beetle: Beet Buster's Mech. It's vehicle form is of a Crane, while its animal form is of a Scarab beetle that can siphon Enetron.

SJ-05 Stag Beetle: Stag Buster's mech. Its vehicle form is of a jet that sits on BC-04 Crane until activated, while its animal form is of a Stag Beetle, also designed to siphon Enetron. 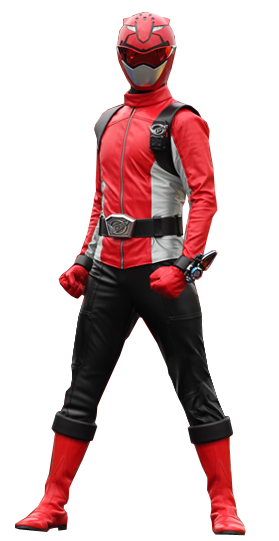 Bio: Though he bears a cute, effeminate face, Scott Coulson's personality is anything but. A quiet, aloof individual, Scott isn't much for small talk or conversation, instead choosing to sit by himself and read, or watch television, preferably the news channels. However, looks can be deceiving, as his stony expression and aloof demeanor doesn't necessarily mean he is a cold individual; rather, he has a select few friends he opens up to, most notably his teammates at ERC. His affiliation with the organization, however, has been for far longer.

Little do most people associated with him know, that Scott wasn't always quiet and aloof; rather, he was once an energetic and happy child. His father, who worked for ERC as head of security at the research and processing facility, took him there every now and then. The research facility, while not really an appropriate place to act as a playground, essentially became Scott's playground, with the researchers taking time off their work to raise the kid collectively along with Scott's father. Scott would often find joy in performing safe experiments that the researchers would cook up, from simple science stuff, to cool tricks people can do with Enetron. All in all, Scott began to consider the entire facility staff as his family -- a family that would be tragically separated from him.

At around the time the Virus gained sentience and launched an assault at the research facility, Scott was playing with one of the researchers, building a small toy powered by a small Enetron battery. Because he was but a child at the time, Scott would not hesitate to express his fear when systems began to go haywire. Though just as fearful, the researcher took Scott by the hand, and began running through the maze of corridors in order to get to the other researchers, as well as the head of security. As he ran along the way, Scott witnessed the horror of Buglers emerging from the power sockets lining the walls of the building, cutting down anyone and everyone they could get their hands on. Though managing to hook up with the researchers, Scott and the others found themselves cornered by the Virus's henchmen -- the point where the researchers implemented their hail mary play of sending the entire facility to Hyperspace. However, before doing so, Scott was instructed by his father to follow one of his friends at security to safety. It would be the last time Scott would ever see his father, as well as the friendly researchers that taught him a lot.

Years have passed, and Scott has grown up from the once happy child into a quiet, aloof individual that people who know him recognize. He currently works security at one of ERC's newer facilities, hoping to prevent the same attack from occurring. He would find that same opportunity when ERC called him in for a meeting. It was at this meeting that he would learn about the new research team discovering that the Virus, now known as LINK, was not only alive and well in hyperspace, but has created avatar agents that would not only mount an assault against them, but also gather enough Enetron so that LINK would be able to cross over to their realm once more. However, he would also learn that he's been selected to become part of a Strike Response team developed by ERC to not only defend the Enetron supply, but also the city itself, from LINK's attacks, which he would learn is called Go-Busters. Scott accepted his promotion into the new Strike force, hoping not only to protect the city, but also avenge his father, as well as the researchers that played with him back then.
You must log in or register to reply here.