Comics The silliest superhero/villian you can think of?

I don't want to sound like I am hating on DC comics, because they have some good books/shows/movies, but their line-up of baddies just seem silly to me. A clown, gorilla, scarecrow and walking submarine just aren't good villains in my book. Of course, Marvel hasn't always hot homeruns on characters either. I feel Kraven, the Beetle, and Screwball are some of the worst creations in it's line. Who would rate at your top as the silliest characters?

I'd have to say Madam Fatal. She's a little old lady who punches bad guys. I remember reading one of my friend's dad's comics back when I was a kid. Silliest thing I ever read. 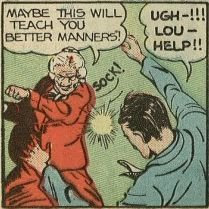 Old ladies as bad guys seems more of the nature of "Johnny Test" or Teen Titans Go!". I did read a comic once where Aunt May was a hero. I believe it was the "What if" series. The Vulture was an elderly villian, yet somehow had the strength to fly and fight?

I tend to like the "silly" characters and I know I'm not the only one. Deadpool is extremely popular as is Spider-Man. The Ventriloquist and Mad Hatter are awesome Batman foes.

Killer clowns are not silly, they are terrifying! There's a difference from a Gorilla as a bad guy (D.C.) and things that are supposed to be fun and innocent, that are deadly. Clowns and toys that come to life are some of the scariest things that anyone could imagine!

primalclaws1974 said:
Killer clowns are not silly, they are terrifying! There's a difference from a Gorilla as a bad guy (D.C.) and things that are supposed to be fun and innocent, that are deadly. Clowns and toys that come to life are some of the scariest things that anyone could imagine!
Click to expand...

I know and its the fact that they are so terrifying that make them such great villains in horror stories. Joker is silly and funny and he is supposed to be. DC has never really tried to take the humor out of the character and I applaud them for that. Too many publishers have tried to make their characters more serious.

In his very first appearance (Showcase #4), the Silver Age Flash--Barry Allen, the fastest man alive!--faced his natural complementary nemesis and opposite: The Moriarty to his Sherlock! The Joker to his Batman! No, I'm not referring to the Reverse Flash who eventually grew into the role. I'm of course referring to The Turtle Man--the slowest man alive! Seriously, the slowest man alive. In retrospect, the Silver Age of Comics was kind of, well... silly.

Check out Linkara's Atop the Fourth Wall episode relating this silly battle of opposites.

Kitty, I respect your opinion, but DC seems outdated compared to Marvel. I do watch the animated movies usually starring Superman, Batman or Green Lantern, but I rarely watch the live-action movies.

Staying with this thread, Paste Pot Pete always made me laugh in the Marvel Universe. He was usually pitted against Spider-Man, and sometimes beat him! The guy had no powers, just a tank of paste that fired paste balls from a hose. The balls would splatter and harden instantly, trapping his enemies.

Putting aside a preference for one of the big two over the other (I'm a DC fan, especiallyVertigo and Batman, but also enjoy Marvel, especially Spiderman and X-Men): I actually think that DC and Marvel are both more or less on par with regards to the quality of their villains, on both the silly and the serious extremes.

DC's rogues gallery may include the likes of the Penny Pincher, Crazy Quilt, Killer Moth, The Condiment King, Maxie Zeus, Mister Mxyzptlk, Granny Goodness, the Turtle Man, The Toy Maker, Egg Fu, and multiple gorillas--but it also includes the ah Guhls and their League of Assassins, Vandal Savage, Black Adam, T.O. Morrow, Sivana, Deathstroke, Two-Face, the Reverse Flash, Darksied, Despero, Mogo, Anton Arcane, Lex Luthor, General Zod, Bane, The Court of Owls, Hugo Strange, Sinestro, the Man-Hunters, the Anti-Monitor, Krona, and Earth-3's Crime Syndicate. (Incidentally, I consider The Joker and Scarecrow to be fantastic villains--but that's a whole other post on a rather subjective subject. Go beyond the surface level of the character's appearance and consider stories like Death and the Family, The Killing Joke, The Man Who Laughs, Gone Sane, and Terror. The Joker may be a clown, but he represents the horrors of a truly chaotic, insane psychopath--and quite honestly Marvel's Cletus Kasady was a rather late-to-the-game imitation with the clown motif replaced by a blood red symbiote. The Scarecrow might wear a silly costume, but he and his fear inducing gas meant to represent facing and overcome one's greatest fears.)

Similarly, Marvel''s rouges gallery may include the likes of The Big Wheel, The Rhino, The Walrus, The Mole-Men, Arcade, and the Hypo-Hustler--but it also includes Magneto, Hydra, The Red Skull, The Green Goblin, Carnage, Thanos, Apocalypse, The Sentinels, Loki, Ultron, and Doctor Doom.

I would also extend that same on par in terms of silliness and seriousness sentiment to DC's and Marvel's roster of heroes.

As for DC being outdated compared to Marvel, I totally agree--during The Silver Age of Comics, when Marvel brought back and revolutionized superhero comics. However, by the eighties DC overtook Marvel in terms of writing--especially with respect to the titles written by the likes of Moore, Gaiman, Delano, Grell, and Morrison. Conversely, Marvel and Image put a greater emphasis on the art, especially during the nineties. Today, I would still give the edge to DC but they're closer to being on par than ever. Granted, this is all just my own personal subjective opinion.
You must log in or register to reply here.
Share:
Facebook Twitter Reddit Pinterest Tumblr WhatsApp Email Share Link