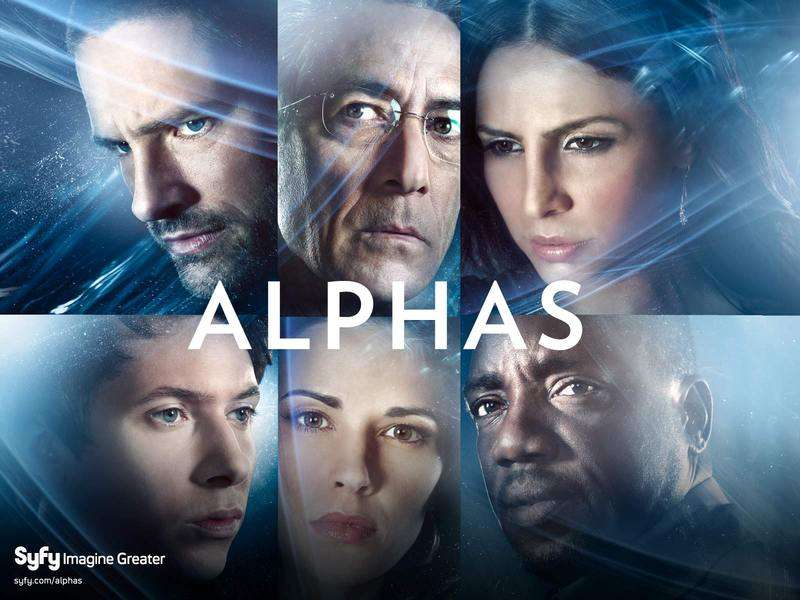 New series on the Syfy channel

Alphas is an action-packed thriller from writers Zak Penn (The Avengers, X-Men: The Last Stand) and Michael Karnow. In the series, five ordinary people are brought together to form one extraordinary team of Alphas -- people with the unique power to stretch the capabilities of the human mind giving them superhuman physical and mental abilities.

Operating within the Defense Criminal Investigation Service of the U.S. Department of Defense and led by preeminent neurologist and psychiatrist Dr. Lee Rosen (Emmy Award-winner and Academy Award-nominee David Strathairn), an expert in Alpha phenomena, the team investigates cases that point to others with Alpha abilities. As they work against the clock to solve this new brand of crime, they must prevent their own personality differences and disparate backgrounds from interfering with their ultimate mission to catch the enemy.

Alphas are ordinary people with extraordinary abilities. Impossible is what they do best. Doctor Rosen has observed Alphas in the following categories:

Hyperadrenal Alphas possess extraordinary physical abilities that are activated by elevated levels of adrenaline. When hyperadrenals are in the "zone" they have high thresholds for pain and are unstoppable, but when the adrenaline rush ends, they become listless and physically drained.

Transducer Alphas are human antennas that possess the ability to intercept communications and encrypted messages with their minds.

For Hyperkinetic Alphas, the mind's imaging systems and muscle control are perfectly in tune with the motor skills center of the brain. Hyperkinetics possesses flawless aim, perfect balance, and greatly enhanced motor skills.

Synesthete Alphas are able to enhance one of their five senses, such as sight or hearing, while rendering the remaining senses temporarily useless - often leaving them vulnerable to danger.

Influencer Alphas disrupt other people's abilities to make decisions. Influencer/Pushers use mental weakness as an opportunity to get what they want in any situation.
Click to expand...

Preview of the first episode is now available on the site. Series premiere on July 11th @ 10/9c

Looks interesting. Always been a big fan of Science Fiction, so I will definitely be trying this

I love these original Syfy shows. I might take a gander at this show. Now I jsut gotta wait until July for Eureka to start back up...
S

Synch said:
its on syfy so it will be dead with in 5 episodes
Click to expand...

What? These type of show tends to do well on Syfy. If it was NBC or ABC, I would agree with you. But I think it'll do well.

So is anyone watching this? I just saw the first episode, and I gotta say it's pretty good. The Syfy shows like Eureka, Warehouse 13, and Sanctuary are some of my favorite shows. Especially Eureka. Love the show. This type of show is meant to be on Syfy. I don't see it getting canceled.
K

I'll check this out.

You would think SyFy would have these up on their site by now. Why are they being stingy? lol and God forbid SyFy shows repeats.

I love the concept of their powers not being very obvious yet still be very ingenious.

Kivat, aren't you glad you saw this thread? This show is pretty awesome. Gary's ability is one of my favorites.
K

DoGu said:
Kivat, aren't you glad you saw this thread? This show is pretty awesome. Gary's ability is one of my favorites.
Click to expand...

I really am. This show is brilliant..almost like an American Misfits. I love Gary a lot because his actor portrays him so well. Last night I was watching interviews for Alphas and it seems his actor is british..Only God knows how much respect I have for someone who can hide they're accent so incredibly well.

DoGu said:
Kivat, aren't you glad you saw this thread? This show is pretty awesome. Gary's ability is one of my favorites.
Click to expand...

Yeah, Gary is shaping up to be like what Dr. Bishop is in Fringe. The socially-challenged yet adorable character.

And yes, I've seen that interview too and was surprised how much class the actor of Gary actually has. :buttrock:
K

musashi03 said:
And yes, I've seen that interview too and was surprised how much class the actor of Gary actually has. :buttrock:
Click to expand...

Which makes him that much greater an actor.

lol I don't watch interviews for anything, I have to really like it for me to snoop around behind the scenes.
K

Gary's sudden rebellion was a cool twist in development. He was saying the funniest **** also. "You sound like the girl in my voicemail.." LOL

That autistic girl who understands all languages was great. Her actor looks really really familiar. Is it odd I found kinda cute? As the episode went on that is..when she started talking.

Been watching this show online because I could never catch it on TV. Great show, and Gary and Bill are my favorite characters. It would be crazy to see wifi and cellphone signals, but being able to boost your strength (almost) whenever is something I've always dream of.

I loved the episode. Gary is shaping up to be my favorite character in the show, and I'm lovin it. Yeah the girl pretty much acted great in the beginning, but when she was finally revealing her true identity to Gary, her acting sorta fell apart. She became a bit predictable by then unlike in the beginning where you really see her as someone who has autism.
U