Quality issues aside (since it's already stated the Ghost figuarts has issues with articulation), yes exactly. Im not sure what they're gonna make figuarts out of for the remainder of the Ghost retail slot. There isn't that many characters or forms people care about.

Tendou Soujiro said:
we're getting two versions of Type Tridoron and they're both exclusives. I honestly can't understand why the version that doesn't have any additional accessories couldn't have been sold at mass retail.
Click to expand...

THIS. Seriously, this. I've been holding out on buying other Figuarts solely for this guy, and they had to make him an exclusive :sweat:
Not sure if this has been asked before, do they have some kind of a limit on how many retails or exclusives they can release in one month (or any other length of period for that matter)?
T

Ghost's line is not so obvious. There's like 3 or 4 confirmed retail, and Drive at least had 7. I'm not sure as to why someone like necrom is an exclusive, since he's the only other rider. The line better not consist of villains/Ganmizers :/

Considering how many Rider forms exist in Ghost, I strongly doubt the thought of villains and Ganmeizers will even cross their minds. There are so many Ghost forms to cover and the most recent confirmed releases are Deep Specter and Grateful. This is incredibly concerning for guys like me who just really enjoy Ghost's alternate forms.

I'm actually not surprised Necrom is an exclusive because he's in the exact same position as Chaser. Not saying that justifies it at all, but I expected nothing less.
T

Those two are exclusives, which makes me question the popularity of Kamen Rider Ghost :/

The only thing that bothers me is that what're they gonna use for the rest of the Ghost line? I guess their plan is to have people just buy Ghost, Specter, and Boost. 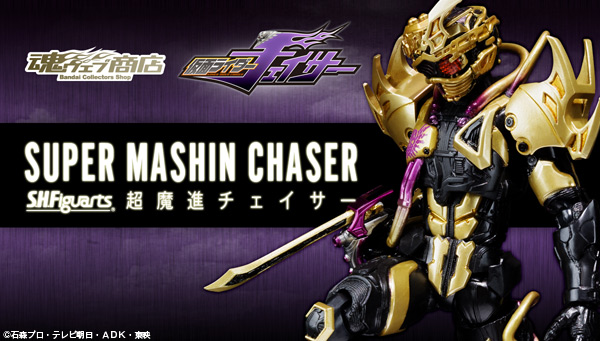 Honestly was expecting it because it's another remold of Machine Chaser. It's just too convenient; similar to how we have Super Dead Heat Drive but absolutely no sign of Type Special or Type Next.

New photos of upcoming figuarts at another event

The Han Solo figure came out looking much better than the Luke Skywalker figure. Kylo Ren too.
D

It's been a long time since I did anything with my Kamen Rider Figuarts, so I spent the last two hours taking these:

Dr Kain said:
It's been a long time since I did anything with my Kamen Rider Figuarts, so I spent the last two hours taking these:

Woohoo! I'm happy to see activity on this thread. I visit toyark/tokunation, but I don't have accounts there.

If anyone still cares here. Tamashii 2016 is starting up and going till Sunday. Hall of armor is coming too!


Both are Web exclusive but bluefin will distribute a special Iron Man and Hall of armor set will be sold for U.S market for $119 dollars

I really shouldn't have done this, but after 2 years of resisting let's a go:

Man, I feel like these guys are plastic crack because I need more. I need lots of Set A and maybe 1 more Set B while of course getting the others. I also think I'm going to have to buy at least 3 of D and E, but I'm going to see if they go on sale at all over the next month before doing so. The same goes for Fire Mario (who is for some reason $15 higher than regular Mario even though he is a repaint), Yoshi, and Bowser.

I guess I gotta go hunt down the Jakks Peach and Toad though since it seems like Bandai won't be doing them, which is a shame. Thankfully they can go great with all of my other video game guys even if the main cast is never completed.

However, I do feel there are a little big of negatives with them as Mario and Luigi don't feel as posseable as they should be. At least in their arms as their range of motion is really limited.

Oh, and the B&N I went to (about 45 minutes away) also had Leonardo and Donetello, which look great, but $63 is way too much. Cut them down by $20 and I'd be willing to get them as long as Shredder and April happen.
D

My initial impressions of him are quite positive. I just can not believe how accurate this figure is to the actual suit. I don't even own the original W anymore, but now I see every flaw that old figure had. On one hand, I love that the USB drives can come out of the belt. On the other, I hate it because they don't lock in, the just slide in, so any time I tilt the figure to switch hands or put him into his kick pose, they fall out. It's very frustrating. That nitpick aside, this figure rocks and is one of the best Kamen Rider Figuarts to date. I can't wait until they get to OOO.

I may do it. I had my first experience with stop motion when I did my Ohranger review. It was simple and only like a few motions of an arm, but I might try it out again at some point with something more advanced. Thanks.
D

So I got this guy today:

Oh, and this came in as well:

As such, I decided to try some stuff out with the green screen and lamps.

And then these three were just done playing while trying out the lights:

So the green screen rocks and I can't wait to use it in my videos. The lamps are going to be fantastic for both videos and pictures.

Now the Ultraman itself is... kind of a let down. Well, it's great, but I've had to put in to have Amazon ship me a replacement because my god, the quality control on my figure sssuuuuuuuuuuucksssssssss! Like Kamen Rider Zx bad.

His joints are extremely loose, so I can't keep him standing up for more than a minute and his elbows are so loose I could barely get him to stay in his finishing move pose long enough to get that shot I did. Hence why that is probably the worst picture of the bunch as I had to take what I could get. The timer is also glue into his chest so I can't even switch it out with the red colored one. Oh, and the plastic inside the Baltan ship hole was never fully cut, so I can't even attach the Tamashii Stand to it. I hope mine is just a one off and this isn't how the whole production was because if it is, this was no where near a $75 toy.
D