Does anyone remember Zoids? When I first saw it on Toonami years ago I was pretty hooked on it. I think I remember my arcade at the closest mall had a game for it and it was pretty sweet.

The Liger Zero (The mecha face of the series) was obviously my favorite mech at the beginning but I started to like the Shadow Fox once it debuted and other Zoids as well.

When Chaotic Century came out, I was kinda skeptical even though it was the actual first series and plot wise it was YEARS before the time of the Zoid Battles. Afterwards though it started to grow on me and when the Shield Liger upgraded to the Blade Liger it became pretty awesome.

I didn't get much into Fuzors, it didn't have the same feel as New Century Zero. And most of the US anime fandom would agree since it was cancelled after 13 eps.

So anyone here liked, hated, etc. the Zoids franchise?

i watch the first 3 series on tv, my favourite has to be the direct sequel to chaotic century (i cant remember if it had its own specific name or not) although i enjoyed new century zero.

fuzors never aired in the UK most likely because of its low ratings in the US and i didnt like the idea of the fusing anyway.

i have also attempted to watch genesis but my interest in it dwindled very quickly.
Last edited: Apr 30, 2010

I'm a big fan of Genobreaker because he has a charged particle cannon:buttrock:

Berserk Fury was okay...but Genobreaker still top the list for me

Zoids Zero was the tournament fights, right? That was some of the best mech fight choreography I've ever seen.

Not much for plot, but fun as hell.

I'm a big fan of Genobreaker because he has a charged particle cannon:buttrock:

yeah genobreaker was awsome but personally i prefered blade liger mainly because it was in my eyes at the time "a big blue sabertoothed cat thing", then i found out what a liger was and loved it even more :buttrock:


Keith Justice said:
Zoids Zero was the tournament fights, right? That was some of the best mech fight choreography I've ever seen.

Not much for plot, but fun as hell.
Click to expand...

yeah i agree, especially some of the coordinate scenes with teams with identicle zoids performing some sort of manouver.

correct me if im wrong but wasnt new century zero an actual sequel to guardian force and liger zero and berserk fury were somehow connected to zeke and the blade liger and genobreaker and shadow?

Since I consider Zoids to be the Gundam of animals (since Zoids is also in the real robot category), I enjoyed a 4 seasons, but never got to Genesis.
W

In descending order of preference:
Zoids Genesis - Enjoyed this the most since it had that "super robot" feel.
Zoids - Story is based on the Zoids Battle Story of the toys.
Zoids Shinseiki/Zero - Liked the tournament setting and the comedy.
Zoids Fuzors - Disliked this for some reason. Fast-forwarded through the dialogue just to get to the action scenes.

Now, count up your crimes!

Oh yeah, the first three shows are great. But Fuzors... was the worst. It was terribly written. You can see why it bombs in the first place. =/

Ah yes, I remember there was a announcement of Zoids Genesis being licensed by Viz. Until Naruto and Bleach decided to become top priority. So much for that. >_>

I never understood Fuzors but the only thing that stood there were the new Zoids and the fusion-like Zoids (Liger Zero Phoenix). XP

Still haven't got to Genesis as well and I feel bad that I didn't buy any Zoids mechs back then. D:

The original anime (which was split into Chaotic Century and Guardian Force) was my favorite. I also loved Zero.

Zoids? It's one of my favorite anime series of all time!
The first two seasons was my favorite: Chotic and Guardian Force.

If I haven't told you before, I'n once a Zoids model kit collector before I switched to toku stuffs.

I am a big fan of Chaotic Century. Blade Liger is still one of my favorite Zoid in the franchise along with Command Wolf.

Man I love zoids, I remember I use to buy the model kits at my local chinatown at the time,sadly I give them away and here is whats left of my collection.

As far as characters goes in the anime series I prefer Van over bit cloud,van has really progress throw the 1st and 2nd seasons and the Blade Liger is just awesome with the upgrade,bit cloud is just a clown but I have to admit his skill improve over time in the series and the Zero Liger is just awesome.:buttrock:

Zoids was one of the pivotal points of my anime life (not that I'm a full blown Otaku...okay, maybe I am an Otaku). It's what got me into collecting. But despite every model kit out there, all I want is... and for some reason... 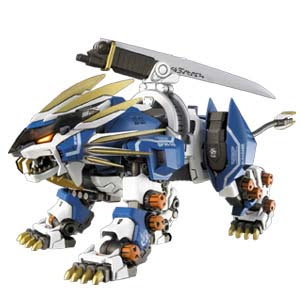 UkiyaSeed said:
I am a big fan of Chaotic Century. Blade Liger is still one of my favorite Zoid in the franchise along with Command Wolf.
Click to expand...

Same here. But sadly, I didn't own one.

For some reason if only Fuzors needs development by the writer. Most I like is Zoids/Zero was the best even my favorite gal Rinon. Genesis is alright more of SRW tamashii vibe.

Reito-sama said:
For some reason if only Fuzors needs development by the writer. Most I like is Zoids/Zero was the best even my favorite gal Rinon. Genesis is alright more of SRW tamashii vibe.
Click to expand...

Well, Fuzors have good designed Zoids. But the plot is meh...

GekiDan said:
Well, Fuzors have good designed Zoids. But the plot is meh...
Click to expand...

I bet it is the worst.

both first until Genesis were finished watch them all it was during 2005. did also played in the game too in Xbox 360. ^.^
You must log in or register to reply here.