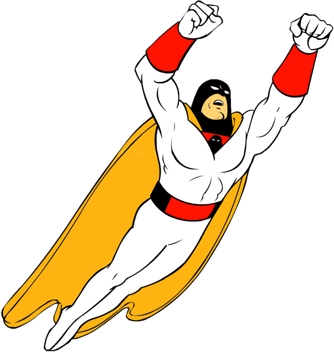 Did Fourze get his own talk show? No he did not!​
So as 'Go Princess Precure' nears it's finale, it seems that Ghost and Specter will carry on their quest to protect the dreams of innocent people. Either that, or the writer has been watching Decade and thought the whole "befriend the person to gain their powers" thing needed dusting off. Maybe both?

But whatever, Fourze reference!

I like seeing the Eyecon actually doing something instead of just being a prize to be fought over.

I hate fourze, so it has zero value on me towards that reference

Oth, is aran a bit more powerful as in his human form or spectre being weak or the choreography seems weak this time ?? Coz honestly i feel it's the latter, the fight with ryoma eyecon was a bit dissapointing too..
A nice change of arc btw, it is surely gonna make things more interesting

- Ryoma has his own table xD

- That TV position on Kanon's room doesn't look comfortable for her.

- How did Makoto knew Onari and Shibuya are there?

- Funny how the father and the son are unfazed by what they are seeing lol. The father didn't even ask anything when Ryoma took control of his son's body xD

- I was hoping O-T changed the translation for Ryoma Eyecon's phrase just like when they changed Benkei's for no reason......turns out this time they didn't.
I'm very sure "Japan" and "hand" doesn't rhyme. I wonder why they kept that translation........
However, "Japan" and "dawn" doesn't exactly rhyme either so they can't use "dawn". Hmm....

Maybe "Rising up, Japan! A new day is coming!" would be a better choice? It also reflects how the rhyme in the Japanese chant is on the first word and the very last word.

- Takeru still forgot he's a ghost xD
On the other hand, he also forgot he's wearing a Rider suit. I'm convinced a Rider suit has always been able to act as a space suit when needed :laugh:

- Huh, just like in the last episode, the "Mega Mabushii" sound comes out before the Boost Eyecon is put inside the weapon. So that was intended after all?

- I like the little detail they put, the part when the episode ended with the biwa sound from Musashi Eyecon's phrase while Musashi appears on screen.

Based on the next episode preview, seems like Kanon is completely oblivious to the fact that Makoto is no longer working for Aran. Yeah, nice job there, Makoto. Don't tell her such an important thing.

Also, another not exactly rhyming translation from O-T, though honestly, just like Ryoma Eyecon's phrase, it's kinda hard to think of a rhyming word.....maybe "Any trick he can, the master magician"?

This episode still has my issues with ghost:
First of all, its like everything someone says has to be a corny speech. Its getting kind of annoying now. The characters don't feel like characters and more like just walking aesops.
And to add on that, the characters to me are bland and don't have much to them. Takeru is the whole pure hero, Akari the smart girl, Onari just a yelling buffon and Makoto is just the stereotypical cool rival.

Photon said:
I'm very sure "Japan" and "hand" doesn't rhyme. I wonder why they kept that translation........
Click to expand...

Well the "an" part is the same so the last sylable works as a rhyme.

Kamen rider sol said:
This episode still has my issues with ghost:
First of all, its like everything someone says has to be a corny speech.
Click to expand...

Remember when Kamen Rider 1 announced how he will protect the freedom humanity no matter the cost.

Or more recently, 80% of everything Kouta ever seems to say (despite never actually living up to what he says lol).

You might I am conflating these examples with your arguement, but I say you are exaggerating the quantity of something that shouldn't at this point be considered a problem anymore and also that has been worse with Gaim.
You must log in or register to reply here.