Someone must've played the Polymerization card.:laugh:

That wouldn't send the right message(in corporate japan's opinion) to children and would never work.

Shirayuki said:
two characters fusing together would make for an epic ultimate power
Click to expand... 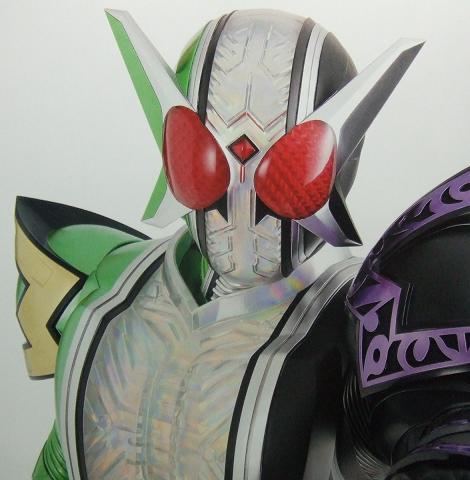 I agree. A toku show about Firestorm would surely be a hit.

Quite, Xtreme really is epic awesomeness. :castlerock:
A

Araki said:
but W was always two characters to begin, its not the same. maybe we'll eventually get a mid-series power up where two characters fuse
Click to expand...

No, W was Shotaro's Body fused with Phillp's Soul, WCJX is when both of their bodies fused together creating a new power.

Everyone always forgets Ultraman Ace when this conversation pops up. :laugh:

And that one's even creepier, because it was a man and a woman! :loltongue:

both of them will show their appearances in a flick of an eye.

You Need A Mint

Can't wait for Kanzen Gokai-Oh to debut. The Go-Ongers gave way to another kickass formation!

Barizorg appeared on Earth, commanding troops composed of Gormin, Sugormin, and the Emperor's personal bodyguards, the Dogormin! Their plan is an attack on the GokaiGalleon...

Joe, becoming GokaiBlue, fights Barizorg, while the other Gokaiger take on the Dogormin. However, Wals Gil appears at the battle...

Furthermore, the Strongest Decisive Battle Machine, Great Wals, flies out from the Gigant Horse. In the Gokaiger's greatest pinch Marvelous is....

This time, will the Earth become just another possesion of Zangyack? What is the fate of Joe and Barizorg's connection? And Marvelous is....?

Because of Navi's Otakara Navigate, the Gokaiger head to Moroboshi High School. Gai informs the others that Moroboshi High is the school that the Denji Sentai Megaranger attended. However, it has been more than 10 years since they were here.

Even if they go there now, is there any chance of meeting the Megaranger? Date Kenta, the former MegaRed, appears in this Legend episode!

From beyond space and time, from the future of the 31st century, a Video Letter reaches the Gokaiger. The Sender? Timeranger's TimeYellow, Domon.

He informs the Gokaiger they must time travel back to "October 2, 2010 A.D." If they go there, a certain great power may be able to be attained....

Pay attention to this episode full of surprises!

-Marvelous is surrounded by ??? in the 37 to 38 summaries, because he is going to have a dream talk with one AkaRed

-It is confirmed that Agent no Metal Alice, Short no ZanKT 0, and Hone no Shitari appear in episode 40. Not only will this episode serve as an explanation for the Gokaiger's VS appearence, but it will also probably be the first chronological appearence of Matrintis (ZanKT 0 being a prototype for the ZanKT Matroids), and maybe explain some stuff about Chimatsuri no Buredoran!
Click to expand...

dukemon22 said:
For the remaining powers:

-Megaranger will be unlocked by the Gokaiger in 39

-Kakuranger's tribute ep will follow the ep with Marvelous' public execution. There's rumors that the Kakuranger are involved in his escape (this would go from ep 43-44)

-45 is rumored to have the Emperor calling on Balzion, and being a Bioman tribute, of sorts

-46 is the would be Fiveman tribute ep, whether or not Basco has stolen this power is unknown

If Basco ends up as the final villain, the Emperor may not be around for too long.
Click to expand...

dukemon22 said:
That's what rumors say will happen. And it makes sense.

Also, it seems there might be a JAKQ episode in there somewhere as well, according to rumor. Here's this batch of rumors:

-Episode 45 is titled "Resurrection Balzion". That title is temporary. It involves Akudos Gil creating a new Balzion and sending it to Earth to challenge KanzenGokaiOh. The Gokaiger require Bioman's Ultimate Power to fight the Anti-Bio Particles.

Gou Shirou, former RedOne, shows up to train the Gokaiger and give them the Bioman's power.

BioHunter Silva will not appear, because his voice actor, Hayashi Kazuo, was unavailable. Instead, Action Commander AquaMesser will pilot Balzion.

Luka looses her Ranger Key in the episode, making the rangers unable to use Big Bomber. The JAKQ Covack is unaffective. The episode will be a Luka focus.
Click to expand...

DAMN ! sounds amazing
i am not very excited about the Go-Onger episode but cant wait for 37-40 and the subsequent ones !
L

Sweet. It's about time that more Pre-Zyuranger tribute episodes will happen. :thumbs: :buttrock:

Plus episode 40 definitely looks promising. Let's hope that Toei doesn't screw that up.

Shinken vs. Gosei subbed right? I have to watch that before Timerangers.

I'm sure that it will be the last tribute episode of the series, because, it's the first Sentai team.

sounds like episode 38 is the debut of kanzen gokaioh.