I'd say that Precure is more of a Sentai-esque series because you have, of course, a team fighting a staple villain group from beginning to end. Sure, there's some Precure teams that have only two members bearing the title of "Cures" in the team but there's usually one or two 'Precure'-like members that help them out. The emphasis on teamwork and friendship is definitely like a Sentai series as well. 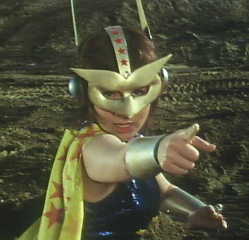 Now, before i delve into the madness that is my ranting mind, let us make something clear: for those who have never seen Pretty Cure, have you ever seen Sailor Moon, Sakura Card Captors, Tokyo Mew Mew, Corrector Yui, Doremi, or any classic Magical Girl Show*? You did? Well, Pretty Cure is absolutely nothing like that.

The Pretty Cure franchise definetily embraces the Magical girl tropes and in some ways it is a prime example of a classic Magical Girl Show, but one of the things that makes the franchise unique is the post modern approach to the material: since the very first season the show has always been quite self-aware, with the character often realizing how absurd their situation is, but the show never becomes a parody because even if the characters remain self-aware, they still play it completely straight.

But what does this has to do with Super Sentai and Kamen Rider you may ask?

Well, you see, while the show does embraces its Magical girl aspects, the truth is that the franchise is played out as a Super Hero Show through and through.

Now, does this make Pretty Cure similar to Super Sentai and Kamen Rider?

It can be argued that the first 5 seasons of the franchise (from Futari wa Pretty Cure to Yes! Pretty Cure 5 GoGo) leaned more towards being a classical magical girl show, but they still borrowed elements and ideas from their senior franchises. After that, the production team behind the franchise changed and from that point onwards they started to borrow more heavily from the Toku and Super Hero genre, something that aligned with an increase on the popularity of the show.

The clearest example of this has to be Fresh Pretty Cure; this was the first season produced by the new team and while it is not obvious at first, the show takes some heavy inspiration from classic Super Hero Toku shows, to the point where there are literally entire episodes that are classic Super Hero stock plots wrapped in the Pretty Cure package.

I actually find this funny because the more classic Toku i watch, the more obvious it becomes. Again, if you have never seen Pretty Cure, donÂ´t assume that just because it involves Magical Girls it has to be just like Sailor Moon***; in the case of Fresh, if you want to get a feel of the show, just imagine a weird mix up of SunVulcan, Jetman and Kikaider 01 wrapped up in a Magical Girl costume. I am so not kidding about that.

From that point onwards the show has really embraced the Super Hero aspect of itself, and even when they are not using tropes of those franchises, they still make nods to them quite often. Case in point, the 500th episode of the franchise (which aired a month ago) is a tribute to Super Hero shows (mostly Kamen Rider and Super Sentai).

Now, as for the actual question of this post, does Pretty Cure resembles more Kamen Rider or Super Sentai?

The answer is more likely Super Sentai since you have the team motif and both shows are aimed at roughly the same age demographic, so they have similar feels. That said, there are times when Pretty Cure goes to dark places that even Super Sentai doesnÂ´t dare to touch, but that feel right along Kamen RiderÂ´s alley (i.e. in Smile Pretty Cure, the main bad guy literally blew a chunk of the earth).

That is my answer, and if you think i am crazy, let me tell you this: i am standing right behind you right now.

*Note: In case you wonder, yes, i have seen all of those shows and more.

**Note: Yes, i have seen all 10 seasons plus the current one and i can confirm this.

***Note: Just to make it clear, i am not bashing Sailor Moon, i love that show, i just want to drive the point that Sailor Moon and Pretty Cure are two very different things.
K

That's a pretty narrow view. There are a lot of similarities to Super Sentai and many of the seasons have been more involving (and dare I say darker) than Kamen Rider. It's an anime and girls are definitely the target audience, but if you're a fan of Kamen Rider and Sentai, you'll probably find a lot to love in Precure, there's even a lot of references in some of the seasons. And don't forget, Precure is actually the third show in the super hero time block, so it's not like Toei are unaware of the similarities.
K

what things in the seasons

have been darker than the things shown in kamen rider?

Clocktower said:
And don't forget, Precure is actually the third show in the super hero time block, so it's not like Toei are unaware of the similarities.
Click to expand...

Technically, Precure is the fourth show in the Asashi/Toei Kids Block, which basically consists of "Yearly Shounen anime", Super Sentai, Kamen Rider and Precure. So while technically Precure is not part of Super Hero Time, it does air right after it and if Toei one day makes it official an adds Precure to the SHT block, i will not be surprised.

But yeah, Toei is perfectly aware of the association between the three franchises, so much in fact that they have been using that relationship to promote the shows for years. For example...

...back in the year of 2006 Toei Bandai lauched this line of childrenÂ´s pajamas of their three Super Hero franchises of that year: Boukenger, Kabuto and Pretty Cure Splash Star. They literally called it the "Henshin Suit and Dresses" line.

This goes back to the point i made before: Toei/Bandai does like to push Precure not as a Magical girl Franchise, but as a Super Hero franchise. For example, last year they aired the Super Hero Taisen Movie and the Precure All Stars New Stage movie back to back as part of their "Super Hero and Super Heroine Summer Special". Yes, that is how it was called.

But going beyond what Clocktower said, yes, Precure is full of nods and in-jokes towards their "elder-brothers", and often times you will only get these jokes if you watch all three shows.

Also, there was that time that Cure Heart got married to Kamen Rider Wizard.

Ivanhobe said:
Also, there was that time that Cure Heart got married to Kamen Rider Wizard.
Click to expand...

Married Wizard's eyes and mouth were the single most horrifying thing I've seen that year.
K

PreCure is the sole reason, why we can't have a proper amount of female Riders.
"KR for boys and PreCure for girls" is just one big bullshit. And because of that we can't have some unusual series, that can have different approach and formula to both series. So yeah, it's "just a Kamen Rider" and "just a PreCure" every year, with some rare exceptions.

PreCure isn't strongest thing in Magical Girl genre. People who will call it a cheap SailorMoon ripoff would be absolutely right. SailorMoon a lot better and way more awesome. Still, every PreCure delivers lots of fun.

I wouldnÂ´t say that Precure is the sole reason why there arenÂ´t many Female Riders.

These are merchandise driven franchises and it is obvious that Kamen Rider tries to cater to young boys, it just so happen that boys would rather role play as Male heroes than as Female Heroes.

We could write entire books about the reasons for the lack of Female Riders, but the existence of Precure would hardly be the main one. It probably does have an impact, but only in the sense that with Precure having the young female market covered, Kamen Rider has very little need to cater to them, not that it has ever even tried to begin with. ThatÂ´s how different demographic targets work.


Kamen Rider IXA said:
People who will call it a cheap SailorMoon ripoff would be absolutely right
Click to expand...

Now, i do have an issue with this statement.

I love Sailor Moon as much as the next guy, and i also love Precure, so i can say beyond any reasonable doubt that Precure is NOT a Sailor Moon rip-off.

Seriously, this argument is so wrong that is not even worth discussing. LetÂ´s just say that while Precure does make a nod to Sailor Moon from time to time, that is mostly because Sailor Moon is an incredibly influencial piece of media that almost everyone recognizes. Precure and Sailor Moon are two entirely different Beasts in terms of themes, characters, plots and what have you, the only reasonable comparison one could make is that both shows are about girls who transform and fight evil, but that is because they are in the same genre. Beyond that, Sailor Moon and Precure are two completely diferent takes on the same concept and nothing else.

Really, the only people who i know who would even state that Precure is a Sailor Moon rip-off are people who are either incredibly biased towards anything that is not Sailor Moon, or Trolls.
You must log in or register to reply here.

Can someone introduce to me a good fanpage/forum of Pretty Cure?