Yes, Garo is back for it's third animated entry, and this time it's ditched all the historical pretext in favour of a modern day (American?) setting.

Our new Golden Knight is Sword, a big musclehead who loves two things: comically ginormous boobs and comically ginormous steaks (in that order). Ironically given his name, he seems to much prefer fighting with his fists, and he's voiced by the guy who previously voiced the Gokaiger's Mobirates phone (and GlenFire, if you prefer Ultraman touchstones).

Along with Zaruba (who seems to be able to control an oversized motorbike that looks like something Ghost Rider would love), Sword is searching for the answers to a mystery known only by the keyword "El Dorado" when he encounters a little red-haired girl called Sophie, whose own investigations into the same conspiracy lead her into a Horror's trap. Hearing him mention "El Dorado" in passing, Sophie decides to look further into her unusual saviour. 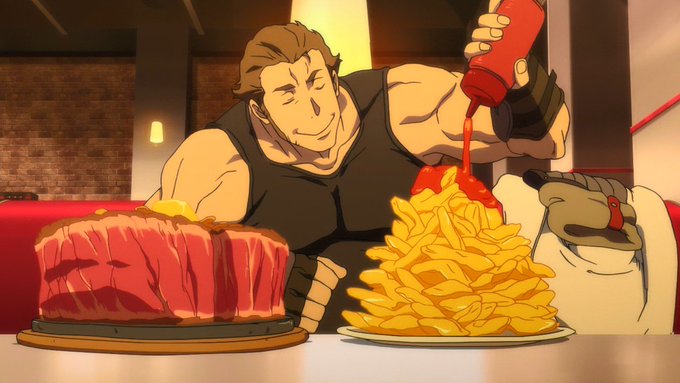 I wonder if the bike is an evolution of Gouten or something wholly separate?
You must log in or register to reply here.

Comments on Garo: The Moonbow Traveler