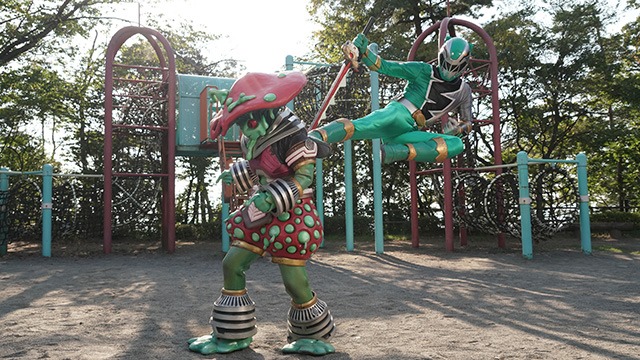 Thou shalt love the country in which thou wast born.

Welcome to the discussion thread for Dinoknight Sentai Ryusoulger, episode 36; "The High-Speed Bodyguard".
(Show's title and episode title translation may vary depending on your fansub group of choice.)
This week: Following their first few battles with Pricious, the Ryusoulgers strive to train harder in order to defeat their latest foe. However, Towa fails to appear for training and to stop a Minosaur attack. When they investigate, the Ryusoulgers find him on a date.

This thread was made with Toku Prime's permission. And remember, this is a SPOILER ZONE! If you are trying to avoid spoilers, this is not the place for you.
HOWEVER! This is not the place to discuss future episodes nor next-episode previews. You may discuss previous episodes and related subjects, but stick to the episode at hand. Please be considerate of those who haven't watched ahead yet. Thank you.​

A little late, but that’s because I had a lot of Christmas prep to do last week.

Can I just say that it sure was satisfying to see Kreon get revenge-kicked by Towa? He had that coming. They could have not even thrown that scene in, and usually I like this character, but this episode was one of his more heartless moments. I expected this to be a silly episode, but it really wasn’t that bad. Also, I think the training session at the start of this episode was probably more challenging than those cliff trials from episode 35.
You must log in or register to reply here.