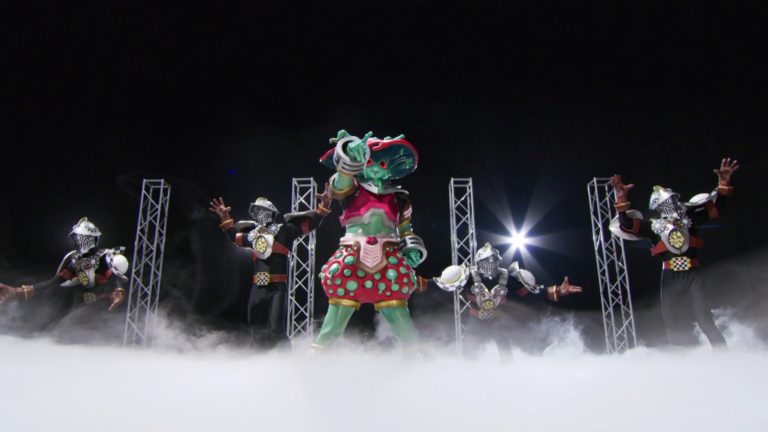 Those who don't fight won't survive!!

Welcome to the discussion thread for Dinoknight Sentai Ryusoulger, episode 25; ""A Dancing Kureon".
(Show's title and episode title translation may vary depending on your fansub group of choice.)
This week: Kureon puts out a viral video starring himself and Dorun Soldiers dancing like crazy, as well as a hidden Minosaur capable of stealing the souls of anyone who watches the video! When Ui, Oto, and Tyramigo have their souls stolen, the Ryusoulgers will have to enter cyberspace in order to save them and stop the Druidon.

This thread was made with Toku Prime's permission. And remember, this is a SPOILER ZONE! If you are trying to avoid spoilers, this is not the place for you.
HOWEVER! This is not the place discuss future episodes nor next-episode previews. You may discuss previous episodes and related subjects, but stick to the episode at hand. Please be considerate of those who haven't watched ahead yet. Thank you.​
D

Yet again another episode where they find the enemy placement because the script told them. Also, god damn are the rangers lucky. Out of all of those balls in Wyzul's jar they just manage to knock out Tyramigo's. Oh, and it was nice that the monster in the internet just managed to come back together after the video was deleted.

You know what would have been funnier? Had the video been taken down by a copyright strike.

I seriously enjoyed this episode WAY more than I should have! From Kreon’s song & dance number to how he randomly made a human friend (I could easily see him becoming a reformed villain). And also, I finally see why Kreon doesn’t have the closest relationship with Wyzul. Not that I think Tankjoh was any better, but still... I always noticed some hesitation with Kreon, but now it finally makes sense. Wyzul’s basically an abusive manipulator that just uses him for grunt work. In fact, I honestly thought that seeing how Wyzul treats him and his dance number would make Melto feel bad about what he said to Ui. But they avoided being predictable, so props to that!

Also, I didn’t expect this, but they canonized the ED theme! Now it all makes sense. The reason we have such a bubblegum pop ED, why it looks so home-made with still-image graphics, jump cuts, why Bamba is dancing even though he normally would never do such a thing… It was all Ui’s idea! She’s a YouTuber with some rough video editing skills! I know some people were not happy with the ED theme for this show, so I hope this makes it slightly better? Or maybe it's just me. I have a weakness for when a Sentai canonizes its own ED theme and dance number.


Dr Kain said:
You know what would have been funnier? Had the video been taken down by a copyright strike.
Click to expand...

Okay, for once, I'll give you that. Especially since Kreon's reaction would probably be something like "You gotta be kidding me! It's MY song. Who even claimed it anyways?!"
But I also like the fact that Kreon deleted his video just because Wyzul trash talked all his hard work. I kind of think Kreon should have at least used that opportunity to walk away from him, but Kreon's the one-dimension kid character, so he'll probably stay with Wyzul til the very end (whether that be Wyzul's end, or the end of the show, whichever comes first).
You must log in or register to reply here.